GUATEMALA CITY, Jul 21 2010 (IPS) - “There are hardly any tourists now, and nearly all the hotels are empty,” says Rosa Rosales, who works at the Hotel Pa Muelle, on the shores of Guatemala’s Lake Atitlán, a natural treasure that has been overcome by pollution. 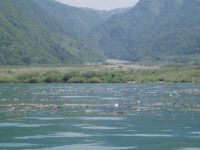 “The view of the lake is beautiful and the water looks very blue,” but the tourists don’t trust it, said Rosales, who works at one of the 281 hotels that dot the shore of the lake, located in the southwestern department of Sololá.

According to the Chamber of Commerce in Panajachel, the municipality with the largest number of hotels on Atitlán, more than 60 percent of the reservations for the year-end holidays were cancelled due to reports that the cyanobacteria Lyngbya hieronymusii (a blue-green algae) had been found in the lake.

Atitlán is one of the country’s main tourist centres, and attracts 20 percent of foreign visitors, according to the Guatemalan Institute of Tourism.

The contamination of this 125-square-kilometre natural jewel has also taken a toll on the farmers, artisans and fishers from the 11 municipalities that surround the lake and whose livelihood depends on it.

“Since the cyanobacteria appeared, fish sales have plummeted because people think it is toxic,” said Juan Chocoy, a member of the local artisanal fishers association in San Juan La Laguna.

The two species of rushes (Typha dominguensis and Scirpus californicus) that grow along the shores of the Atitlán and help filter and oxygenate its water have nearly disappeared because the plants have been harvested to make hats, baskets and other items.

In October 2009, the lake’s surface was covered by a brown layer — the sewage from nearby towns and runoff from fertilisers used on local farms.

Scientists identified the cyanobacteria, algae that feed on phosphorous and nitrogen, capable of producing toxins that affect fish, crustaceans and aquatic plants, and can be harmful to human health.

The news prompted action from the government, environmentalists and residents to seek solutions. But nine months later, the situation has not improved.

In late May, tropical storm Agatha only made things worse, because “it swept mud and rocks into the lake. We haven’t been able to work because the fish have dispersed and don’t have a place to lay their eggs,” said Chocoy, the fisherman.

“Agatha left the lake in a more critical situation because the sediments hold a lot of nutrients,” which feed the cyanobacteria, Anna D’apolito, director of the non-governmental organisation Friends of Lake Atitlán, told Tierramérica.

The real problem is the lack of resources, which means there are no wastewater treatment plants or solid waste disposal systems to prevent it from ending up in the lake, she said.

Tests by the Jesuit Rafael Landívar University’s institute of agriculture and natural resources in 2008 found e-coli and other faecal bacteria that can cause diarrhoea.

The study concluded that in 2002-2003 the lake received some 972 tonnes of nitrogen and 381 tonnes of phosphorous from agriculture.

Other factors, such as the introduction of exotic species and the advance of climate change, have also contributed to the lake’s contamination, according to the scientists.

Juventino Gálvez, director of the Institute, told Tierramérica that the structural causes remain intact. Problems such as unregulated land use, inadequate solid and liquid waste management, and the lack of power of environmental agencies have not been resolved.

The severity of the case led the United Nations Environment Programme (UNEP) to include it in the report “Latin America and the Caribbean: Atlas of Our Changing Environment.”

According to the Atlas, on Nov. 22, 2009, the U.S. space agency NASA detected that 38 percent of Lake Atitlán’s surface was affected by the blue- green algae. A preliminary version of the study was presented in April at the 17th Meeting of the Forum of Environment Ministers from Latin America and the Caribbean, held in Panama.

“They say they planted rushes and that they installed some aerators, but who knows if they work?” Mayor José de la Cruz, president of the Sololá Association of Mayors, told Tierramérica.

“The government has spent more resources on publicity and promotion, but its support for resolving the lake contamination hasn’t arrived,” he complained.

Meanwhile, Nery Paz, director of the Sustainable Management Authority of Lake Atitlán and Surroundings, said it is not exclusively the government’s problem.

“The people continue to believe that the government should solve everything, but we are all responsible. What does a solid waste treatment plant matter if people keep throwing garbage in the street?” he said.

In January, the government and the communities agreed on some paths of action, such as creating a body to monitor waste collection, restructuring drainage systems and installing new waste treatment plants.

The measures are now being implemented, according to Paz, who stressed: “We all have to participate.”