PORT-LOUIS , Jul 14 2010 (IPS) - “Instead of moaning all the time, why don’t you create your own (political) party?” some men asked Brigitte Rabemanantsoa Rasamoelina, a female politician from Madagascar. She accepted the challenge and in February formed Ampela Mano Politika, a political party which started with only 22 female members and now has over 5,000 female members … and 10 men. 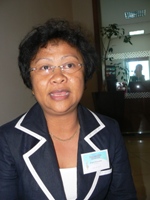 With female political representation standing at only 3.75 percent in Madagascar, a women’s lot is very precarious, says Rasamoelina.

And so too is the situation for many women in most of the Indian Ocean Islands. Female political representation is a mere three percent in Comoros, 18 percent in Mauritius and 23.5 percent in the Seychelles.

It is one of the reasons why Rasamoelina and 30 other women from the Indian Ocean Islands, gathered recently in Mauritius to identify ways to attain parity among men and women in politics in an event organised by the Indian Ocean Commission and Women in Politics (WIP).

“There are only 67 female mayors for the 1,557 regional councils and not a single female among the 22 heads of the regions,” Rasamoelina says of the female representation in Madagascar.

While the situation in the Seychelles may be slightly different, with claims that women do not face the same discrimination as on other islands, representation is still low at 23.5 percent in light of the country’s commitment to the SADC Protocol on Gender and Development – which commits countries to work towards the goal of having 50 percent women in political and decision-making positions by 2015.

And in Comoros, a relatively conservative Muslim country, only one woman sits among 33 men in Parliament. While the challenges facing women in politics are different on each island, they are also similar in many respects.

Rasamoelina observes that in Madagascar a major obstacle to women’s participation in politics is motivated by the local customs and traditions which say that men only should rule.

“Women are put in front when there is need to support and to applause. We are not just machines to give the breast to a child and to procreate. This is not our weakness but an added value to the society,” says Rasamoelina.

More women in decision-making processes, she says, would allow women’s voices to be heard. Women’s rights organisations are asking for Madagascar’s new constitution to include the requirement for gender equality in all aspects, including politics.

But in the Seychelles things are different. Men make room for women in politics and the percentage of female representation is the highest (23.5 percent) in this Indian Ocean island.

Linda William, the Principal Secretary at the Social Development Department, says there is no discrimination against women in her country and political parties elect people who are capable – be they men or women.

“Evidently it is through education that women play a role in politics in the Seychelles. There is no religious or cultural barrier for women to be involved in politics. I would say it is a matter of choice.”

William says the Seychelles is well placed to reach the 50 percent of female representation at the 2012 elections. But in contrast, in Comoros women are barely involved in politics and are literally absent from any decision-making process. Here the situation is blamed largely on a lack of self-belief.

“The Comorian woman lacks confidence. She is satisfied with her job in the public sector,” says Echati Chadhouli, a member of the National Network of Gender Lawyers (RENAG).

She does not blame men for lack of female representation in Parliament, claiming that educated men would not prevent women from entering the political field.

“We had some difficulty earlier with the religious leaders but no longer. Women are now free to enter politics and to seek higher positions. But since they are not fully sensitised, the Comorian women keep people waiting for them,” Chadhouli says.

In the French colony, La Réunion, men do not want to share power so easily, says Nassimah Dindar, president of the General Council, who also acts as head of the government of the colony.

“In spite of the legislation on parity on the regional and municipal election list, there are still many hurdles from political parties that women have to climb before succeeding,” she emphasises.

She finds it easy for men to tarnish the reputation of women and to destabilise them in politics. “This is why many women are not interested in politics fearing to get hurt in this battle of the cocks,” Dindar told IPS.

In Mauritius, it is still difficult for a woman to get an election ticket. Here a candidate must be nominated by the leader of their political party before they can stand for elected office. The alternative is to run as an independent candidate.

Aline Wong, obtained an election ticket from the ruling party “Alliance of the Future” but was not elected to office in the country’s May elections. Wong says men have always dominated the political field while women are just starting and need some time to find their place on this route full of hurdles.

“The party needs winning candidates. Since the leaders think women have got less chance to win, they nominate only a few of them,” Wong observes, putting the blame on the lack of a strong lobby for women.

But Bruno Woomed, a member of WIP, who monitors the move to improve female representation in politics in Mauritius, thinks change will only take place through legislation and the introduction of a system of proportional representation and a temporary quota for women.

“If we leave it to the goodwill of political parties, nothing will change,” he says.

The women have committed themselves to mobilise society in favour of female representation by 2015 by creating platforms to develop a network among the countries where experiences and the best practices will be shared. This network of female leaders is already in operation.