NAIROBI, Jul 26 2010 (IPS) - The government of Kenya has been encouraging women to deliver in hospital. Home deliveries by traditional birth attendants are considered to be a major contributor to maternal deaths. 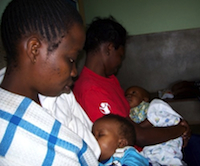 Kenyan maternity clinic: less than half of births take place in facilities like these. Credit: Kenneth Odiwuor/IRIN

TBAs are said to be ill-equipped to notice danger signs that could be fatal. The government has proposed banning traditional midwives altogether.

According to the last demographic health survey, released by the government in 2009, Kenya has one of the highest maternal death rates in the world at 448 per 100,000 live births. Home deliveries are believed to be a major contributor.

“When a woman goes into labour in the middle of the night in Mathare slums,” Elizabeth Sibuor, a traditional birth attendant in Nairobi, “the option of getting a taxi is out of question due to the cost and insecurity.

“Such women end up delivering with the help of TBAs. Pregnancy and labour is a matter of life and death, I will not sit back and let a woman and her baby, die if I can offer assistance.”

The 2009 demographic health survey shows less than half of women deliver under the care of a skilled attendant in Kenya. Fifty seven percent give birth at home with 28 percent assisted by a traditional birth attendant.

A group of women huddled together sitting on stones in front of traditional birth attendant Elizabeth Sibuor's home in Nairobi's Mathare slum. One of them, 21-year-old Eunice Okoth, is heavily pregnant, her face anxious. She rises as quickly as she can and follows Sibuor into her one-roomed house.

The two disappear behind a curtain that confers a thin privacy on the consulting room and bed on which Sibuor has delivered countless babies.

Whatever Sibuor says and does behind the cloth has the desired effect; when Okoth re-emerges, the anxiety has lifted from her face.

"She is experiencing early labour but it is not yet time," Sibuor tells IPS later. "When a woman is almost due, the way begins to open up in preparation for the baby and this is what causes pain. I have given her some traditional herbs to ease the pain but now she must ensure she gets rest."

"(Elizabeth) delivered my first baby smoothly," Okoth says. "I want her to be with me when I deliver this baby because she is understanding and treats me with respect and care. I am not yet due but I am having some pain, she has given me some medicine (herbs) and I believe I will be well and will deliver this baby at the right time."

Two thirds of Kenya's maternal deaths are attributed to postpartum haemorrhage (severe loss of blood during or after labour ), sepsis (bacterial infection in the blood), eclampsia (hypertension during pregnancy) or a ruptured uterus: all conditions that a birth attendant like Sibuor is unable to deal with.

But despite being aware of the advantages of delivering in hospital and greatly reduced costs at local health centres - in the clinics run by the Nairobi city council, for example, the fee for delivery is just 20 shillings, roughly 25 U.S. cents - yet women like Okoth continue to seek the services of TBAs.

Ready access remains a key factor - the Nairobi clinics are only open during the day. If a woman goes into labour outside of regular office hours - or experiences complications - she will have to go to a larger government facility, where a 4,000 shilling deposit will be demanded - 50 U.S. dollars is well beyond the means of most women.

"Labour does not choose a particular time nor does it only come during the day when you can easily access a hospital," says Elizabeth Sibuor, a traditional birth attendant in Nairobi.


Sibuor charges 500 shillings – roughly six dollars – for a delivery; compared to 4,000 shillings ($50) if a woman gives birth in a government hospital.

She often remains unpaid by her clients; of those who do, many settle their bill in small installments or in kind through gifts. Some cannot afford to make any payment, but she says she turns no one away.

Dr Isaak Bashir, the head of Reproductive Health in Kenya’s Ministry of Public Health and Sanitation, is emphatic the government should not recognise TBAs and that women should give birth with support from medical practitioners.

“For anyone to be recognised as a qualified birth attendant they must have commensurate papers from a recognised medical training college. The country is not short of qualified nurses and midwives. Institutions of higher learning are churning out enough candidates, what needs to be done is hire new people,” Bashir says.

But Monica Ogutu the executive director of Kisumu Medical and Education Trust (K-MET) says the health system has failed the women of Kenya.

“No woman wants to deliver at home. The health system is failing women. When a woman is in labour, she needs someone to listen to her and offer comfort. One midwife attending to 10 women at once will not have time for such a woman. This is one of the various reasons why women are opting for the services of traditional birth attendants,” says Ogutu.

While the government’s ban on TBAs may be well-intentioned, Ogutu says the move is dangerous.

Instead of demonising them, Ogutu argues the government should reinvigorate previous efforts to train TBAs as a bridge between the community and the public health system.

“For hundreds of years, TBAs have helped birth our nation and they are highly regarded in some communities, especially rural areas. Banning them will not make women who seek their services go to give birth in hospitals,” Ogutu says.

Sibuor insists that government – and women – have nothing to fear from traditional birth attendants.

“I have lost count of the number of women I have assisted during delivery in my over 20 years experience and no woman has died under my care,” she says. “When I notice danger signs, I accompany the woman to the nearest health centre.

“I encourage the women to attend clinic and also take their children for vaccination. I also insist they must get tested for HIV and if they are positive, I do not agree to deliver – they must go to a health facility.”

Sibuor says women such as Okoth will continue to rely heavily on TBAs. Instead of being perceived as incompetent, she wants the government to identify credible TBAs and help them to improve their service.

The Kenyan government, like other African governments, is wrestling with the challenge of extending adequate services to meet its commitment to reduce maternal mortality by two thirds by 2015 compared to 1990 levels. The government acknowledges the important role played by TBAs, says Dr Bashir, and is in the process of coming up with a charter to re-orientate them as birth companions.

It will be essential to accurately assess the quality of care given by women like Sibuor, and find an appropriate place within the country’s public health system.