LILONGWE, Jul 13 2010 (IPS) - Mable Malinda wants to contest the local government elections but the independent candidate who is using her life savings to fund her campaign only has 500 dollars left in her bank account. She has already spent three times as much buying handouts for voters – an unofficial requirement when contesting elections in Malawi. 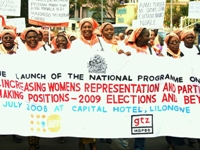 Women contestants cannot afford to meet the material demands of the voters on their own. Credit: Claire Ngozo/IPS

“This is not going to be enough because the voters want more and more handouts. I am thinking of abandoning the campaign altogether. It is proving to be a very expensive mission. I have already spent 1,500 dollars since I launched my campaign two months ago,” the 53-year-old from the southern district of Mulanje told IPS.

Many of the female candidates intending to contest Malawi’s November 2010 local government elections are dreading the worst because, like Malinda, they do not have enough financial resources to compete favourably against their male counterparts. And with less than four months to go before the elections, the organisation set up to distribute government and donor funds to female candidates has yet to receive its funding.

In Malawi election campaigns are expensive because voters expect candidates to distribute handouts, such as T-Shirts, cloth, food items and even money during campaign rallies and door-to-door campaigning, as a sign of ‘compassion’ to their constituents.

James Khoviwa, a voter from Malinda’s district told IPS that those candidates who are not able to provide freebies during election campaigns will not be voted into positions. Khoviwa’s sentiments are commonly shared by many voters in Malawi.

“How can we expect them to take care of us when they’re in power if they cannot demonstrate compassion towards their constituents during the campaign? We do not want to vote into power stingy leaders. We are able to know who is generous or not based on the amount and extent of the handouts they distribute in the run-up to the elections,” said Khoviwa.

Malinda said women contestants cannot afford to meet the demands of the voters on their own. She told IPS that the expectations by voters are not fair but that the tendency of distributing handouts started in 1994 when the country ushered in democracy.

But these expectations along with the lack of funding have had many female candidates considering dropping out of the race because of their lack of financial resources.

Emma Kaliya, chair of the NGO Gender Coordination Network, which is the leading implementer of the “50/50 campaign – 2009 and beyond”, acknowledges that the money to finance female candidates’ election campaigns has not been made available yet.

Malawi developed the programme in 2008 responding to the 50/50 requirements before the SADC Gender and Development Protocol was adopted. The campaign is coordinated by the Ministry of Women and Child Development with support from international donors including the United Nations.

In the country’s May 2009 parliamentary elections, women candidates were provided with campaign materials and money through the 50/50 campaign. A record number of 237 female candidates competed in the elections and 42 women were victorious. It increased the representation of women in Parliament from 14 to 22 percent.

The 50/50 campaign was also meant to financially assist female candidates in the upcoming local government elections but the money has yet to arrive from government donors.

“It’s only three months before the elections and yet we do not have the funds in place to finance campaigns for the women candidates. It’s a fact that campaigns in this country are so commercialised and women are usually disadvantaged. We need money urgently if we are to assist women to make it in the elections,” Kaliya told IPS.

She worried that the late delivery of funding will end up hindering women’s chances of competing fairly since many male candidates have already begun campaigning with vigour and distributing campaign materials.

Kaliya added that budget for the 50/50 campaign for the local elections is not much. “Actually, I think it’s a mockery to the process,” she worried.

The current budget is only about 667,000 dollars for 443 wards compared to the 3.3 million dollars that was allocated for the 50/50 campaign for 189 constituencies in the parliamentary elections last year, according to Kaliya.

Assistant resident representative of the United Nations Development Programme (UNDP) Fred Mwathengere told the local media that funds for the 50/50 campaign are available.

“Some logistics in the financial support will be handled by the UNDP. We are consulting with the Ministry of Finance and the Malawi Electoral Commission on how this should be handled,” said Mwathengere.

Meanwhile, women aspiring to contest in the elections continue to struggle to meet the demands of voters while awaiting assistance from the 50/50 campaign.

“We know that elections are competitive but as women we are already at a disadvantage because most of us do not have the same financial muscle as men,” Malinda said.

“People are now so used to receiving handouts and one is really deemed tight-fisted if you do not distribute anything to the people. I do not believe that handouts are the best basis for identifying a good leader; it is the development that you lobby for that is more important,” she added.