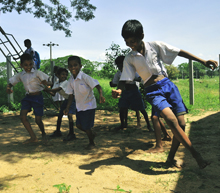 Pupils at the Periyapillumalai school, which is functioning once again after the war ended in 2009. Credit: Amantha Perera/IPS

The 52-year-old grandfather was forced to leave Periyapillumallai, a village located deep in Sri Lanka’s eastern Batticaloa district, with his family in 1991 when ethnic tensions boiled over. Punchibanda is from the majority Sinhalese community, but lived in a village that bordered areas inhabited by the country’s minority Tamils.

The Liberation Tigers of Tamil Eelam (LTTE) was by then waging a bloody sectarian war, demanding a separate state for the Tamils carved out in this South Asian country’s north and east. Regardless of ethnicity, civilians were caught in the fighting and paid a heavy price.

“We fled because we knew we would be killed,” Punchibanda told IPS.

For 19 years, Punchibanda’s family was among the war-displaced, settling in the Mahaweva area some 10 kilometres away. In those 19 years, the war turned bloodier, with at least four failed attempts at negotiating a settlement.

Seven months after the war ended in May 2009 with government forces wiping out the Tigers, Punchibanda ventured back home.

Only seven of the 172 Sinhalese families living in Periyapillumallai when Punchibanda left returned with him in December 2009. The number has whittled down further – only three families still remain.

“Life is hard, the jungle has taken over our houses and crop land,” Punchibanda says, looking at the thick bush that surrounds the little plot he has cleared and planted maize in. “We hardly know anyone here, but it is our village.”

He and his wife work the land tirelessly under the scorching sun. At night, they ascend treetop hideouts to guard their crops against marauding elephants. Despite the hardship, Punchibanda is happy to finally return home after almost two decades. “My children or grandchildren will never come here. They don’t feel any connection, but I do,” he says.

This same ‘connection’ has brought Mohamed Aifa, a 62-year-old Muslim woman, and her husband to the adjoining village of Rukam. Like the Sinhalese, the Muslims were forced out of Tiger-controlled areas.

Aifa’s family fled the village in the mid-1990s, with Muslims unable to work in their fields and attacks were reported in the night. Incidents like the August 1990 massacre of 147 Muslims inside a mosque in the nearby town of Kathankuddi, purportedly by the Tigers, drove fear into Muslims living in areas under the Tigers’ yoke. Almost all subsequently fled.

“We lived in Chenkalady (a town about 30 km away), where the government was in control,” Aifa says.

Unlike the Sinhalese, who remain a mere handful in areas formerly under the Tigers, many Muslims have begun to flock home following the end of the war. “We feel safe here. There is good fish in the tank, there is a good market in the town,” says Aifa, as one of her relatives bundled together 500 rupees (4.4 U.S. dollars) worth of baked fish. “We already have a buyer for that. Who knows, life may be better here,” she says.

While most Tamils in areas like Periyapillumallai and Rukam remained behind when the Tigers gained control, they too fled during heavy fighting, like those in mid-2007 – the last of the battles the Tigers fought in the east. Over 130,000 civilians fled to safer areas behind government lines in Batticaloa district.

It has been two years since Krishnan Ramanadan, a 52-year-old father of three daughters, returned to Periyapillumalai after fleeing the fighting.

He lives in a small hut with a roof of coconut leaves, and his fishing gear hangs on a tree nearby. But he has a complaint: “There are too many people fishing in the tanks now. Those days, people were too scared go fishing. Now everyone goes fishing, even those who work the paddy fields, when they don’t have work,” he says.

Despite the overcrowded fishing spots, life is looking up. Ramanadan is building a brick house, and his daughters are happy that they can now live without fear of forced conscription.

His eldest, Saroja Devi, had to abruptly end her education when her parents decided not to send her to school. In fact, they decided not let her out of the house for anything, in 2006, when the Tigers went on a forced recruitment spree and were abducting students on the way to school. “It was that bad,” Devi says.

Things have improved greatly in the last two years. There are fewer Sri Lankan soldiers and checkpoints. Public administration is slowly returning. If the dilapidated canal system is repaired, Ramanadan says, many will return to paddy cultivation.

Of course, there are still problems, including an acute shortage of housing, an abysmal public transport system, and a shortage of jobs. Officials say hundreds of war-ravaged houses need to be rebuilt, over 340 ofthem in Periyapillumallai alone. But all these problems can be sorted out, without bullets flying around.

Life is still a hard grind here. But there is now a sense of hope.

Communities that have been kept apart for decades by guns, bombs and mayhem have come together to live shoulder to shoulder – by choice or otherwise. The healing will take years, maybe generations, but it has begun.

“Maybe we can live like what it was before, like ordinary human beings, and not animals killing each other for a plot of land,” Punchibanda says.