KAMPALA, Jul 2 2010 (IPS) - July 1 marked the moment when the East African Community common market protocol kicked into operation. But Ugandan women face several obstacles before they will benefit from the boost that the protocol gives to the free movement of goods, labour and capital. 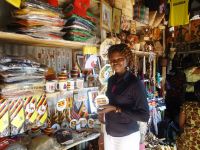 Regional integration, which began with the signing of the east African customs union protocol in 2005, has increased export opportunities and expanded production in the agricultural sector where women predominate, cultivating 80 percent of agricultural products taken across borders.

It should give women the opportunity to be more active as traders, to raise their incomes and reduce poverty. But “the odds are against women, especially rural women, when it comes to competing regionally”, says the executive director of the African Women’s Economic Policy Network (AWEPON), Daisy Owomugasho.

“Thinking of women, one has to multiply the challenges men face, such as illiteracy, access to information or credit. If you open up borders and you are supposed to compete regionally, Ugandan women are in trouble. Women remain with limited access to credit, information and resources”, she argues.

Economists say these constraints reduce women’s ability to benefit from regional integration. Regional policies so far do not enhance equal participation and opportunities between women and men.

The East African Community (EAC) is drafting a gender and development protocol but, fears Owamugasho, “drafting is one thing and implementation is another”.

She is an international trade consultant and the vice chairperson of the Uganda Women Entrepreneurs Association (UWEAL).

Unless women are empowered to become active participants in the process, the common market will not benefit the common woman, she insists.

“The biggest challenge is: do these women know what the opportunities are? Do they know what their rights are under the law? What is supposed to happen at the border post under this new regime, compared to what has been going on?” Tuma asks.

“Actually they do not know and I think that is the biggest obstacle preventing women from doing better at regional level,” she answers herself.

“For the past five years we have been operating under a customs union arrangement. But even with the customs union, women did not know and understand it. Now, we are taking another step (Common Market) when even the first step was not understood and utilised,” Owomugasho says.

For instance, she says, many women still do not know that the market is now open for them to sell their agricultural produce in any of the east African markets. Middlepersons are taking advantage of that ignorance.

Indeed, handicrafts dealer Lucy Kyogonza gets a blank look when asked what she knows about the common market protocol, let alone the customs union. “This is the first time I am hearing those big words,” she remarks.

Although many of the items in her stall are from handicraft traders from neighbouring Kenya, Kyogonza has never attempted importing or exporting goods as part of her own business because she is worried about taxes.

“We are heavily taxed at the border and this discourages us from cross-border trade. Taxes affect our pricing because the goods become too expensive and the profit margins get smaller,” she tells IPS.

In 2007, Ugandan women trading in handicrafts clashed with women from Kenya selling handicrafts at much lower prices. The situation led to a standoff and was only resolved with the intervention of Uganda’s ministry of trade.

The Kenyan traders argued that they were utilising the opportunities within the EAC framework but the Ugandan traders felt that the laissez-faire approach was undermining their business. This shows how little informed Ugandan women remain about the implications of regional trade policies.

Another lacuna is that the protocol will initially only apply to professionals like doctors, engineers and architects who will be able to move freely across borders. Most women will not gain from this as many work in agriculture while very few women are professionals.

Tuma ascribes this to, “women running households and looking after children and making sure that when the husband comes home there is dinner — while men are busy networking in their ‘homeboys’ clubs’. Women are cut out of that networking.”

Owomugasho points out that there has been a lack of consultation with stakeholders such as rural women farmers. “Governments say they have consulted, but their consultations were not wide and effective. Consultation should have been a participatory process and acceptable to everybody.

“They should have asked the people if they wanted integration or not. Governments are making decisions for us; deciding what is good for us. We don’t have a say in whether we want to integrate now or not. Then people would have understood and maybe gone along with it,” she suggests.

Tuma believes the immediate task ahead is inform women about the available opportunities and what they need to do in order to take advantage of them.

Another objective is to formalise cross-border trade and put in place ways to effectively track its economic contribution through gender-disaggregated statistics. “To further protect women, legislation that punishes those who exploit cross-border traders in any way should be put in place,” Tuma adds.