AFRICA: ‘Welcome to My Taxi – Let’s Do Business with My Cellphone’

JOHANNESBURG, Aug 31 2010 (IPS) - In cities across Africa, being an entrepreneur requires no office, business card or investors. All it takes is a cell phone, according to Adele Botha, a researcher at the Council for Scientific and Industrial Research (CSIR) in South Africa. 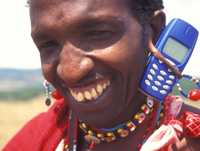 A pastoralist Maasai shows off his mobile phone in Kenya. Credit: Neil Thomas/IRIN

Mobile phones have made deep strides into the African market in recent years, and are becoming important tools for helping rural and urban populations stay connected and promote business.

Presenting her research at the CSIR’s Third Biennial Conference on Aug. 31, Botha detailed how phone access can be used as a money-making tool.

In Lusaka, Zambia, Botha said she encountered a taxi driver who would make money by researching and diagnosing people’s diseases using his phone’s internet browser. And in rural Kenya, Botha said she interviewed an orphanage worker who used to make money by hiring out her phone for use, until other people in town got their own mobiles.

Between 2003 and 2008, the number of cell phone subscriptions grew from 11 million to 246 million, faster in Africa than anywhere else in the world, according to the International Telecommunications Union. And while less than three percent of rural areas in Africa have landline telephone connection, the ITU estimated that over 40 percent of these areas have phone access via cell phone.

While Europe’s technology infrastructure was centered on the personal computer, Botha said Africa, and much of the developing world, is basing its infrastructure around the mobile phone.

“The developing world is coming into the information era with a development-centric point of view,” Botha said, with communities embracing the mobile phone for its ease of use and ability to proliferate among communities.

While there is a trend among wealthy mobile phone users to buy expensive phones with internet or Bluetooth capability, Botha said most phone users need only three capabilities to be connected with each other: text and voice messaging, and Unstructured Supplementary Service Data, which allows phones to communicate with their service provider.

“If you want to connect to everyone, this is what you need to have,” Botha said.

Recognising the proliferation of mobile phones in South Africa, CSIR’s Meraka Institute, with funding from the Department of Arts and Culture, worked to develop Lwazi, a cell phone-based system to disseminate government information.

Lwazi has been tested over the past two years in six municipalities across the country, ranging from rural to urban, according to Aditi Sharma, a CSIR researcher who helped develop the system.

“In rural areas with no (landline) service, you can still get information,” Sharma said.

Using the system, people without the internet can call a hotline for access to government information, Sharma said. Additionally, the automated system is available in all 11 of South Africa’s official languages, according to information provided by CSIR.

“Through the piloting of project, we have shown that automated telephone is an effective means for facilitating dissemination of information,” Sharma said.