BIODIVERSITY: An Ocean of Crustaceans

VIENNA, Aug 14 2010 (IPS) - What lives in the world’s oceans? Crabs mostly, according to the Census of Marine Life, a 10-year research effort. 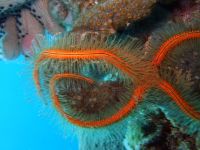 The brittle star is a common nocturnal echinoderm found in the Caribbean. Credit: César Herrera - Census of Marine Life

Crustaceans like crabs, lobsters, crayfish, shrimp, krill and barnacles account for 19 percent of all species found in 25 key global ocean areas, according to the Census, which wraps up its work in October.

Fish, including sharks, represent only 12 percent of all species in the oceans, based on the information collected over centuries that has been combined with new data collected during the decade-long Census research programme.

“The Census of Marine Life explored new areas and new ecosystems, discovering new species and records of species in new places,” said Patricia Miloslavich, from Venezuela’s Universidad Simón Bolívar, co-senior scientist of the Census and leader of the regional studies.

“Until now most of this information was scattered or unavailable except at a very local level. This brings all known information together for the first time to create a baseline of life in the oceans,” Miloslavich told Tierramérica.

Some 360 scientists reviewed, analysed and presented their findings in a collection of papers published in early August in the open-access online journal PLoS ONE.

Australian and Japanese waters have the highest biodiversity, averaging nearly 33,000 forms of life, the Census found. The Pacific Ocean off China, the Mediterranean Sea and the Gulf of Mexico round out the top five areas most diverse in known species.

The total number of species is unrelated to abundance or biomass of marine species or the productivity in a particular region, Miloslavich was careful to point out. The study only looked at biodiversity, identifying the different types of marine species found in the 25 regions.

The Census discovered that the best-known marine animals, such as whales, sea lions, seals, sea birds, turtles and walruses represent just one to two percent of all species.

Another surprise is that there are many stay-at-home species. These endemic species are only found in a particular region of the ocean, said lead author Mark Costello, of the Leigh Marine Laboratory at the University of Auckland, New Zealand.

The relatively isolated regions of Australia, New Zealand, Antarctica and South Africa have the most endemic species. Scientists speculate that these regions may have suffered fewer extinctions from the climate cooling that occurred thousands of years ago during the last glaciation.

About half of all marine species in the oceans around New Zealand and Antarctica are autochthonous — they can only be found in that region.

The most cosmopolitan species are the smallest and biggest: from algae to seabirds and marine mammals that traverse the oceans throughout their lives. Among fish, the viperfish (Chauliodus sloani) might be the most “social” of all, found in more than one-quarter of the world’s oceans.

Variations amongst the regions are also stunning. Fish represent 28 percent of species in the Tropical West Atlantic and Southeast U.S., but only three percent to six percent for the Arctic, Antarctica, Baltic, and Mediterranean.

The embattled Gulf of Mexico is a biodiversity hotspot, with more than 8,300 species living in the region of the British Petroleum oil spill alone, Miloslavich said.

The Apr. 20 explosion on the Deepwater Horizon oil rig, which BP leased from the Swiss firm Transocean, resulted in the worst oil spill in history. It wasn’t until early August that BP declared the oil well sealed.

Policy-makers should protect the areas facing the greatest threats, said Miloslavich. A full inventory of species in the Gulf of Mexico was completed in 2009 and ignored by U.S. officials.

The BP oil spill has been “very frustrating,” she said. The sad consolation is that the damage done by the oil spill can be measured accurately because there is a solid baseline of what species were there before the spill.

Roughly 230,000 marine species will have been identified when the census count is complete in October, said Costello.

“There are more than one million marine species. What we’ve learned over the past 10 years is what we don’t know about the oceans is at least 10 times what we know at present,” he said.

The most is known about oceans near Australia, China and Europe, while relatively little is known about the Tropical West Atlantic, Tropical East Pacific and Canadian Arctic.

Even in the best-studied regions, like Australia, scientists estimate that they have recorded only about 10 percent of marine life in its Exclusive Economic Zone.

“We must increase our knowledge of unknown biodiversity more quickly, lest much of it is lost without even being discovered,” said Miloslavich.

Costello pointed to a number of recent studies that show many marine species have suffered major declines — in some cases 90-percent losses — due to human activities, and may be heading for extinction.

The main threats to marine life have been overfishing, loss of habitat, invasive species and pollution, the Census has found.

Emerging threats are the enlargement of “dead zones” — areas of the ocean with low oxygen content — and warmer water temperatures and increased acidification due to climate change.

“The sea today is in trouble,” said biologist Nancy Knowlton, of the Smithsonian Institution.

The ocean’s creatures “have no vote in any national or international body, but they are suffering and need to be heard,” she said.