DR CONGO: Sticks And Straw Out of Our Schools

KIKWIT, DR Congo, Aug 3 2010 (IPS) - Led by the local church, residents of Gungu administrative zone, in the southwestern Democratic Republic of Congo have used their own resources to transform the conditions in which their children study. 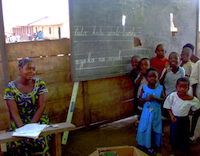 Students and teachers across the DRC often make do with rudimentary facilities. Credit: Lisa Clifford/IRIN

Since 1998, the “Chase sticks and thatch from our schools” has gradually replaced fragile structures across the district, 200 kilometres from Kikwit, capital of the province of Bandundu, with buildings of stone or adobe bricks, roofed with corrugated iron sheets.

The project’s stated aims are to “give human value to often-neglected rural schools, guarantee the security of students and teachers with regards to better conditions for study, to support the Congolese government in its “Cinq Chantiers” programme of which education forms a part.

(The Cinq Chantiers – “Five Building Sites” – programme is a development initiative launched to coincide with the 50th anniversary of Congolese independence, covering infrastructure, health and education, water and electricity, housing, and unemployment.)

Across the south of Bandundu Province, according to the Kikwit diocese’s advisor on primary education, Novele Erasme Selego, “13,500 primary and secondary school students in 54 schools sat for lessons in inhuman conditions: extremely cramped rooms, built with branches and thatch”.

In November 1999, torrential rains collapsed the walls of the Gitshinji primary school, preventing 324 students from attending class until new shelter could be constructed, recalls the school’s director, Aitshi Baudouin. Similar incidents have occurred frequently at other schools in the countryside.

But today, thanks to collective effort, Gungu is experiencing a transformation. At the entrance to the Ngambun Institute, 115 kilometres from Kikwit, stands a striking white-washed block of six classrooms, built of stone. Two hundred sixty boys and girls learn in comfortable surroundings much better than what was here a decade earlier.

“Here we began by getting rid of a thatched roof, replacing it with roofing sheets to protect walls which were constructed two years later, thanks to the community’s efforts,” says a smiling Jean Kasanza, supervisor at the institute. The roof, he clarifies, was made possible thanks to a donation from a group in Spain.

Twenty-three of the 54 schools in the zone have been rebuilt, one in stone, the others in adobe brick.

To upgrade their facilities, the population of Gungu had to become adept at making adobe bricks. Sasa Ngambun, 25, from the village of Mbitshambele explains: “To make a solid, durable brick, one uses red earth from a river bank, mixed with ash in a mould.

“Then add straw chopped into very small pieces with a knife or razor blade, and tip in the chaff left over from brewing local alcoholic drinks. The method is known here as the “gusopa” system in the Pende language, meaning ‘to transform.'”

The brick-making and construction is a male-dominated activity, but women don’t simply watch from the sidelines. Maman Evelyne Kasanji, a 40 year old smallholder at Lukamba, roughly 50 kilometres from Kikwit, says that two or three times each week, a group of mothers, rise early in the morning to transport soil from the river to the workshops for making bricks.

During a ceremony marking ten years of activity on the Gungu project, Mafuta Ntantu Joachin, head of general services with the provincial education ministry, rejoiced in the fact that more than 10,000 children are now studying in acceptable conditions.

“The vision behind this project came before the National Development Programme of the government… The originators of the project didn’t wait for promises, or external assistance before calling on the efforts of local partners for education.”

But Jean Ngulupanda, a small trader from Gungu sees a potential danger. For him, “this will encourage the government to fold its arms. It’s the government which must construct [schools] with the money it has. Otherwise what is the Cinq chantiers programme for?”