KINSHASA, Aug 12 2010 (IPS) - Farmers in the southwestern Democratic Republic of Congo are looking forward to increased production after 16 tractors and 200 ox-drawn carts were distributed across three regions in the province of Bandundu. 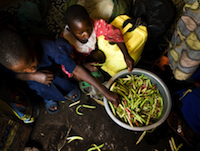 But Kawanda notes, “The population of the province lives in poverty and misery because of low productivity; farmers fields are so small, and their methods of clearing land and working the earth remain traditional.”

The United Nations Development Programme report for 2009 found that three in every four Bandundu farmers lives on less than a dollar a day.

So Italian non-governmental organisation Impreza-Servisi-Coodinati’s (ISCO) provision of agricultural equipment to farmers in the Kwilu district are a welcome development. The region is considered to be the breadbasket for the estimated eight million people living in Kinshasa, the capital of the DRC.

According to Willy Bitwisila, agricultural engineer and ISCO assistant project manager, “Thanks to funding from the European Union in the DRC, we are implementing projects aimed at ensuring sustainable food security and improving Congolese household incomes.

The European Union will contribute nearly 10 million euros to food security projects in the DRC over a period of three years. This funding will help build bridges and maintain agricultural feeder roads in the agricultural region of Bandundu.

The programmes align neatly with the principles of the Comprehensive Africa Agriculture Development Plan. Governments across the continent are designing programmes to boost agricultural output and rural livelihoods with a common strategy focusing on improving land and water management, boosting market access, strengthening food security and supporting agricultural research.

One recipient of a cart, Justice Nzundu, a farmer in the Kahemba subdistrict, told IPS that she was glad that she would now be able to move significant loads of produce to market. Two thirds of what she grows is transported to Kinshasa to be sold.

“I would be able to produce of two tonnes of beans and a tonne of squash per season [every three months], but until now, I have only been able to grow between 130 and 150 kilos in a small 500 square metre plot, only a quarter of which I can only work with my hoe and my machete,” she says.   “The distances are long, and we could only carry small quantities of produce to the market,” says Eugène Finka, another cart recipient. “Because of that, returns were low compared to our basic spending needs and the costs of our children’s education.”   “Until now, we used bikes – when we didn’t have to resort to our backs or our heads – to get our products to market. It goes without saying that our income will now increase with the larger quantities of products that we will bring to market,” said Nzundu.   Henrietta Sulu, a farmer living in Bulungu, who did not receive any of the distributed equipment complains: “I have about 10 hectares but can work on only a 50 by 60 metre area which I planted with cassava, beans and squash. For tilling the soil, all I have is a hoe and a machete which makes for exhausting work. I have constant back pain from being bent over all day long in the field.”

“We can not support all farmers at once because we do not have the means. But what little support we do provide to the public through the provincial government will help ease the hardship of field work and improve access to markets,” said ISCO’s Bitwisila.

George Madola, a student at the University of Bandundu, believes the support will have an immediate and positive impact on agricultural production. “There still has to be a skilled workforce to look after the tractors and ensure that they will be properly used and regularly maintained.”

But Didier Lawela, administrator of the territory of Bulungu is confident: “There is no doubt that rigorous and regular monitoring will be done on the use of such equipment to ensure their sustainability.”

Bokungako Nkaoko, acting commissioner for the district of Kwilu, says there will be consequences for careless use of the new equipment: “It’s good to have these machines, but they have to be used properly if beneficiaries want to avoid the provincial government repossessing them due to misuse .”