MWANZA, Tanzania, Aug 30 2010 (IPS) - Coordinated conservation measures to arrest the steep decline of stocks of Nile perch in Lake Victoria are showing encouraging results – for fish, if not for fishing communities around the lake. 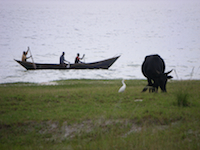 At the end of each day, the boats return to Mwanza, a city on the edge of Lake Victoria, in the northeast of Tanzania. The catch is not what it once was: each boat’s crew quickly sells the 50 or so fish they have landed.

Paul Johaiven is one of the fishermen. Like many of the others, the 25-year-old got no further than primary school. For want of alternatives, he turned to the lake to earn a living.

The Nile perch was introduced to the lake in the 1950s while Tanzania was still a British colony. It proved a catastrophe for other species in the lake, as this aggressive predator – which can grow as long as 2 metres, and weigh up to 200 kilos – fed on native species, pushing hundreds of native species to the edge of extinction.

But the fish have also brought substantial incomes to thousands in fishing communities around the lake.

Around 200,000 tonnes of perch are exported overseas every year, bringing in nearly 250 million dollars a year to the three countries on the lake: Kenya, Uganda and Tanzania.

But the fairy tale is over, says Johaiven. “I spend more and more time on the water, and now i have to fish partly at night. Yet I get less and less fish,” he told IPS.

Geofrey Rubanza says, “Not long ago, we caught lots more fish. Now, we have to go further from the shore, and cast our nets a thousand times and still sometimes we come back with nothing. There are too many people fishing on the lake, and therefore less fish.”

Statistics published by the Lake Victoria Fisheries Organization (LVFO) confirm his observation. Where fishing boats each typically brought in 300 kilos of fish from the lake every day in 2005, in 2008, the average daily catch fell to just 80 kilos in 2008, according to the LVFO.

The average size of the fish caught is also shrinking: from an average of 50 centimetres long before 2007, perch pulled from the lake are typically no longer than 25 cm today.

The FAO estimates that stocks of Nile Perch fell by a startling 80 percent between 1998 and 2008.

But several years of enforcement of conservation policies jointly implemented by the three countries sharing the lake are beginning to show positive results.

Authorities in all three countries have cracked down on excessive fishing and inappropriate fishing methods including the use of net mesh sizes that catch juvenile fish, thus jeopardising reproduction of stocks. Fishing without a licence is also being curtailed.

And following a mid-July meeting in Kampala, further measures will be introduced. For example, fishing crews will soon have to pay rent on the section of the beach that they operate from; the intent is to reduce the total numbers of boats going out onto the water.

The very latest figures released by the LVFO indicate positive results, with a growth in the number of fish. The organisation shows stocks rebounding from a low of 340,000 tonnes in 2008 to 400,000 today.

This is still far from the 750,000 tonnes recorded as recently as 2005, but in light of the steep crash in stocks, the reversal is promising, says John Magufuli, the minister of fisheries for Tanzania.

“Zero tolerance is applied in Kenya and Tanzania against excessive fishing and inappropriate fishing methods, especially the size of the mesh. I am convinced that in the next six months, stocks will continue to grow.”

But as the resource recovers, another problem is on the horizon for the communities whose livelihoods depend on exports of Nile perch: rapidly growing aquaculture of cod in several European countries, which reduces demand for exports of the Lake Victoria fish. The LVFO reports that total exports fell by 40 percent between 1999 and 2009.

Nile perch from East Africa first gained a foothold in European markets due to shortages of cod in the 1990s, but Belgium, the United Kingdom and Norway are all presently enjoying great success in farming cod.

“We too have to become good at aquaculture,” say Wilson Mwanja, the Ugandan commissioner for fisheries. “The stocks of Nile perch are shrinking for lack of good management.”