MEXICO CITY, Aug 20 2010 (IPS) - “The threats change your whole life,” said Jade Ramírez, a journalist who has been living for months with that burden, which also hangs over a growing group of her colleagues in Mexico. 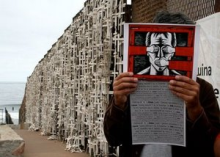 “You adopt safety procedures that you weren’t used to, you know you’re vulnerable, and that’s really hard to accept,” she told IPS. “At first, I really questioned what I was doing, the quality of my work, whether or not I should continue doing it.”

Ramírez, a host on the Guadalajara University Radio station, won the King of Spain International Prize for Journalism in 2009 — along with Priscila Hernández — for a report on discrimination in Colombia’s Avianca airline.

Her life changed abruptly in April, when she was reporting on the resistance mounted by a local community to the construction of the El Zapotillo dam in the west-central state of Jalisco on the Pacific coast, of which Guadalajara is the capital.

The dam is to flood three small towns: Acasico, Palmarejo and Temacapulín.

On Apr. 3, Ramírez and three human rights activists were accosted by armed men who identified themselves as federal government employees, after a local community assembly opposed to the dam.

The harassment was followed by silent phone calls to her home in the middle of the night, emailed death threats, and the constant presence of vehicles with tinted windows outside of her house or following her around.

But no one has been arrested in connection with the threats, even though the armed men were identified and the emails left a trail that investigators would have been able to follow.

In the last 10 months, 64 journalists have been killed in Mexico and 12 more have gone missing, according to the governmental National Human Rights Commission.

The government blames the murders on organised crime and the escalation of drug-related violence triggered by right-wing President Felipe Calderón’s all-out offensive against drug cartels.

But no conclusive investigations have been carried out to demonstrate that the attacks were the work of organised crime.

On the contrary, in its latest report, the Centre for Journalism and Public Ethics (CEPET), which has documented harassment of and attacks on journalists, stated that most of them were the work of municipal, state and central government employees.

In 2009 alone, CEPET counted 140 violations of freedom of speech involving 19 media outlets and 183 reporters, 13 of whom were murdered.

The police or military were involved in one out of three attacks, the organisation reported.

“The profile of the assailants shows a clear tendency pointing to government authorities, above all at the municipal level” in towns outside of the main cities, says the report.

On Aug. 7, dozens of journalists demonstrated in Mexico City, demanding protection and guarantees for the exercise of their profession and an end to the impunity enjoyed by the perpetrators of aggression against reporters.

Similar protests were held in a dozen other cities, including Hermosillo, Ciudad Juárez, Monterrey, Morelia and Coahuila, all of which are plagued by severe drug-related violence.

Referring to the unexpected numbers of people who turned out for the demonstrations, television journalist Ciro Gómez Leyva said the protests were “the first major public action taken by an emerging generation…that is free from the clichés and flaws of previous generations.”

Along with Ernesto Aroche, a colleague from the state of Puebla, Jade Ramírez read aloud, in front of the symbolic column of the Angel of Independence in Mexico City, each one of the names of reporters who have been killed and “disappeared,” in a moving homage.

“The march was very important to me, it gave me a glimmer of hope,” she told IPS. “It’s good to know that I’m not so alone.

“The harassment puts you in a difficult position. Many colleagues stop socialising with you and some friends stop being your friends. I understand it, they’re afraid, but you find yourself on your own, and in the institutions the only thing they tell you is: ‘get used to it’,” she says.

The government has ignored the demonstrations and their demands.

President Calderón has not received the United Nations and Organisation of American States rapporteurs for freedom of expression Frank La Rue and Catalina Botero, who made an extremely unusual joint official visit to the country that will run Aug. 9-24.

On Aug. 13, in a meeting with lawmakers, La Rue said the state’s structural shortcomings in terms of justice and human rights must be recognised. “A weak state cannot protect human rights…Mexico must strengthen its institutions,” he said.

Journalists in the south of the country have also been targets of aggression. On Aug. 13, the offices of the Tinta Fresca newspaper in Tuxtla Gutiérrez, the capital of the state of Chiapas, were raided and robbed.

Two days later, in San Cristóbal de las Casas, another city in Chiapas, the home of Hugo Isaac Robles, who has been a radio news host in the region of Los Altos in that southern state for 30 years, was broken into.

“They didn’t take or touch anything…they just broke in to defecate in the studio,” the journalist said.

Chiapas was one of the states that took part in the Aug. 7 demonstrations, and its governor, Juan Sabines, belongs to the leftwing Party of the Democratic Revolution (PRD).

Isaín Mandujano and Ángeles Mariscal, correspondents with Proceso magazine and the La Jornada newspaper in that state, complained in July about a harassment campaign by the state government, carried out through media outlets aligned with the PRD.

Anonymous emails have also circulated, with their photos, accusing them of manipulating information “to generate the impression that the state government engages in repression of social movements.”

“The aggression occurs in stages,” said Mandujano, who sat on the jury for the National Journalism Prize and is regional coordinator of México Infórmate, a citizen initiative that promotes the application of laws safeguarding access to information.

“First comes the absolute refusal to provide information, and the closure of doors to any event, then a smear campaign, and lastly direct aggression, which is what we want to avoid,” he told IPS. “But that’s not so easy, because they’re putting us in their sights.”