XIADIAN, China, Aug 30 2010 (IPS) - Feng Jun’s fight against a local government and the steel mills he believes polluted the water that killed his daughter has cost him nearly everything. 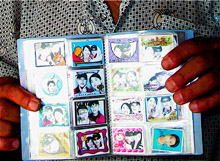 A collage of photos of Chinese teenager Feng Yanan, over whose death from leukaemia her father went to court. Credit: Michael Standaert/IPS

“I hope this tragedy won’t happen to anyone else ever again,” Feng Jun said.

The tragedy for the 44-year-old former farmer, now a landless migrant worker, was the loss of his 16-year-old daughter Feng Yanan to leukaemia on Jun. 19, 2007. His second daughter, Feng Weinan, now 14, was diagnosed with leukaemia at the same time as her sister in early 2006, but recovered through treatment.

To cover the over 600,000 yuan (88,000 U.S. dollars) he spent on his daughters’ medical bills, Feng sold all of his property, his car, his motorbike, his fish ponds, his flock of ducks, his fruit trees, his horses. He cannot get a job in Xiadian here in China’s north-eastern Hebei province because people are afraid of hiring him, he said.

Feng Jun blames the girls’ leukaemia on untreated wastewater discharged from the local steel plants into the Baoqiu River. He says Yanan’s death is the direct result of waste the plants piped into the river just 15 metres away from the land he once owned at Xiadian village, a poor settlement a little under 50 kilometres south-east of Beijing.

He has proof about the high levels of pollution, he says, showing a stack of stamped results of official water quality tests. Tests taken in March 2007 by the a local environmental bureau from his 40-metre deep well showed arsenic levels three times higher than what the government considers safe. Manganese levels were four times higher. Another test of the well in 2006 showed levels nearly the same.

Yet the biggest difficulty for Feng Jun has been proving the link between the cancer his daughters had and the pollution from the plants. While the exact causes of leukaemia are still uncertain, numerous studies have shown that genetic and environmental factors can increase the risks of getting it.

In October 2008, Feng filed a lawsuit against one of the steel plants, claiming it was directly responsible for the death of Yanan and sought compensation to cover her medical costs. The case was finally opened in March 2009, and took over a year to resolve before the Xiadian court ruled earlier this summer that there was not enough evidence to prove a link between Yanan’s leukaemia and pollution from the steel plant.

Testing of the water in Xiadian is regularly done once a year, though these are usually just surface water tests and the steel plant is notified well ahead of time about when the tests will occur, said Feng. None of the surface water tests that Feng has seen have shown abnormal levels of arsenic of manganese, data that the court used to shoot holes in his case.

“Environmental cases like this are difficult in China because these plants are big contributors to local taxes, so officials will do anything to keep those plants operating.” said Li Jian, the lawyer who has been helping Feng with his cases.

Yang Fuqiang, an environmental expert at World Wildlife Fund office in Beijing, said in a recent interview that as many as 40 percent of the cases in some courts in China are environment-related, but that few are getting heard. “The judges don’t know much about the environment or how to handle these cases,” Yang said. “We need to increase the capacity of local courts. We need more environmental lawyers.”

“The steel plants won’t stop working – it’s such a big part of the local economy,” remarked Wang Weihong, Feng’s mother. “The local government thinks Feng Jun is right but they don’t know how to handle it.”

In Xiadian, at least 50 of the 3,300 residents have died of various cancers over the past several years. Privately, people say the number of cancer deaths is closer to 70, and they believe most of the cases can be traced back to the polluted water.

Across China, dozens of similar rural “cancer villages”, where acute pollution has given rise to higher rates of cancer, have sprouted up during the past decade. During this period, heavy industry has increasingly moved out of the larger cities and into the suburbs and rural areas.

Sun, a 61-year-old shopkeeper who did not want to give her full name, said she personally knew about five people who have died of cancer in the past few years in the village. “Liver cancer, stomach cancer, leukaemia,” she said, ticking them off. “The pollution comes from the river. In the summer, the smell is very bad. We can’t drink from the local wells anymore. We had to stop last year. Now we have our water piped in from the next county.”

Zuo, a 24-year-old woman working in a restaurant here, who also did not want to disclose her full name, said pollution had been a problem since she was a little girl, but that it had grown more serious in recent years. Married for a year, she is waiting to save up money to leave the village before having children because the pollution is so bad.

“People who don’t have the money to leave have to stay,” she said. “There are three big steel plants in such a small place. People have just gotten used to the situation. There’s not much hope.”