HURGHADA, Egypt, Aug 9 2010 (IPS) - Six Yemeni fishing boats captured in Egyptian territorial waters in June might have gone unnoticed if not for their unusual cargo — several kilometers of long lines and over 20 tons of dead sharks. 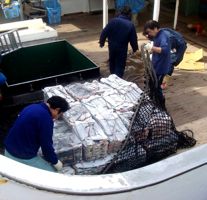 “The capture of these boats provided more evidence that a commercial shark fishery is operating in the Red Sea,” says Amr Ali, managing director of the Hurghada Environmental Protection and Conservation Association (HEPCA), a local environmental NGO. “What’s alarming is to see boats coming all the way from Yemen to fish in our waters. These boats don’t have normal gear for catching fish — they’re only after sharks.”

Shark fishing is big business, with up to 73 million sharks killed each year to feed a global trade that threatens to drive the animals into extinction. Fishermen see little value in the shark’s meat — it’s high in uric acid and almost worthless. But the fins are prized as the main ingredient in shark fin soup, a delicacy in Asia that fetches more than 100 dollars a bowl in Hong Kong.

While the traditional soup has been consumed for centuries, East Asia’s economic success over the past few decades has fueled demand. The number of consumers has risen from a few million in the 1980s to more than 300 million today.

“In the last 25-30 years with wealth growing in China, demand has grown for shark fin soup, and with no limits on the number (of sharks) that can be caught, this has led to a dynamic in which 30 percent of the world’s shark species are threatened,” says Matt Rand, director of Global Shark Conservation for the Pew Environment Group.

According to Rand, sharks are apex predators that play an important role in regulating marine populations. Studies have shown, for instance, a correlation between declining shark populations and the increasing frequency of jellyfish swarms.

Commercial fishermen catch sharks accidentally while fishing for other species, or deliberately use lines several kilometres long and set with thousands of baited hooks. To save space on their boats, fishermen usually cut all the fins off the live shark and throw the animal back into the sea to die. The fins are then dried or frozen and shipped to East Asian markets.

“Without its fins, the shark is left to either suffocate or bleed to death,” says Elizabeth Wilson, a marine scientist and fisheries campaign manager for Washington-based Oceana. “It is similar to the ivory trade in that the animals are targeted for a single body part that is sold at very high prices on the international market…and this trade is decimating wildlife populations.”

The slow reproductive cycle of sharks makes them particularly sensitive to over-fishing.

“Sharks don’t have the biological potential for commercial extraction,” Rand told IPS. “They’re not like other fish populations that lay thousands of eggs and reproduce very quickly. Sharks reproduce very slowly and only have a few pups.”

Over-fishing has decimated shark populations in the Mediterranean Sea, where the 47 known species are threatened. A study published in 2008 in the Journal of Conservation Biology showed that the Mediterranean Sea’s population of five large sharks has plummeted over 97 percent in the last two centuries. Some species, like Hammerheads, have been wiped out almost entirely.

As shark populations crash, commercial fishermen are moving into new areas to exploit stocks. In recent years finning operations have targeted the Red Sea, home to one of the world’s last remaining healthy shark populations.

“Our local fishermen were never interested in sharks — nobody likes the meat, it’s bulky and sells for very cheap,” explains HEPCA’s Ali. “About a decade ago the Chinese started showing up here. They taught our fishermen that they could get good money by selling the fins, and they didn’t have to bring the whole animal back — they could just cut off the fins and put the rest back in the water.”

An Egyptian ban on shark fishing in force since 2005 has reduced the number of local shark fishermen, but in recent months an increasing number of foreign poachers have been spotted in Egypt’s Red Sea waters.

“Our shark protection laws have given sharks in the Egyptian Red Sea a chance to reproduce safely, but it has also made us a target for every shark fisherman in the region,” says Ali.

While Egypt prohibits shark fishing within 20 kilometers of its coastline, there is no limit on the number of sharks that can be caught elsewhere in the Red Sea. Dive boat captains report that long-line shark fishing is “out of control” off the coast of Sudan and Eritrea.

The Indian Ocean Tuna Commission (IOTC), an inter-governmental organisation that manages Red Sea waters, has ruled that shark fins must not account for more than five percent of the weight of the sharks on board. The measure, though difficult to enforce, aims at slowing shark depopulation and ending the practice of finning.

“If you have to maintain the whole body it discourages to some level catching sharks,” Rand explains. “This may slow the decimation of sharks, but it certainly does not stop shark fishing.”

The only real hope for that, say conservationists, is to reduce the demand for shark fin soup. They note that fur coats were once fashionable, but are now widely seen as a vulgar display of bad taste. A similar shift in public perception could foment international distaste for shark fin soup.

“We’re trying to educate consumers on where shark fin soup comes from, and…that shark populations are in trouble,” says Wilson. “The messages seem to be sticking, especially with the younger generations, but it’s definitely going to take a whole lot of effort.”