NAIROBI , Sep 3 2010 (IPS) - Despite a bumper harvest of maize just a few months ago, many residents in the eastern part of Kenya are facing hunger and starvation. While granaries in the region may be full, the grain cannot be freely sold, let alone eaten. 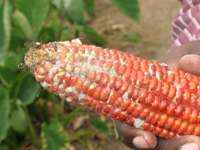 Aflatoxins are toxic, carcinogenic by-products of fungi that colonise maize and groundnuts, among other crops. Credit: Isaiah Esipisu/IPS

“It is said to be contaminated. Government experts have warned us that it has aflatoxins,” said Judith Mwende from Mutomo village, in Kitui district east Kenya.

Aflatoxins, locally known in the region as ‘mbuka’, have affected nearly all the residents of Kenya’s Eastern Province. Aflatoxins are toxic, carcinogenic by-products of fungi that colonise maize and groundnuts, among other crops. It is poisonous to humans and animals.

With tears rolling down her cheeks, Mwende recalls how she lost her mother and daughter six years ago. They were just two of the 123 residents in the area who died after they consumed aflatoxin-contaminated maize in 2004.

“When we harvested it, we thought it was food. Little did we know it was poison. And now here it comes again. We planted maize for food, yet what we have is poisonous stuff in our granaries,” said the middle-aged mother of three, who is among several other seasonal farmers in the area. Mwende only plants crops when the rains come, and in this area rainfall has been elusive, after three years of drought it only rained in this region in 2009.

The plight of Mwende and other farmers like her is the reason why one woman has decided to try and find a way to combat the fungal contamination.

Dr. Sheila Okoth, a Kenyan research scientist, is in the process of finding a sustainable solution to fungal contamination and mycotoxin production in foods, including aflatoxins. She leads an interdisciplinary and farmer participatory project on Conservation and Sustainable Management of Belowground Biodiversity (CSM-BGBD).

“We are assessing all the avenues for a locally acceptable and effective method of controlling the contamination,” said Okoth.

Her quest to find a solution for fungal contaminations comes after research findings revealed that African countries do not have cost-effective technologies that can be used to reduce the risk of human and animal exposure to aflatoxin contamination.

The International Food Policy Research Institute (IFPRI) has also launched a research project to find cost-effective methods of handling aflatoxin contaminations. According to Dr. Clare Narrod, a senior research fellow at the institute, there is no systematic data collection on the extent of chronic exposure or prevalence in the various crops that humans may be consuming in Africa.

However, she notes that the Centre for Disease Control has estimated that more than 4.5 billion people in developing countries are chronically exposed to aflatoxins in their diets. Narrod added that there are methods and tests available for reducing the risk of aflatoxin poisoning and are in practice in many developed countries, though many of them are not affordable to the poor in developing countries.

“There are a number of biological studies on control options that may be more affordable to the poor, but most of them are experimental and thus there hasn’t been large scale adoption,” said Narrod.

The CSM-BGBD project has to date come up with biological control methods (fungus that prey on fungi that cause plant diseases) to combat the Fusarium sp fungus which causes food poisoning.

“I have to develop bio-control methods that would be more cost effective and sustainable especially in Kenya,” said Okoth, who is currently attached at the University of Stellenbosch in South Africa on a fellowship sponsored by the African Women in Agricultural Research and Development program.

In collaboration with the university’s Department of Plant Pathology Okoth is studying possibilities of developing aflatoxin-resistant maize lines. “I am determined to be part of the solution to a problem that makes poor farmers even poorer,” she said.

Aflatoxin contamination is a common problem all over the world. But since its accumulation is highly dependent on the prevailing weather conditions, the burden in Africa has been enhanced by climate change. This year’s aflatoxin contaminated harvest in Kenya came following the 2009/2010 flooding which severely affected the region after a three-year drought.

“We cannot afford to run away from such challenges. We have to (tackle) them head-on,” said Okoth.

Together with South African experts, Okoth is in the process of identifying fungi that can prey on aflatoxins. If it works, it will be used as a bio-control method for the poisonous fungi. “We are making good progress. And in five weeks time, we hope to start trials of the bio-control method in Kenya,” she said.

She also hopes to come up with post harvest techniques ideal to local farmers. “The most important thing to do is to accurately identify the fungi, and factors leading to toxigenic strain dominance. After this, the next step is to develop management procedures” said Okoth.

So far, according to Dr Bandyopadhyay, Ranajit, a research scientist at the International Institute of Tropical Agriculture, Kenya is the only country in Africa where people have died due to aflatoxin poisoning. While contaminated maize is being destroyed by government, not everyone wants to see their grain destroyed.

In Kwamonga village in Mwala, Kenya, Eunice Mutinda is still fumbling with her produce. She does not want to sell it off to the government’s Cereal and Produce Board at a drastically reduced price.

Government offered to purchase all the contaminated maize harvested from the region at less than half the market price, in order to destroy it. But it is something Mutinda does not want to do. So instead, she has mobilised 38 female farmers to store their produce in a common cereal bank.

“We have heard of aflatoxin contamination in cereals found within our province. But we cannot afford to lose our produce before it is properly analysed. Not after enduring a long starvation period,” said Mutinda referring to the three-year drought that proceeded the 2009/2010 flooding.

(*The version of this story published on Aug. 18, 2010 incorrectly reported that Mali and Kenya are most affected by aflatoxin poisoning and that Felicia Wu said little is known about how to reduce the risk. Aflatoxin is a widespread problem worldwide, especially in the developing world. Further, there are numerous technologies available to combat the problem.

Wu was also incorrectly identified as an IFPRI researcher. While she collaborates with IFPRI, she is in fact an assistant professor at the University of Pittsburgh who has published extensively on reducing aflatoxin risk. IPS regrets the errors.)