PORT OF SPAIN, Trinidad, Sep 28 2010 (IPS) - With a recent study warning that the Caribbean could lose six percent of its Gross Domestic Product annually to the ravages of climate change, some experts say that a combination of adaptation funding and risk pooling is the region’s best hope for the future. 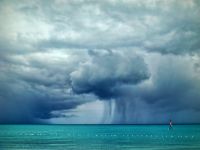 High winds cause up to 90 percent of storm damage in the Caribbean. Credit: maistora/creative commons license

“As the regional impacts of climate change become more apparent in the future – with expectations of an increase in extremes in weather patterns such as drought, extreme rainfall events and an increase in greater magnitude hurricanes – climate insurance will become even more critical in addressing the enhanced risks associated with these changes,” he said.

The Caymans-based CCRIF is owned and operated by 16 Caribbean governments, and is the world’s first and, to date, only regional fund to provide earthquake and hurricane coverage in the form of a set payment when disaster strikes. A similar model is currently under discussion by Pacific Island states, Pearson said.

It found that annual expected losses from wind, storm surge and inland flooding already amount to up to six percent of GDP in some countries and that, in a worst case scenario, losses could reach as high as nine percent, with wind the single largest damage contributor.

This is equivalent to the impact of a serious economic recession – one that never ends, the study said.

Expected losses from climate risks varied significantly across the pilot countries, ranging from one percent of GDP in Antigua and Barbuda to six percent in Jamaica. The differences were driven by various factors including topography and exposure to coastal hazards, the economic importance of particularly vulnerable sectors, and location.

Among the hazards considered, hurricane-induced wind damage has the largest damage potential, accounting for up to 90 percent of the overall damage, with coastal flooding and storm surge most threatening in low-lying countries, the study found.

CCRIF said that the findings, which were released in late August, provide a sound economic fact base that countries can use to design their national climate adaptation and disaster management strategies.

Pearson said that the data can also help delegations prepare for the Nov. 29-Dec. 10 Climate Change Conference in Cancun, Mexico, where Caribbean and other small island developing states will be seeking financial aid to carry out mitigation and adaption plans.

“The current economic climate is one in which Caribbean governments already find themselves facing serious constraints with little fiscal space for climate adaptation financing,” Pearson told IPS. “Given these limited resources, countries will need to be especially proactive in sourcing financing for adaptation at the regional and international level, and also within both the public and private sectors.”

Edwin Carrington, the secretary general of the Caribbean Community (CARICOM) grouping, calls CCRIF’s research “of immense value to Caribbean policymakers and the business sector in their efforts to develop and implement sound adaptation strategies and plans”.

He noted that the “unequivocal” warming of the global climate reported by the Intergovernmental Panel on Climate Change has already affected the Caribbean, with temperatures increasing by about one degree C. during the last century and seas rising two to three millimetres per year since 1980.

CARICOM countries “need lasting adaptation strategies that can help to provide security for the livelihood for our citizens and protection against an ever changing climate”, Carrington stressed last month.

Under the accord reached in Copenhagen last December, rich countries promised $30 billion in “fast start” financing – money to assist developing nations to cope with climate change that was supposed to be made rapidly available.

Research by Project Catalyst of the ClimateWorks Foundation and the European Climate Foundation suggests that the demand for money to support mitigation, adaptation and reduced degradation of forests in the developing world will be $21-54 billion over the next three years. An additional $100-190 billion in private sector investment will have to be found each year.

While competition for these funds is high, the CCRIF report says risk mitigation initiatives have the potential to cost- effectively avert up to 90 percent of the expected losses in 2030, even under a severe climate change scenario.

“I have always called this short-term financing the golden key to Cancun,” Christiana Figueres, head of the U.N. Climate Change Secretariat, told a news conference earlier this month to launch FastStartFinance.org, a website that tracks climate change funding commitments from industrialised countries.

“It is particularly urgent and important to have clarity about the source, the allocation and the disbursement of the short-term funds,” she said.

The research by CCRIF, Pearson told IPS, can assist countries in not only understanding the risks they face and how to adapt to these risks, but also making a case in Cancun and other ongoing discussions with the wider international community on financing adaptation.

He added that besides insurance pools, there have been developments aimed at making insurance instruments available at the sectoral level such as India’s National Agricultural Insurance Scheme, which covers more than 20 million farmers, and the Weather-based Crop Insurance Scheme, covering more than 600,000 farmers, which protect against poor harvests caused by drought or frost.

Similar initiatives are ongoing in Malawi, Thailand and Central America, with CCRIF also involved in the exploration of how similar mechanisms can be developed for the Caribbean’s agricultural sector.