GADAB ASSASSA, Ethiopia , Sep 17 2010 (IPS) - Like most farmers in Ethiopia, Jundi Hajji expected that the profit from his wheat harvest would be sufficient to feed his family of eight until next year’s harvest. 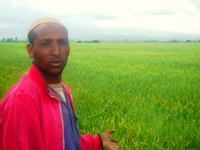 Jundi Hajji is concerned how his family will survive if the yellow wheat rust claims his entire harvest. Credit: Omer Redi/IPS

But, following a yellow wheat rust epidemic across the country and on his farm, he is concerned how his family will survive if the rust claims his entire harvest. (Yellow wheat rust stunts and weakens the plant and can sometimes kill an entire field of wheat.)

Hajji has a five hectare wheat farm in Qawa village of Gadab Assassa, a rural district at the heart of wheat-producing central Ethiopia. He is one of the millions of farmers whose plantations are seriously affected by yellow wheat rust. Hajji used to harvest up to six tonnes of wheat per hectare in previous years. “This time, I’m afraid we are going to end up with no harvest,” Hajji told IPS.

The yellow wheat rust epidemic has reached all wheat-growing areas of Ethiopia, covering over two million hectares land, and will lead to an over 50 percent harvest loss unless farms get sprayed with chemicals in a matter of weeks, said Solomon Gelalcha, Director of Qulumsa Agricultural Research Centre, one of the organisations under the Ethiopian Institute of Agricultural Research.

But the outbreak comes at a time when Ethiopia has just developed two new wheat varieties that researchers say are durable against any wheat disease. Unfortunately the new varieties are not available for public use as yet. The varieties, which are yet to be officially named, are resistant to multiple current and possible future wheat killer pathogens of yellow, stem and leave wheat rusts, researchers say.

The varieties were developed by researchers at Qulumsa through a new approach called Durable Rust Resistance in Wheat, said Gelalcha. The latest approach focuses more on giving the new wheat varieties durability against any wheat disease. The previous model gave varieties “vertical resistance” to a single disease, and is easily defeated by new diseases or when the disease they are resistant to evolves.

“Due to the natural gene-for-gene reaction (from the pathogen to the host/the wheat variety) the resistance comes to an end when the photogene evolves or mutates,” Gelalcha said. “But the new horizontal resistance approach gives the wheat multiple genes that complement each other in the face of different pathogens.”

The cumulative or additive effect in the “horizontal resistance” will take diseases much longer time to defeat the wheat, if at all they do. By that time the wheat will be ready for harvest, Gelalcha said. The varieties have proven to be resistant to yellow, stem and leave rusts when tested at the research centre’s farms. However, the new varieties are yet to be approved by the agriculture ministry’s Seed Approval Committee before it can finally reach farmers. The approval and the subsequent propagation and multiplication processes normally take years.

But the country’s farmers cannot wait that long. “The state of the wheat harvest in Ethiopia this year is not good at all,” Gelalcha, told IPS. “Due to the early onset of the rainy season months ahead, rust spores (yellow wheat rust-causing particles) have been accumulated in almost every wheat-growing area.”

Most of these areas lie in the mid and high altitude parts of the country making them highly vulnerable to yellow rust. While Gelalcha estimates over 50 percent harvest loss unless chemicals are sprayed urgently, other pathologists fear the loss could be as high as 90 percent.

So far, government has sprayed a few private and all state-owned farms. Most farmers have to pay to have their farms treated. In an attempt to save his wheat, Hajji has paid 150 dollars to have 2.5 litres chemicals sprayed twice on his farm. But he is not sure whether this will save his crop. He will see the results in October, when the crop reaches maturity.

Most farmers cannot afford the chemicals. And if they can, chemical supplies have been meager, farmers complain. But, Dr. Abera Derressa, Deputy Minister of Agriculture, told IPS that the government has just imported over 1.2 million dollars worth of chemicals that arrived on Sep. 13. “There will be a minor loss but now that the chemicals are available we will save most of our harvest,” Derressa said.

Meanwhile, Qulumsa is attempting to release the new varieties of wheat before officially having them approved. They are hoping that by 2011 at least five percent of farmers will have access to the new wheat.

“But we are now following a different approach. As opposed to a quintal (about 100kgs) in the past, we now provided the state and private seed propagators with 18 to 28 tonnes that we developed through irrigated farming. Similarly, they are expected to multiply and provide farmers with these varieties at a faster rate and speed than in the past,” Gelalcha told IPS.