MEXICO CITY, Sep 7 2010 (IPS) - Faced with the voracious international demand for lobsters from the Mexican Pacific and Atlantic, fishers and environmental organisations have come together to institute sustainable lobstering practices — although the financial benefits are slow in coming. 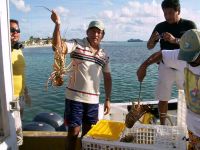 Fishers in Quintana Roo with their lobster catch. Credit: Courtesy of Equator Initiative

The California spiny lobster (Panulirus interruptus) is a specialty of northwestern Mexican cuisine, along the Pacific coast. Fried or boiled, with tortillas, rice and beans, or any number of preparations. But mostly it is exported, to the extent that the species has reached critical depletion.

“We had been caring for the lobster population for years, but we regulated ourselves. We have reason to maintain the product with some measures we have adopted and others that have been recommended,” Jesús Camacho, of the Regional Federation of Fishing Industry Cooperatives (FEDECOOP), explained to Tierramérica.

Based in Ensenada, a coastal city about 75 kilometres from the U.S. border, FEDECOOP is carrying out a sustainable fishing project on the Baja California Peninsula, with the support of the non-governmental group Community and Biodiversity.

After a three-year process, in 2004 FEDECOOP obtained the sustainable fishing certification from the international Marine Stewardship Council, created in 1997 by the Worldwide Fund for Nature (WWF) and the British- Dutch transnational Unilever, one of the world’s largest fish processors.

The MSC blue eco-label, which is granted for five years, covers the entire process, and is issued after monitoring the status of the lobster populations, the degree to which their exploitation affects the ecosystem, and the enactment of a strict management system that ensures its survival over the long term.

Lobster fishing generally utilises artisanal techniques at depths less than 20 metres. Females reproduce once a year, and the adults head to shallow waters in the boreal spring, returning to deeper waters in the autumn.

The FEDECOOP fishers use techniques they have developed themselves, involving a special wire and a cage to catch the lobsters, with a window that allows the smaller ones to escape.

There are at least 592 boats and 1,212 lobster fishers in the area, with some 30,000 traps. They collect about 1,350 tonnes of spiny lobster during the five-month fishing season. The seafood fetches about 31 dollars per kilo.

“The blue label gives us the political recognition we didn’t have before. But so far we haven’t had the incentive for a better price for environmentally healthy products,” complained Camacho.

The association is made up of 13 cooperatives and some 1,500 fishers from the area. In May 2009 the re-evaluation began for renewing the certification, with the hope of concluding the process this year. FEDECOOP is also involved in fishing for abalone, a prized mollusc, as well as conch and several fish species.

MSC became independent in 1999, with its main offices in London. The organisation grants the ecological label to sustainable fishing operations. So far there are 94, including one in Argentina, with another 118 under evaluation, with one in Chile.

Two other Mexican fishing projects — tuna and sardines — are under evaluation by MSC in Baja California.

Ninety percent of the live lobster captured by FEDECOOP is destined for the United States, France or China, the last being the hungriest lobster market, and one that does not require sustainable production for its lobster imports.

Europe, meanwhile, wants frozen lobster, which could add value to the product, but currently is beyond the capabilities of Mexico’s Pacific coast fishers.

On Mexico’s east coast, on the Yucatán Peninsula, the non-governmental organisation Razonatura and six groups from the Federation of Fishing Cooperatives of Quintana Roo are planning to launch a collective trademark Chakay Langosta Arrecife Sano (Chakay Lobster Healthy Reef).

The project revolves around the evaluation of the Caribbean lobster (Panulirus argus) in the nature reserves of Banco Chinchorro and Sian Ka’an, in the state of Quintana Roo, and the possibility of generating added value with “designation of origin” status and fomenting direct connections between fishers and consumers. The annual capture is about 180 tonnes of lobster.

The Chakay project began in 2004 as part of the government’s Programme for Collective Biological Resources. In addition to the cooperatives, comprising 300 marine fishing families, the National Commission for Protected Natural Areas is participating.

In Quintana Roo, lobster fishing is done with special snares, avoiding females with eggs, and fishers do not dive or use scuba equipment, due to the many work accidents resulting from complications related to decompression.

The status of the lobster is critical along Mexico’s Atlantic and Pacific coasts due to the high demand, which drives up prices — and income for the fishers. As a result, Mexico and the Central American countries have imposed bans on lobster fishing during the reproductive season.

However, sustainable lobstering is not impossible, as long as it is based on scientific evidence, states a 2003 study of the California spiny lobster by Armando Vega, of the regional fishing research centre, under the National Fishing Institute.

“There has to be a coordinated effort involving the government, the industry, scientists and the social sector,” said biologist Ley.

In Vega’s view, the main challenge is to optimise fishing using a cost-benefit analysis and integrating the species biology and ecology with economic and social factors.