WINDHOEK, Sep 7 2010 (IPS) - A changing climate will prompt changes in behaviour across Southern Africa. And when it comes to adaptation, Swazi farmer Bongani Phakathi is a frustrated man a few steps ahead of his neighbours. 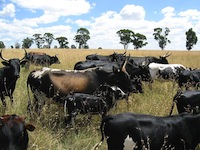 Traditionally, livestock in Swaziland grazes in the fields during winter, eating what’s left behind after maize and other crops are harvested. But Phakathi practices conservation agriculture on his smallholding a few kilometres outside the capital Mbabane.

“I don’t allow cattle to graze in my field because livestock degrades the soil – not only by eating all the maize stalks and leaving the soil bare, but also by stamping on the ground,” Phakathi told IPS.

For his own cows, Phakathi cuts some of the maize and grass and sets it aside. But the rest he turns into mulch to help preserve both moisture and soil fertility on his plot.

His neighbours are nonplussed to find his field full of tempting fodder fenced off, and don’t hesitate to let their cattle in to graze there.

“I’m always on the lookout for them so that they don’t enter my field,” Phakathi said.

The field system of grazing in Swaziland is quite problematic, according to Dr Roland Dlamini, the director of veterinary services at the Swazi Ministry of Agriculture. He confirms Phakathi’s view that letting the cattle into the fields not only damages the soil, and adds that the livestock also overgrazes, eating up all available forage in a short time.

Ulf-Dieter Voigts manages an 8,500-hectare farm, Krumhuk, some 25 kilometres outside the Namibian capital, Windhoek, keeping over 600 cattle, and 1,000 head of game animals.

"It only rains for about three months in a year in Windhoek and that means for nine months you have no grass growing and you have to manage what you have effectively for the livestock to eat," said Voigts.

Krumhuk produces dairy, beef and game meat. The farm has European Union-certification as organic and the livestock feed only on grass. It is divided into grazing camps where groups of livestock feed for short periods.

"We monitor the grazing of the livestock so that there is no overgrazing," said Voigts. "We rotate the cattle after every week."

Just as important, despite having 8,500 hectares to range over, the farm limits the number of cattle to around 600.

"We sell our cattle for beef, not only as a way of making money but to keep the herd to a manageable size," said Voigts.

The problem of wild fires destroying grass also affects Krumhuk, but Voigts explained that the problem has been overcome this problem through the involvement of the whole community living the farm.

"We have about 70 people working in this farm and they own 20 percent of the cattle in this farm," said Voigts. "This therefore means that the people here will not be careless with fire and if there is a fire incident, everyone comes running."


“We’re now telling farmers to make hay and feed their livestock systematically so that they have enough food to last them for a longer period,” said Dlamini.

“Those in the lowveld where they haven’t had good rains for over ten years now are used to making hay because they don’t have maize fields.”

One challenge for those who have taken up the practice of making hay comes from bush fires, which burn the grass that farmers are supposed to make hay for their livesotck with.

“This is a serious problem in the country – people are still burning the bush the way they please,” said Dlamini. “Besides that, wild fires end up destroying houses and fields, they also mean there is no grass for the livestock.”

Dlamini said there is a need for a clear land use policy if issues of grazing are to be addressed, because precious pasture is being lost to housing. “Right now we’re running out of grazing land because people are building houses in areas previously reserved for livestock.”

There are models of how to manage rangeland in dry conditions from elsewhere in the region, such as Namibia. The best examples there carefully control the total number of cattle, and move the herds around to avoid degrading soil or exhausting available grass.

But Zimbabwean agricultural advisor Dr Tobias Takavarasha said it is important to acknowledge that different grazing systems across the region are a reflection of different conditions.

He pointed out that Namibian ranchers typically have far more space to sustainably practice grass-only grazing, for example, and that Swazi herds are not guided by strictly business concerns – farmers are reluctant to sell animals that represent status rather than commercial capital.

But he said there are methods suited to every situation.

“Where there is not enough grass, a farmer can feed the livestock on organic maize and beans,” said Takavarasha.

Bongani Phakathi hopes the message gets through to his neighbours soon, for the good of not just his fenced-off plot, but for everyone.