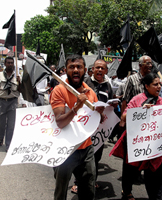 Protesters show their disapproval of the amendment giving extended powers to the President. Credit: Anupama Ganegoda/IPS

Or so say political observers who have denounced the absence of a strong opposition, which has made it much easier for the Rajapaksa administration to get the amendment – one that strengthens his grip on power – passed in Parliament. The lifting of the term limits was supported even by some members of the main opposition group, the United National Party (UNP).

“We saw during the recent passing of the constitutional amendment that the opposition did not even have the power to challenge the government,” said Soosaipillai Keethaponkalan, head of the political department at the University of Colombo. “We have in fact gone to an informal one-party system.”

The UNP boycotted Parliament on the day the bill was debated and voted on Sep. 8 – a move that was ignored by some of its own members.

The ratification of the 18th Amendment to Sri Lanka’s Constitution, by a thumping majority of 144 votes in a 225-member Parliament, lifted the two-term limit on the executive presidency in this South Asian island nation. Now, President Rajapaksa is free to run for a third, and even a fourth, time if he so wishes.

“The UNP leader (Ranil Wickremasinghe) is waiting till the President finds himself in trouble – he feels that power will just fall onto his lap,” Terrence Purrasinghe of the University of Sri Jayawardenapura in Colombo, wrote in a column over the weekend.

“There is a huge vacuum here (lack of a strong opposition) – the need for a mature political movement to fill this is evident more than ever,” he added.

But Keethaponkalan pointed out, “Unless the economy tanks, I don’t think his (Rajapaksa’s) popularity will fall.”

Jehan Perera of the National Peace Council warns that the absence of a strong opposition is a recipe for disaster. “Unwise decisions can be made when there are no checks and balances,” he said.

He adds, however, that the opposition can still revitalise itself. “Sri Lanka is a plural society and there is nothing preventing a strong opposition being created at any future election.”

But first Wickremasinghe must hurdle an internal challenge to his party leadership. Twenty-five UNP legislators have reportedly threatened to sit as independents if Wickremasinghe does not act on reforms such as allowing younger members more say in party decisions.

The controversial amendment came less than five years after Rajapaksa’s first victory in the polls and just months after his resounding triumph in the presidential vote in January.

The widely popular president is credited with leading the government to the May 2009 victory against the separatist Tamil Tigers after almost 30 years of war.

The amendment also abolished the Constitutional Council – an independent advisory body – and grants the president the power to appoint members to key commissions, thus lifting any restraints on an already powerful executive presidency.

“We are convinced that the changes embodied in the Bill are entirely inconsistent with constitutionalism and liberal democratic values, and adversely affect the sovereignty of the people and the republican principle,” the Centre for Policy Alternatives (CPA) said in a statement.

Supporters of the amendment argue that contrary to perceptions that it has eroded checks on the executive presidency, it has even strengthened them, because it makes it compulsory for the president to appear in Parliament every three months.

“The President’s accountability to Parliament would be further strengthened,” Minister Basil Rajapaksa told Parliament during the debate on the amendment. The constitution states, however, that Parliament cannot overrule any decision taken by the president, apart from a two-thirds majority vote.

Members of the governing coalition maintain that the enhanced accountability under the amendment can only be good for Sri Lanka.

“A two-term President presenting himself at a third presidential ballot will have to convince the people that he is a deserving candidate among all the other candidates,” Minister Mahinda Samarasinghe said in Parliament on Sep. 8.

“The people will have a wider choice as to who they want to lead the country. The people, ultimately, will decide upon their preferred choice. This is the pith and substance of democracy,” he added.

The administration was accused of railroading the bill and disregarding public discussion and scrutiny. But the Supreme Court, in a ruling issued a day before the Sep. 8 vote on the amendment, said that it needed only a two-thirds majority in Parliament and did not have to be put to a national referendum.

The CPA statement maintained, however, that “the procedure for urgent bills has been engaged, and the conclusion is inescapable that this is to foreclose, or at least attenuate, legitimate public discussion, critique and debate of the substance of the proposed changes.”