COLOMBO, Sep 1 2010 (IPS) - Ramaih Sathdiyapillai has had enough of life on the run. A native of Kilinochchi district – which was until not too long ago the stronghold of the separatist Tamil Tigers in Sri Lanka’s north – she bore the brunt of the war along with tens of thousands of others. 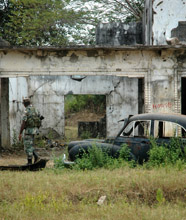 Funds are needed to ensure that post-war reconstruction efforts in Sri Lanka continue. Credit: A Alles/IPS

As the war between government troops and the Tiger rebels escalated between mid-2008 and mid-2009, civilians like Sathdiyapillai found themselves trapped by the fighting. She escaped the conflict in March 2009, spent almost one and half years in a camp for the displaced and only returned to her native Kilinochchi in August.

Still, she cannot return to where her house is in Ponnagar, because the area has yet to be cleared of mines. “So we wait, till we get the all clear,” she says. For the time being, Sathdiyapillai lives in a tent. She says it is much better than running away from bombs and bullets, or living in a camp for the displaced. “At least we have some kind of privacy now.”

Her dream is to build a new house for her family, now that the almost three-decade-old war in this South Asian island nation is over. “This is like the end of a very bad, very long nightmare, to have a house and be sure that we don’t have to run away from it,” Sathdiyapillai said.

The United Nations has estimated that there is a need for at least 160,000 new houses in the Vanni, the region that was dominated by the Tigers until they were wiped out by government forces in May 2009.

According to U.N. estimates, about 3,200 houses have been built in the Vanni by mid-July while an additional 2,100 were in various stages of construction. Housing is the biggest need in the region – especially now that number of those displaced by war and staying in various camps has fallen below 30,000 as of August.

More than 280,000 people have left the camps, like Sathdiyapillai has. Close to 200,000 have reached their villages or live on their own, while the remainder lives with host families.

The returnees have been promised a grant of 325,000 Sri Lankan rupees (about 2,900 U.S. dollars) to build houses. “We are waiting for that,” Sathdiyapillai said. This amount, according to the U.N. core group on housing construction, is enough to build a 46.45-square metre house over a period of at least six months.

But there could be delays in the reconstruction process, due to factors such as lack of assistance funds from the international community after the end of the war. The United Nations faces a funding gap of 165 million U.S. dollars in its targeted contributions for Sri Lanka this year. So far, it has received more than 120 million dollars for its post-war programmes. “There are shortfalls for all sectors, but the largest are for work on economic recovery and infrastructure, water and sanitation, agriculture and health,” said the U.N. donor appeal released on Aug. 26.

There remains much to be done in the Vanni, U.N. officials say. “The job is not yet done. It is still a critical period and we ask for your continued support to meet the remaining crucial needs,” Neil Buhne, the U.N. country head for Sri Lanka, said in an appeal to donors to stay the course.

Indeed, the list of needs is long. According to U.N. records, at least 96,000 toilets need repair, and over 60,000 have to be reconstructed. There is a need for 61,000 new wells. Roads and transport need major attention, especially in remote areas of the Vanni.

At the same time, sectors like education and health have recorded improvements. More than 240 schools have reopened and were functioning by end of July in the Vanni.

More than 25,000 households have also received assistance to restart farming in the Vanni. U.N. officials say they hope to see this number double soon and more than 60,702 hectares of farmland back in cultivation before the end of 2010.

Still, the success of many of these projects rests heavily on funds continuing to come in during the period of rehabilitation, long after the sounds of war have died down.

“All of us know there is much more to be done. Recently returned people are still vulnerable,” Buhne pointed out.

The United Nations has scaled down some of its operations in Sri Lanka, although officials say this is because the work has been completed. In the last nine months, it has closed the offices of the Coordination of Humanitarian Affairs (OCHA) and the U.N. High Commissioner for Refugees (UNHCR) in the country’s east.

Still, hearing news like these tends to make people like Sathdiyapillai worry. “We have suffered so much, for so long. At least now we have the chance the pick up the pieces and live in peace” if reconstruction efforts continue in the coming years, she said.