RIO BRANCO, Brazil, Oct 22 2010 (IPS) - Acre, the small Brazilian state that is a symbol of the struggle to preserve the Amazon rainforest, is facing the challenge of ensuring that the development ushered in by two paved roads that will link the state to both the Atlantic and the Pacific oceans will be sustainable. 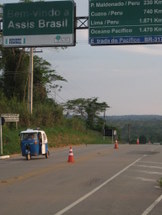 The paving of highway BR-364, which cuts across the northern part of the state, will be completed in 2011. The project, which includes the construction of five large bridges, will make possible a future connection to the central region of Peru.

Similar road infrastructure projects in Peru will provide rapid access to ports in the south of that country, along the roads that connect with BR-317, the highway that is already paved in eastern Acre, which ends at Brazil’s border with Bolivia and Peru.

This small northwestern state, which is the farthest removed from the Atlantic ocean that bathes Brazil’s long shoreline, is now seen as the country’s gateway to the Pacific, which is reorienting its development.

All exports to Asia from the west-central state of Mato Grosso, Brazil’s biggest soy producer, and from the northwestern agricultural state of Rondonia will be transported to the Pacific by land, predicted Carlos Bantel, a forestry engineer and specialist in the natural resources of the jungle.

The new route would save between 2,000 and 4,000 km in travel to carry goods to either the Panama canal to the north or the Strait of Magellan at the southern tip of South America, on the way to the Pacific ocean.

A route to the Pacific is a long-cherished dream for Brazil. And there are now even more pressing reasons to achieve it, as China has become the biggest importer of products from Brazil, South American integration forges ahead, and western Brazil has become an agricultural powerhouse.

The state of Acre, which is home to just 700,000 of Brazil’s 192 million people and produces very little, will play a central role in this transformation. But it will experience a major impact in the process.

Disproportionate wealth will begin to circulate in this state that is not self-sufficient in food and that produced exports of just 21 million dollars in 2008.

A full 88 percent of the state’s original forest cover has been preserved, according to government figures, because “this is the end of the line” when it comes to Brazil’s economic expansion, said Missias Lopes, an official at the Brazilian government’s environment institute, IBAMA.

Most of the population of the state is made up of descendants of migrants from Brazil’s impoverished Northeast, who were drawn here to work as rubber tappers or “seringueiros”, mainly in the early 20th century and, later, during World War II.

During the war, the government mobilised young people to provide the Allied troops with natural latex from the Amazon jungle, due to Japan’s blockade of rubber from Asia.

The settlers were not allowed to produce anything but rubber, which led to “the loss of the culture of farming, as in the case of my father, one of the ‘rubber soldiers’ from the Northeast,” said Lopes, who specialises in economic history.

Acre then turned to cattle ranching in the 1970s and 1980s which, along with the construction of roads, led to the deforestation of vast tracts of land. But the resistance put up by the seringueiros and environmentalists curbed that process and brought about a revival of the extraction of rubber, he explained.

As a result of that movement, “extractive reserves” were created — areas of public land aimed at reconciling biodiversity conservation with the sustainable use of natural resources — under the leadership of activist Chico Mendes, the hero of rubber tappers, forest dwellers and environmentalists, who was murdered in 1988.

Another leader to emerge from that struggle was Marina Silva, the Green Party presidential candidate who took 19 percent of the vote in the Oct. 3 first round of elections, making an Oct. 31 runoff between the two leading candidates — the governing Workers Party’s Dilma Rousseff and the opposition’s José Serra — necessary.

The outgoing and incoming governors of Acre announced that the state would not be a mere transport route for the exports of outsiders, but that it would be moving towards the industrialisation of its own raw materials, like lumber and beef, for export as well.

But the expected flood of investment has environmentalists worried. Paved roads in the jungle are “the worst environmental predator,” said Bantel, a professor at the Federal Institute of Education, Science and Technology in Acre.

In Acre, the logging industry does not always live up to the law, because the low prices on the market do not compensate the additional costs involved in complying with environmental regulations, he said.

The Acre state government’s forestry office, however, says 95 percent of lumber produced by the state is the product of sustainable management, and that the deforestation of the past is no longer occurring.

Exports will stimulate cattle raising, in a state where there were 2.45 million head of cattle in 2006, three times the total of 10 years earlier and equivalent to four head of cattle per person.

That is reflected by the monotonous grasslands all along highways BR-314 and BR-317, where it becomes clear that livestock are the main cause of deforestation of the Amazon.

The network of paved roads will be important for Acre’s integration with Peru and for the state’s internal integration. Once it is fully paved, BR-364 will see constant traffic between towns and cities that have been isolated and cut off for eight months of the year by the rains that make the muddy roads impassable.

Zenildo de Freitas does not depend on roads, but travels three hours along the Purús and Iaco rivers to sell his squash and fruit in Sena Madureira, 150 km from Rio Branco. The trip takes too long for him to sell perishable vegetables. He estimates that 80 percent of what is sold on the local market “is brought in by river.”

The precarious nature of supplies, especially in the rainy season, is an argument in favour of paved roads and integration with Peru, an excellent market for beef from Acre.

But on the other side of the border, there is an idea that the new road connections “will only benefit Brazil, which is keen to reach the Pacific without having to go through Panama” and which as an industrial power “wants to monopolise everything,” in the words of Grimaldo Taboada, who ran unsuccessfully for mayor in the town of Iñapari, Peru.

The town is the starting-point of Peru’s section of the Southern Interoceanic Highway, and Brazilian companies are building several stretches of the road in that country, which would seem to corroborate the view expressed by Taboada, of the opposition Nationalist Party of Peru.

“Brazil is highly protectionist,” said his daughter, Maritza Taboada, who criticised Brazil’s tariff and non-tariff barriers like health and technical requirements that keep out typical Peruvian products from the border region of Madre de Dios, like the goods she is trying to export.

But on the tourism front, both father and daughter acknowledge that Peru will benefit, because the highway will increase the influx of Brazilians to places like Cuzco and Machu Pichu.

The paved roads will give a boost to business in Iñapari and “will maybe make the government pay more attention to us,” said Baldina Coila, a shopkeeper and former schoolteacher from Peru.

“Many children of Iñapari study in Brazilian schools” in the city of Assis Brasil across the Acre river, because they are free “and here you have to pay a registration fee and monthly school fees,” she said.