CHINA: Revisiting History Is In, But With Much Caution

BEIJING, Oct 17 2010 (IPS) - The headlines of the day’s newspapers strike passersby as being strangely out of sync with today’s events: ‘China’s quick deployment in the war with India astonishes the world’. Or ‘Corruption dealt with the bullet by Mao Zedong’, and ‘The true reason why Stalin repeatedly postponed Mao Zedong’s visit to the USSR’. 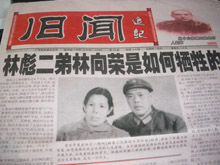 Fastened with pegs to a string across the kiosk, there for everyone to peruse, these newspapers are among at least half a dozen ‘old news’ papers for sale.

They are a hot commodity among both young and old, says the kiosk girl. The editions look old, the paper feels old but the content is a novelty in China, where historical narrative is fossilised and the truth about many events is censored.

The publication of such papers is just one facet of China’s new fad with revisiting history, says Yang Jisheng, a journalist and writer who recently published a book on one of China’s best kept historical mysteries – the man-made famine during the 1958-1961 ‘Great Leap Forward’.

“Many things in our recent history have been covered up. What we do know is actually a kind of twisted truth,” he said. “People who witnessed those events and read the papers at the time want to know what actually happened. Young people want to read things that are not available in their history books.”

‘Old News’ newspaper, for instance, carries items that run the gamut from the politically important to the curiously piquant.

Along with articles that tear the veil of secrecy off relations between late top communist leaders, there are gossip columns about Mao Zedong’s insistence on being served live carp during his 1957 visit to Moscow and a full-page feature about the extraordinary measures taken to keep secret the age of Chiang Kai-shek’s wife, Song Meiling.

Unlike the stiff jargon used by the Communist Party’s flagship newspaper, ‘The People’s Daily’, the narrative in the ‘old news’ publications is fictionalised. The venerated communist leaders of the past are made to appear approachable, almost like the neighbours next door.

Is this a jab at the current communist leadership’s aloofness and continuous secrecy?

“People are hungry for the truth about their leaders both in the past and now, but we cannot write such stories about current leaders,” said Yang. He humorously describes himself as a reporter who has gone from reporting the ‘new news’ for the state-run Xinhua news agency to writing the ‘old news’. He now edits the magazine ‘Yanhuang Chunqiu’, which chronicles Communist Party history through the personal accounts of its veterans.

But while the veil of secrecy on many past issues may have been partially lifted, there are limits to the topics that can be probed.

Some tragic events in China’s recent history that the Party worries about are not to be found in any of the ‘old news’ papers. The most glaring omission is the massacre of unarmed civilians during the Jun. 4, 1989 crackdown on pro- democracy demonstrations.

Likewise, no articles probe into the true reasons for the Great Famine, which going by different accounts killed between 30 and 45 million people. Other omissions include the Communist Party’s internal struggles that led to the violent political campaigns of the 1950s and the Cultural Revolution.

Instead, the choice topics of ‘old news’ publications include current events.

At the height of China’s row with Japan over the Diaoyu/Senkaku islands, the papers ran stories about the two countries’ historical disputes.

With Beijing increasingly assertive about its claims in the South China Sea, some of the papers are tracing back the history of China and Vietnam relations. The text of a 1958 declaration by the Vietnamese government allegedly recognising China’s claims over the disputed territorial waters is prominent in the 79th edition of ‘Old News’. “It is great to have the big picture of history and understand a bit why things happened this way and not differently,” said Xie Yan, who regularly buys the periodicals. Asked if he believes that they carry the whole truth about history, he smiled whimsically: “It is the one that does not contradict the government’s view of history.”

Still, writers and independent filmmakers are increasingly pushing the boundaries of what is deemed permissible for historical study by the Communist Party.

Yang Jisheng’s book on the famine, ‘Tombstone’, arguably the first systematic account by a Chinese author of the mass starvation that Mao’s collectivisation policies caused, was published in Hong Kong in 2008. Banned in mainland China, thousands of copies have been smuggled in, and pirated copies exist too.

Feng Xiaogang, an epitome of commercial success in China’s film scene, has produced a film about the country’s most disastrous earthquake, the 7.8 Richter-scale temblor that flattened the entire Tangshan city in 1976, killing at least 300,000.

‘Aftershock’ is a rarity not only because it deals with an event that casts unflattering light on the Communist Party’s response to the disaster, but also because the truth about what went on in Tangshan at the time was kept secret from the outside world for many years after.

As the survivors in Tangshan used their bare hands to dig through the rubble of their homes, stacking the corpses of their loved ones in the streets, the Party refused all international aid and told its citizens to rely on themselves.

Lu Chuan, a director who made 2009 shocker film ‘City of Life and Death’ about the horrors of the 1937 Nanjing Massacre, claims that many Chinese intellectuals are now ignoring the party’s taboos and looking into the reasons for the Tiananmen massacre. “Many, many people in China quietly and systematically research June 4th, as well as the Cultural Revolution, and collect historical documents to preserve the memory of those events,” Lu said after a screening of his film in Beijing.