LONDON, Oct 19 2010 (IPS) - China’s rebel artist Ai Weiwei had intended a political message. And may be a truly memorable metaphor for the state of modern China and humanity as a whole. But the final outcome of his multimedia installation at the London’s Tate Modern may have been rather unexpected, for what he got was a striking symbol of the ‘Made in China’ effect on the world. 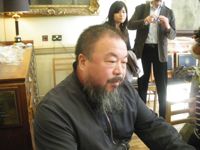 Ai’s mega-offering of 100 million handcrafted sunflower seeds covering the Tate Modern’s vast lower floor has been fenced off and “quarantined” from the public just two days after the public opening – for health and safety concerns. The danger of inhaling the dust from the China-made porcelain seeds has been deemed too great to allow visitors to walk, trudge and play on the thick grey carpet.

“This is an interactive piece of work and to ban people from doing it defeats its purpose,” said Claire Reed, standing frustrated behind the barrier. “You are supposed to be making your own design from the seeds, walk on them, touch and feel them. That is why I came here.”

John Chen, an art student from Hong Kong, was even more perplexed. “These seeds were hand-made by 1,600 peasant girls in China. If it was not poisonous for them then why is it harmful to us?”

Russian-born Irish artist Varvara Shavrova who used to live and work in Beijing had a different take on it: “In China one can get away with murder but things here in the UK are different. Pollution is definitely out.”

After its opening last week the art installation resembling a shingle beach had drawn huge crowds moving and scampering through it. Ai Weiwei is best known in the West for conceiving the steel latticework body of Beijing’s Olympic Stadium, nicknamed the “bird’s nest”, and for his later disillusionment with the whole Beijing Olympic project as a piece of state propaganda.

Deceptively simple and minimalist, this work of Ai bears similarity to the famous Zen gardens of Kyoto. It is perfectly still and somewhat eerie. The grey rectangle, though, comes alive when you start walking on it. The 100 million small porcelain sunflowers seeds crunch and move, resistant to pressure and rubbing, and indeed release fine particles of dust.

The irony of the signs put up by Tate telling people to keep off the art is felt even more after one watches the film accompanying the installation work. In it 53-year-old bearded Ai Wewei is seen as the inadvertent benefactor of an army of artisans after arriving in Jindezhen, the old imperial porcelain centre of China, and mobilising the town folk to work on his project.

“I tried to explain to (the workers) what we wanted them for, but they found it very difficult to understand,” he said. “Everything they usually make is practical.” The painters would be usually working on creating classically beautiful flowers or Chinese landscape designs for porcelain vases. But sunflower seeds?

In the process each porcelain seed was moulded, fired, and painted with three or four individual brush strokes. Women would often take the objects home to work on them. They were paid higher than the normal wage, and after finishing the work they asked Ai if he had another project in store for them.

The pollution effect of the ‘Made in China’ phenomenon may have been unintended but the installation work does give an arresting glimpse of modern China — the vastness of its people, manufacturing power and long artistic traditions. And in a twist, what seems a featureless sea of grey pebbles is ultimately made up of millions of individually handcrafted pieces.

The art also works on many different levels. It is a project dedicated not to the sun but to the sunflower seeds. During the years of the Cultural Revolution when Ai Weiwei was growing up, China’s supreme leader Mao Zedong was likened to the sun and the masses were pictured as his children — the sunflowers gazing at his face with adoration.

For millions during the years of the devastating Great Leap Forward famine (1958-61) sunflower seeds were also the only food available. Ai calls them a keepsake of communist times.

In a sense the work is also a counterpoint to an almost canonical image from China — the vast terracotta army commissioned by the country’s first emperor and most famous tyrant, Qin Shihuang, where thousands of identical looking ancient soldiers were all individually crafted.

In an ironic twist, visitors to the unearthed pits of Qin’s tombs in Xian, the old imperial capital, can only gaze at the terracotta soldiers from behind a barrier too.

Asked if he is upset with the fencing of his art at the Tate, Ai Weiwei smiles: “No interaction is also a kind of interaction.”