NAIROBI, Oct 19 2010 (IPS) - Seventeen years ago it seemed like an impossible dream to provide thousands of low-income farmers with a way to borrow small amounts of money. But people working in the tea sector in the rural areas of central Kenya were determined to address farmers’ lack of access to credit. They started the Muramati Savings and Credit Cooperative Society. 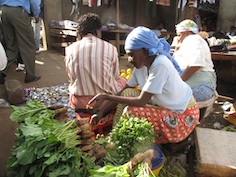 Sistre Muthoni displays her farm produce at a market in Nairobi, Kenya. Many farmers in Kenya use credit services cooperatives. Credit: Suleiman Mbatiah/IPS

According to Joseph Ngaai, who is the chairperson of Muramati, a group of tea factory directors, tea board members and officials working with small- scale farmers noticed the difficulties the farmers had in accessing banking services. The Muramati Savings and Credit Cooperative (SACCO) Society was started by pooling resources to create a financial base for small-scale farmers.

Most of Kenya’s population live in rural areas. Many are small-scale farmers battling with poor infrastructures, illiteracy, risky economic ventures and low profitability. SACCOs have grown in prominence in Kenya, filling the gap left by risk-averse banks.

SACCOs are democratic organisations owned, managed and governed by members. Money is pooled and members agree to make it available to each other at reasonable interest rates.

“We wanted to offer lending services to farmers at minimal costs. We had no office to operate from but we used mobile cash points from where farmers were paid their money,” Ngaai explains. The vernacular word “muramati” symbolises stewardship, confidence, care and being “someone else’s keeper”.

A far cry from its humble beginnings in office space “borrowed” from someone, a capital base of 500 dollars and almost no staff, Muramati SACCO Society has managed to recruit over 70,000 members, mostly farmers, and is now moving into urban centres.

The east African country’s government has prioritised quasi-banking institutions in its ambitious plan called “Kenya Vision 2030”. The government regards such institutions as a tool to achieving the United Nations’ millennium development goals.

Lawrence Munyua from Murang’a District in central Kenya believes his success as a farmer hinged on Muramati’s support. He joined the society in 2008: “Muramati helped us out when most farmers in central Kenya were frustrated with poor payments in the tea sector. Hundreds had uprooted their stems for other food crops that they thought could work as substitutes,” Munyua told IPS.

With the society’s support, farmers diversified their farming methods. Many moved into dairy production and bought goats and cows. “Muramati at the same time educated farmers on basic savings methods”, says Munyua.

Munyua explains that farmers sometimes need credit quickly and that SACCOs are able to process applications fast. It should be noted, however, that new Muramati members can access only small loans in the first six months after joining.

Munyua enthuses that, “I managed to educate all my children; and to buy a piece of land and a vehicle with the loans”.

Tea farmer Mary Wangeci confirms that SACCOs transform poor people’s lives. “They listen to you when you present your problems to them,” she told IPS on the phone from her farm in Thika in central Kenya.

SACCOs are Kenya’s fastest growing financial services. According to the minister of cooperatives, Joseph Nyagah, they presently account for savings of about 2.2 billion dollars, which represents 32 percent of national savings.

Previously, many SACCOs in Kenya had collapsed due to financial mismanagement of funds and poor decision-making.

The Kenyan government passed a law in 2008 to ensure prudent financial services management at SACCOs. Earlier in 2010, the government put in place the SACCO regulatory authority. The 2008 act empowers this body to license and regulate operations of deposit-taking cooperative groups.

Tony Mwangi, Muramati managing director, told IPS that SACCOs have gained their market share despite stiff competition from existing financial institutions. “The financial position of SACCOs is on the ‘up’. They are able to lend an average of 12.3 million dollars annually to their members,” says Mwangi.

SACCOs are extending their range of services as mobile phone banking takes off. Muramati plans to give members basic education on using information and communication technologies, including using automated teller machines and banking on the internet and per short messages using mobile phones.