LATIN AMERICA: Women Peacekeepers Have a Vital Role to Play

SANTIAGO, Oct 20 2010 (IPS) - In June 2009, Chilean army captain Andrea Fuentes travelled to the city of Cap-Haïtien, in north Haiti, to serve for six months in her country’s contingent in the United Nations Stabilisation Mission in Haiti (MINUSTAH). 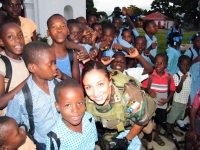 Chilean Captain Fuentes with children at a school in Haiti. Credit: Courtesy of Chilean Army

She was the first female Chilean officer in the Civil-Military Coordination Unit, which works directly with the people of Haiti, the poorest country of the Americas. For Fuentes, a single 30-year old woman, a gender perspective has always been a priority in her work.

Before being deployed she received training to implement a United Nations resolution on gender in peacekeeping operations. Resolution 1325 was adopted by the U.N. Security Council a decade ago to reaffirm the important role that women play in the prevention and resolution of conflicts and in peace-building, and to promote the equal participation and full involvement of women in such efforts and the need to mainstream a gender perspective into peacekeeping operations.

Through this resolution, the Security Council called on U.N. member states to ensure the representation of women at decision-making levels in conflict resolution and peace processes, expand the role and contribution of women in these efforts at all levels and incorporate a gender perspective into peacekeeping operations, while taking special measures to protect women and girls from gender-based violence and address their special needs.

Along with two non-commissioned officers under her command, Fuentes was in charge of various tasks, including coordinating the construction of separate bathroom facilities for boys and girls in schools, and organising baking courses to support Haitian women’s incorporation to the labour market.

Fuentes says the contribution that women soldiers can make “is not the same” as that of men: “It’s not better or worse; we just have a different sensitivity, which allows us to reach people better.”

MINUSTAH was established after the 2004 coup d’etat that overthrew President Bertrand Aristide. Its original mandate was to restore a secure and stable environment, foster the political process, strengthen Haiti’s tovernment institutions and rule-of-law-structures, and promote and protect human rights.

This mandate was later renewed several times and expanded to guarantee continued support to a weak national government and provide relief in natural disasters, the most devastating of which was the Jan. 12 earthquake that killed 220,000 people and left millions more without a home.

Although ten Latin American countries contribute troops to MINUSTAH, some with a large number of soldiers, only two of them — Argentina and Chile — have plans to implement Resolution 1325.

Of the countries in the region, Uruguay, Argentina and Chile have the largest number of women in their troops. But even in their case, women are very far behind men both in numbers and in decision-making power.

The inclusion of female troops depends on several factors, Pamela Villalobos, equal opportunity advisor for Chile’s Defence Ministry, told TerraViva. Recruitment is done on a voluntary basis, and in order to qualify, women must meet a profile established by the United Nations and then pass the required tests.

In August 2009, Chile became the first country in the Americas to approve a national action plan to implement Resolution 1325, as required by the Security Council. Only Canada has followed suit. Although Argentina has also adopted one, it is limited to defence matters. Only 22 countries in the world have implemented such action plans.

Concrete progress has been made, Villalobos said, with the incorporation of issues such as special protection for women and girls in the training curricula of military academies. Another development is the production of gender statistics, which help make women visible in these missions.

Uruguay’s military press officer, major Jesús Aires, said he was unaware if his country’s troops received any training in gender equality issues. “The mission is not focused on gender issues,” said another military source who asked to remain anonymous. The troops in these peace missions run the risk of turning into occupation armies, or of turning a blind eye to situations that are damaging to women. In November 2007, MINUSTAH sent home all of Sri Lanka’s troops when charges of sexual abuse and exploitation were brought against some one hundred of its members.

Reports of sexual violence in the country became more common after the January earthquake, when hundreds of thousands of people were forced to settle in overcrowded makeshift camps.

In mid year, the Security Council decided to deploy an exclusively female police contingency of 600 members to these camps, and a unit of 110 Bangladeshi police women arrived in June.

The Latin American security forces, however, cannot match these numbers, because the participation of women is recent and scarce.

“If the number of women increases, we’ll be able to be more alert” to gender issues, said Fuentes, who is planning to apply in 2011 to the Bosnia-Herzegovina peace mission.