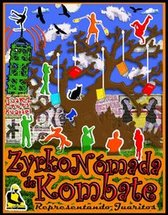 Two months ago, the same scene was repeated every evening in the park of the Hidalgo neighbourhood, in the centre of this city bordering the United States. Many of the houses there are uninhabited, but this itinerant group, which aims to regain public spaces, took up the task of cleaning and painting some of the empty buildings.

“Nearly everyone in Juárez has lost someone, and faced with that, the only thing left is to get rid of fear,” said Susan Medina, a 25-year-old nicknamed Oveja Negra (Black Sheep). She is a member of the hip-hop quartet Batallones Femeninos and of Zyrko Nómada de Kombate (Zyrko Nomad of Combat), a collective of street artists.

In April, at a conference about addictions and youth, Medina had words for Margarita Zavala, wife of Mexico’s conservative President Felipe Calderón: “We feel abandoned. I’ve seen my friends die, my brothers, and they say they are wasted bullets. And then we are accused of being gang members,” she said.

“For (the politicians), Juárez is a city of business, not a community where human beings live. They have always seen us as merchandise, and there is no concern for the people,” she told IPS recently.

“They come here to work, to produce, to get by; not to live or think. We are pieces of cheap labour. For the young people, the only option is to work in the ‘maquila’ factories. There are no universities or places for culture,” Medina added.

Ciudad Juárez is considered the most violent city in Latin America and one of the most violent in the world. In just the first 10 months of this year, there were more than 2,300 murders, for an average of eight per day in this city of 1.2 million people.

Decades ago, the city turned into a paradise for “maquilas” or “maquiladoras,” subsidised and tax-exempt assembly plants of products for export — a system that also benefitted from Mexico’s low wages.

Since 1993, when assassinations of women began and Juárez became world news for the “femicides” which now number more than 1,000, the brutal deaths have had a link to the maquilas, where many of the victims worked.

Verónica Corchado, spokesperson for the Pact for Culture, an organisation that since 2005 has worked to strengthen the social fabric through culture, underscored the sad reality of this city: there are only four theatres, but there are 321 maquilas.

“Juárez has been an experiment for the federal government in many ways. But it has also been a laboratory of neoliberalism,” filmmaker Ángel Estrada told IPS.

“For years we have seen how the family and community structures have broken down, and how the voracity for economic development has cast aside culture and education,” he said.

Situated 1,842 kilometres north of Mexico City, Juárez is at the centre of the Calderón government’s strategy against organised crime — primarily drug trafficking cartels. Some 8,000 soldiers and 5,000 agents have been sent to Juárez in the last three years.

Faced with the spiral of violence they say was triggered by that strategy, citizens of Juárez are taking a stand to stop the bloodshed.

There is a growing current of hip-hop, rap and rock groups emerging as a critical response to the violence. Their songs lighten up the many funerals, they can be heard everywhere in the streets and are flooding social networks on the Internet.

“It is the cry of the ‘chavos’ (young people) of Ciudad Juárez,” said Erik Ponce, member of the band Mera Clase. “There is no culture being offered, no options for young people, so they are creating their own spaces and the ‘rolas’ (songs) are speaking out against the system,” he said.

“It’s a different way of throwing stones. You make those protests, but through music, through painting. It is a way of getting rid of the pain, it’s therapeutic, individually or collectively,” said the young musician.

Side by side with the music movement, which began to develop in 2009, are civil society organisations and segments of the population caught in the crossfire between the criminal groups and the federal government.

On Oct. 16, an association of children’s groups presented the “Listen to Me, Play with Me” project, to give continuity to a campaign which during the July municipal elections forced all the candidates to sign a commitment to take concrete steps to help the children of Juárez.

This second phase, which began in a park in the populous neighbourhood of Toribio Quiroga, in the city’s southwest, aims to recover public spaces for use by families.

“If the city’s most remote communities are going to recover their public spaces, people must feel ownership of the streets and the places where their children can play,” campaign member Josefina Martínez told IPS.

Days earlier, President Calderón was in the city to relaunch the programme “Todos Somos Juárez” (We Are All Juárez), a social reconstruction programme that the government improvised after the massacre in Villa Salvaracar, the neighbourhood where 16 adolescents were killed during a party on Jan. 31.

The programme failed and Calderón was received with protests staged by students and by journalists, who called for justice in the recent murder at a shopping centre of Juan Carlos Santiago, 21, a photographer with the Diario de Juárez newspaper.

The citizen protests in Juárez are beginning to flow into one another. On Friday, Oct. 22, it was the doctors who organised a march and a work stoppage by the health sector to demand an effective response to the violence, which continues on the rise.