PUNO, Peru, Oct 8 2010 (IPS) - In southeastern Peru, a message is circulating that has left some dubious, and others hopeful: “The Inambari hydroelectric dam will end illegal mining and coca crops, and bring development and jobs.” 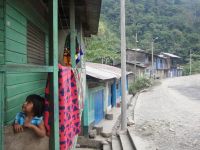 The village of Puente Inambari is at the centre of the mega-dam debate. Credit: Milagros Salazar/IPS

It is a polarised scenario. Some of the residents from the Puno region are planning a march to protest against the hydroelectric dam to be built in their community with Brazilian investment.

“They lie to us. We don’t want to lose our jungle,” said Olga Cutipa, president of the Río Inambari Organisations Front.

Like a broad segment of the residents of Carabaya province, in Puno, the activist opposes the Inambari project, which calls for a reservoir covering 37,800 hectares, according to the initial version of the feasibility study. The projected budget is 5 billion dollars, for an installed generation capacity of 2,200 megawatts.

The dam would flood a portion of the Peruvian Amazon jungle here, and extend into the regions of Cuzco and Madre de Dios. The Inambari dam would be the largest in Peru, and one of the biggest in Latin America.

Cutipa told IPS that on Sunday, Oct. 10, some 2,000 people are heading to Juliaca, capital of San Román province, also in Puno. From there, they will march to Lima — planning to arrive two days later.

“The Inambari River is our bank. We take gold from it to raise our children,” she said. “Why would we want to leave?”

Approximately 70 towns and villages would be displaced by the reservoir, according to a study by engineer Rosario Linares, for the group Civil Society for the Construction of the Puno Trans-Oceanic Highway.

A representative from the Southern Amazon Electrical Generation Company (EGASUR), which operates with Brazilian capital, told IPS that the number is smaller, but did not give an exact total.

The dam is one of five projected in an agreement signed by the governments of Brazil and Peru on Jun. 16 to generate 6,000 megawatts.

The company is trying to conduct a census of the population to be relocated, and has asked Lima to extend its concession to June 2011, while giving away school supplies and school uniforms to children in the area.

EGASUR is proposing 10 zones for relocation, but the residents fear that their new homes will not be built near the Trans-Oceanic highway for which they have fought so many years.

The company assured they would indeed have highway access and will guarantee the provision of basic services — but EGASUR would not give IPS a detailed plan despite repeated requests for the information.

Meanwhile, along with the sentiments supporting and opposing the megaproject, uncertainty hovers over the small farms, forests and rivers of the region.

“I wanted to expand to two hectares of cocoa beans, but they say that President Alan García already signed a pact with Brazil, that we’re already done for. What do I do? Plant the crop or not?” wondered Sebastián Chu, 59, a farmer in Puerto Manoa, one of the first Puno towns that would be relocated.

Chu grows a half-hectare of coca as a source of cash to grow other crops, he told IPS. Coca leaf has traditional religious and medical uses in Peru, but is also the raw material for cocaine.

For one 10-kilo package of coca, farmers are paid 120 soles (43 dollars) on average, while a kilogram of cocoa bean fetches just six soles (less than two dollars), and 100 mandarin oranges brings in three soles.

“Strangers used to come to buy from us, but after the coca eradication programmes (led by the government in 2004 and 2005), coca really declined,” said the farmer.

The view from EGASUR: “It is not just a problem of the reservoir, but of the entire Inambari watershed. It’s the growing pressure from migration and the presence of illegal activities: industrial-scale mining and coca maceration (initial processing to produce cocaine),” states an e-mail IPS received from the company.

Some government officials have supported that version.

Visiting the site of the future reservoir, one can see gold mining along some stretches of the Inambari River, ranging from the most rudimentary techniques to the use of heavy machinery.

But what dominate the landscape are the virgin forests — not the coca fields, unlike the adjoining province of Sandia, also part of the Puno region.

In Sandia, where there is no direct route to the area of the hydroelectric project, some farmers lay their coca leaves in the middle of the highway to dry. The coca even grows near the town squares, as in Masiapo, capital of the Alto (Upper) Inambari district.

In the provincial capital, meanwhile, what stands out is the construction of hotels and housing — buildings as tall as five storeys, which is unusual for this area. Police and public prosecutors confirmed to IPS the existence of drug trafficking there.

On the other side, in Carabaya, fear is growing because most of the residents do not hold the titles to their homes.

“Will they pay us? Will they recognise us as owners of our farms?” asked Evelyn Medina, of Loromayo, a town torn by a dispute between the Carabaya districts of San Gabán and Ayapata. And also claimed by a neighbouring region: Madre de Dios. The land claims all begin to overlap.

Some young people see the dam as a chance to earn money in the short term. Carlos Lima, 22, is building lodgings in Loromayo in order to make the most of the four years needed to complete the dam construction. “This is just for now, I don’t want to stay here. I want to live in a city,” he told IPS.

For Ernesto Ráez, director of the Environmental Sustainability Centre at Cayetano Heredia University, the town relocations will only shift the social problems to another “10 points of contamination.”

“This is not a solution, and that is why we should ask ourselves who benefits from the project,” said Ráez. The environmental costs are high: not only will the course of the Inambari River be affected, but also the entire surrounding ecosystem.

Furthermore, the hydroelectric project will encroach on part of the buffer zone of the Bahuaja Sonene National park.

Environmental organisations argue that the mega-dam will mostly benefit Brazil, because Peru has to turn over a set amount of energy for 30 years, without increasing its own portion even if domestic demand increases.

EGASUR, meanwhile, says it will respect national and international standards for the relocations.

The director of support and protection for the displaced, under the Ministry of Women and Social Development, Elmer Galván, said the company must draft a relocation plan in consultation with the residents and establish compensation amounts. “Furthermore, it has to offer options that are better than their current situation — and that is not a favour, it’s an obligation,” he told IPS.

Peruvian law does not require the consultation of local residents in order to expand the concession, but public workshops are requested as part of the environmental impact study process to obtain final permission. The company has made some steps in that process, but with little success.

Brazil has stricter national requirements for mitigating the negative environmental and social impacts of megaprojects, and public prosecutors can even order a halt to construction. Brazilian social movements also have more spaces in which to exert pressure. That bar seems to be much lower in Peru.