FREETOWN, Oct 16 2010 (IPS) - Marie Musa, 37, is devastated. After the mother of four gave premature birth, her baby boy died a few hours later – because the hospital did not have enough incubators to rescue the infant. 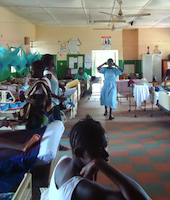 Musa, a fishmonger who lives in the slum community of Susan’s Bay, east of Sierra Leone’s capital Freetown, complains bitterly about the severe lack of resources at Princess Christian Maternity Hospital, Freetown’s main public health facility: “Nobody could do anything to help my baby”.

Aminata Sesay, one of the hospital’s nursing sisters, explains the staff did everything they in their power, but without an incubator, there was nothing they could do save the infant. “It needed to be placed inside an incubator, and there was none available,” she says, shrugging her shoulders.

The hospital has only three incubators, and all of them were already occupied on that day. The facility needs at least ten incubators to meet the demand, the nurse reckons.

In August, the same month that Musa’s baby died in hospital, James Bamie Davies, commissioner of the customs and excise department of Sierra Leone’s National Revenue Authority (NRA), announced in a government gazette an auction of medical appliances, including eight incubators.

According to the commissioner, the incubators were a private donation to the health ministry by a Sierra Leonean emigrant who works as a nursing manager at Emory University in Atlanta, Georgia, in the United States. But after their arrival, the health ministry had failed to clear them from the quay.

NRA public information officer John Baimba Sesay told IPS the incubators were put up for auction in accordance with the Customs Act, which states that if goods are not cleared by customs within 30 days, they have to be auctioned.

Only the public outcry that followed the announcement of the auction in the gazette, did the Ministry of Health and Sanitation spring into action and recover the goods.

Dr Samuel Kargbo, director of the reproductive and child health programme of the Ministry of Health and Sanitation, admits that the unavailability of equipment and infrastructure as well as the extensive bureaucracy within his department has hampered health care provision throughout the country.

It has also partially counter-acted the benefits of the free public health care services for children under the age of five as well as pregnant and lactating women, which government launched on 27 April in an attempt to reduce high child mortality rates in the country.

One in five children die before they reach the age of five in Sierra Leone, and one in eight women die during childbirth, according to the 2008 United Nations Human Development Index.

In the five months since the introduction of the new services, public health facilities have experienced critical challenges in implementing the new policy, as they lack skilled health personnel, particularly gynaecologists and nurses, notes Kargbo, adding that many hospitals throughout the country don’t have running water, electricity and generators.

According the national Ministry of Health, Sierra Leone, which as a population of 5.7 million, has only eight obstetrician-gynaecologists employed in the public health system and about the same number working in the private health sector.

There have also been serious allegations by civil society organisations that some patients are asked to pay for those services, even though they are free of charge.

Aminata Sesay told IPS that, to improve their salaries, some health workers try to extort money from women in labour who don’t have a choice but to pay if they want to be assisted.

Nurses’ salaries have been increased substantially by government after a countrywide strike action in May – from $35 a month to $130 a month – but health workers say this is still not enough for them to survive and to justify the long hours they are expected to work.

The cost for a bag of rice is about $30 and, considering the high cost of living and to settle utility bills, I think we need $500 a month,” Sesay complains.

Despite his vocal criticism of the public health system, Kargbo highlights the fact that Sierra Leone is still trying to recover from its twelve-year civil war, which only ended in 2003. “It is a gradual process, and we have started to see a few successes in the five months after the free health care started,” he notes.

“We have noted an increase in the utilisation of health facilities by over 80 percent, whilst it was at 30 percent before the free health care policy was introduced,” Kargbo further explains, saying that only ten percent of women used to give birth in a hospital setting.

Data collected in the countries’ twelve districts in the past five months show an overall drop in maternal and infant mortality rates, according to Abass Kamara, public relations officer at the Ministry of Health. Port Loko district in northern Sierra Leone, for example, counted only one maternal death per month since the introduction of the free health services, compared to an average of eight maternal deaths per month before, he says.

Karmara is optimistic that these are first signs for a continuous improvement of maternal and child mortality rates in Sierra Leone: “Things are beginning to look up.”

Mayalie Bangura, 34, a teacher who lost her first child during childbirth, is one of the mothers who recently benefited from the new policy, when she was pregnant with her second baby. “After my water broke, my neighbours rushed me to the Satellite Clinic in Freetown. The nurses helped me during labour, gave me blood transfusion and other medicines,” she recalls.

Says Bangura: “After a week, I was strong again and discharged with my healthy baby boy. I could not believe that I did not have to spend a single dime. Before, it would have cost me over 800,000 Leone [$200].”