PORTO VELHO, Brazil, Nov 18 2010 (IPS) - The agricultural frontier state of Rondonia in Brazil is a byword for deforestation in the Amazon jungle, much of which has been cleared in the northwestern state for cash crops and a cattle herd that has grown to 12 million head. 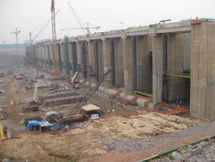 But industrialisation is arriving by the hand of the construction of two big hydropower dams and transport corridors — including roads, railways and waterways — that will provide an overland link connecting the Atlantic and Pacific oceans.

The plant, inaugurated in March in Porto Velho, the capital of Rondonia, will produce equipment for hydropower projects on Amazon jungle rivers in the state and the rest of Brazil, as well as neighbouring Bolivia and Peru, despite protests by environmentalists, indigenous groups and riverbank communities.

And Votorantim, one of Brazil’s largest industrial groups, opened a cement plant in Porto Velho in 2009, to meet the demand from the Santo Antonio and Jirau hydroelectric dams under construction in Rondonia on the Madeira River, one of the biggest tributaries of the Amazon River.

Santo Antonio alone will require as much concrete as 36 Maracanã stadiums — the famous pitch in Rio de Janeiro that is still the largest soccer stadium in South America — and as much steel as 16 Eiffel towers, according to Eduardo Bezerra, an institutional relations officer at Odebrecht, Brazil’s largest contractor, which is leading construction of the dam.

Abundant electricity and raw materials, as well as logistical advantages thanks to its location midway along the emerging transport corridor between Peru’s Pacific coast ports and Brazil’s Atlantic ports, will draw productive investment to the northwestern state, says Gilberto Baptista, superintendent of the Rondonia Industrial Federation.

The two hydropower dams will increase the country’s electricity generation capacity by six percent, with initial production of 6,450 megawatts, which will grow if plans to expand the original projects are approved.

More important, according to Baptista, will be improved connection to the national power grid, which will ensure steady energy supplies for industry.

The Santo Antonio and Jirau dams, opposed by environmentalists as another aspect of the predatory development policies traditionally followed in the Amazon, will require around 15 billion dollars in investment, nearly double the GDP of Rondonia.

The construction projects, which have employed 30,000 workers and have driven up demand for goods and services, have given a boost to local commerce and the construction industry, pushed up local incomes, and attracted workers from outside the state. As a result, housing prices and rents have surged.

The growth began to be seen even before the start of the construction of the dams in 2008. Rondonia’s GDP grew four times more than the national average between 2003 and 2007, according to economist Valdemar Camata, institutional relations manager at Odebrecht. In 2009, the state generated two-thirds of all jobs in northern Brazil.

Tax breaks and cheap credit for companies producing for both the domestic and export markets have driven the state’s growing industrialisation, he said.

The Rondonia of today is the product of the expansion of the agricultural frontier in the Amazon basin, pushed by the military regime that ruled Brazil from 1964 to 1985.

The dictatorship distributed free land to settlers, mainly from southern Brazil, who were lured to the rainforest by misleading promises of prosperity. As a result, the population of the state increased tenfold between 1970 and 1991.

Three decades after the wave of colonisation, only 54 percent of Rondonia’s 1.52 million inhabitants are natives of the state, Camata pointed out.

The initial crops – mainly rice, cacao, coffee and maize — gradually lost ground to cattle breeding, an activity that has been growing at a dizzying speed since the 1980s. There are currently 12 million head of cattle in the state: eight per inhabitant.

Beef has become the state’s chief product. The dairy and meat-packing industries have grown as logging and mining activities have shrunk as a result of deforestation and increasingly strict environmental regulations. Of 2,500 logging companies, “no more than 200 are left,” Camata said.

The expansion of transportation routes, which have been scarce and precarious, is another factor driving economic growth in the state.

Roads running across Rondonia and the neighbouring state of Acre, and to the borders of Bolivia and Peru, are being paved, and bridges and waterways are being built – all of which will make Rondonia a logistical hub for the Amazon and Andean regions.

Baptista explained that the state’s business community, which has a weak export culture, “only looked to São Paulo” and other large markets in eastern and southern Brazil, but is now starting to turn its gaze towards the Pacific, opening up “a new frontier of progress.”

That means a market of 140 million people in the neighbouring Andean nations, which, because they “have a low level of industrialisation, import supplies from the western United States and from Asia,” Camata said.

Rondonia, which is much closer, could make headway in those nations — Bolivia, Chile, Colombia, Ecuador, Peru and Venezuela — which have a combined GDP of 1.3 trillion dollars.

The potential is reflected in trade between Brazil and Peru. Trade between the two nations totalled just 727 million dollars in 2003, but had soared to 3.25 billion dollars by 2008, with Brazil enjoying a signiﬁcant trade surplus, said Camata, who noted that after a drop in 2009 due to the global economic crisis, exports have recovered this year.

Business and government plans that make Porto Velho a hub where several transport routes come together include the re- paving of the highway to Manaus, the capital of the state of Amazonas to the north; a railway to southeast Brazil, the country’s wealthiest region; and a waterway linking Rondonia with northern Bolivia and southeastern Peru.

Highway BR-319, which was built in the 1970s and is now impassable for most of its 870 kilometres, is to be repaved. But the process is being held up by stringent environmental requirements.

Environmentalists and local residents worry that the paving of the road will extend deforestation into the highly biodiverse and still-preserved heart of the Amazon.

But the road is a faster alternative than the parallel Madeira River waterway, and would facilitate the transport of perishable products, such as fresh produce, to the huge market of Manaus, an industrial hub of 1.7 million people, which has a route to the Caribbean — a highway that crosses Venezuela to the north — and a route to the Atlantic along the Amazon River.

Besides generating electricity, Santo Antonio and Jirau have the “strategic objective” of promoting integration between Brazil, Bolivia and Peru, “for the expansion of agribusiness” and exports of timber, said Guilherme Carvalho, one of the coordinators of the Federation of Organisations for Social and Educational Assistance, known as FASE Amazônia.

To that end, the plan is to put in sluices, in order to eventually extend the Madeira River waterway into the rugged upper part of the basin.

But that will only be feasible, Camata said, if two other hydroelectric dams are built on tributaries of the Madeira River: a binational dam on the Mamoré River on the border between Brazil and Bolivia, and another in Bolivia, on the Beni River.

That would extend the waterway 4,225 km, into central Bolivia and the southeastern Peruvian region of Madre de Dios.

However, environmentalists and social activists are opposed to these projects, because of the threat they would pose to the rainforest, biodiversity, and the living conditions of indigenous and other traditional communities in the Amazon, and the risk of aggravating climate change.

“The last Amazon frontier” is at stake here, says Alfredo Wagner de Almeida, an anthropologist who edited the book “Social Conflicts in the Madeira Complex”, a compilation of studies by 21 researchers, and who coordinates the Nova Cartografia Social da Amazônia project, which is mapping out the different cultural and social groups in the Amazon jungle region.