Cancer Treatment Out of Reach for Ugandan Women

SOROTI, Uganda, Nov 4 2010 (IPS) - Josephine Adongo’s heart leapt when she heard that two doctors from Kampala were offering free medical exams in Soroti. She was diagnosed with cervical cancer at a regional hospital more than a year previously, but unable to afford to travel to the capital for treatment. 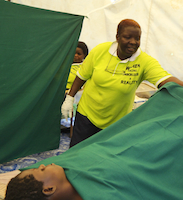 Adongo, a 68-year-old farmer who lost everything during Uganda’s long conflict against the insurgent Lords Resistance Army, was diagnosed with cancer at the local hospital in May 2009. But the only cancer treatment centre in Uganda was 300 kilometres away.

She was disappointed to find that the visiting doctors had only come to screen women and refer anyone with dangerous signs to Kampala.

The screening, which is rare service to ordinary women across Uganda, was being offered by ISIS-Women’s International Cross Cultural Exchange, as part of the commemoration of ten years of United Nations Security Council Resolution 1325. ISIS is a women’s organisation that seeks to raise attention on the reproductive health of women in post-conflict areas.

Cervical cancer, caused primarily by the human papillomavirus (HPV), is the second most common cancer among women worldwide. In Uganda it ranks as the most frequently occurring cancer among women. According to a World Health Organisation (WHO) September 2010 report titled, “Human Papillomavirus and Related Cancers in Uganda”, every year 3,577 women are diagnosed with cervical cancer and 2,464 die from the disease.

Women like Adongo, in remote regions are at high risk.

The number could also be high due to the low level of cancer screening and limited data on the HPV burden in the general population of Uganda. Cancer screening services are only available at regional referral hospitals and many women cannot afford the transport costs to these centres.

Women, particularly from war affected areas, are also at high risk because of massive sexual violence, often gang rapes, they were subjected to.

According to Dr Tom Otim, gynecologist at Mbale Hospital in eastern Uganda, early marriages among rural women also places them at higher risk.

“The other major hindrance to prevention and treatment of cervical cancer is lack of information,” said Otim.

“If the women came when the conditions that lead to cancer can be detected it would greatly help. But few women have information about the existence of this cancer.”

Most Ugandan women report to health centres with advanced stages of cervical cancer, which include irregular vaginal bleeding and in some cases post menopausal bleeding.

“The outcry of many women is, why do you refer us to Mulago for radiotherapy when we can’t afford it?” Otim said. “It is demoralizing to diagnose a woman and you cannot improve her life. But what is even more painful is when you tell them the service is available but they cannot afford it because they are poor.”

The few regional cancer screening and treatment centres are mostly donor funded and once the donor funds are finished, there is little government uptake of the projects.

Helen Angura is a registered midwife trained in cervical cancer screening. The hospital where she works, Mbale regional referral hospital, has been unable to care for women whose tests show early symptoms that could develop into cervical cancer.

The screening project was funded by Women Health initiative under the National Institutes of Health. It was launched in May 2009 but after a year the radiotherapy machine at the hospital is not in operation.

“We have been unable to treat women with lesions that could develop into cervical cancer because the nitrous-oxide gas used to run the machine ran out four months ago,” said Angura.

“We have sent letters to the hospital administration since June and we haven’t heard from them. Hundreds of women whom we screened have been waiting.”

In a country that spends less than 10 percent of its annual budget on health, issues like reproductive health and especially conditions like cervical cancer are mostly ignored.

Uganda runs a decentralized healthcare system but funding comes from the central government.

Otim says the government must invest in prevention of cervical cancer. HPV vaccines that prevent against HPV 16 and 18 infections are now available but few Ugandans can afford them.

“We have very safe vaccines that have been proven to prevent cervical cancer but one has to pay over 600,000 shillings (US$300) for an entire dose,” Otim explained.

There are only two hospitals offering free vaccination. The programmes are all funded by Pathfinder International, an organisation that seeks to ensure that people everywhere have the right and opportunity to live a healthy reproductive life.

The WHO report recommended that government must include HPV vaccines in the national immunization programme if the risk is to be greatly reduced. The report also called for the integration of vaccination and cervical cancer screening programmes so that every woman who is screened is vaccinated. It would also require a countrywide campaign to inform ordinary Ugandans about the disease.