CARIBBEAN: Adapting to Disaster as the New Normal

KINGSTON, Jamaica, Nov 28 2010 (IPS) - Residents in the communities around Trinityville in the eastern parish of St. Thomas, Jamaica are used to being stranded for several days at a time. 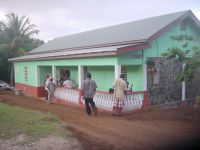 Surrounded by flood plains and numerous tributaries and streams, they can do little to prevent flooding. But the people had a plan to minimise the effects of landslides on their communities and to pre-position equipment and relief supplies for those periods of separation.

Head of the St. Thomas Environmental Protection Association (STEPA) Terrence Cover told IPS that Trinityville and the five outlining communities situated in the shadows of Jamaica’s highest peak in the Blue Mountains are affected several times a year by heavy rainfall as well as hurricanes.

Landslides caused by the denuded hillsides and frequent flooding result in regular stranding and impact the livelihoods of the residents.

More than 1,750 miles away in Wageningen, a coastal town in Suriname’s northwest, residents too had a plan. For several years, more than 100 homes in the town were inundated by floodwaters every time heavy rains fell in the Amazon. In February, they installed newly mended floodgates that will once again protect the town.

Built in 1949 in the low-lying wetlands along the banks of the Nickeri River, Wageningen was protected by a system of dykes and sluice (flood) gates that prevented flooding during the rainy season and from the river when water levels were high.

Over time, however, the sluice gates and dykes fell into disrepair and remained permanently open, leaving the 6,000 residents vulnerable to flooding from the sea and the river.

With grants of between $24,000 and $73,000, communities from Suriname on the South American continent to Jamaica in the north and Barbados at the eastern end of the Caribbean Sea are bolstering their ability to withstand natural disasters.

The CCDRMF is a component of the government of Canada’s regional Caribbean Disaster Risk Management Programme. It was designed to support non-governmental organisations and government agencies within CARICOM (Caribbean Community) in carrying out small-scale community projects to reduce the risks from the many natural hazards affecting the region such as floods, droughts, storms, and hurricanes.

Even as the Caribbean experiences more frequent extreme weather-related events possibly resulting from climate change, Fund coordinator Leslie Walling is confident that the project is making a difference.

“It is becoming clearer that the first steps to climate change adaptation must be adaptation to the current climatic extremes,” he told IPS.

The CCDRM Fund targets poor communities like Trinityville and the outlying communities of Danvers Pen, Font Hill, Mounts Lebanus and Vernon and Somerset that are the most vulnerable, and prone to natural disasters.

Most of the residents here are subsistence farmers, making a living cultivating their tiny plots, tending one or two heads of cattle, a few goats or chickens or other small animals.

Despite the need, the Trinityville project has stalled because it lacks the technical expertise required to design the storage facility. The absence of technical expertise is a recurring theme in projects submitted to the Fund by Jamaican communities because most require infrastructural work.

In fact, over the years several development projects have fallen by the wayside. In recent times, the problem is made more difficult because state agencies – which have been mandated to earn their keep – are reluctant to provide technical expertise without direct access to the donor funds.

In addition, allocations for community disaster risk management projects are provided only in response to impacts and donors do not provide funding for staff or technical work.

It is a common belief that the absence of a system to track the billions of dollars being spent each year in adaptation and recovery may be at fault, a position supported by Dr. Barbara Carby, head of the Disaster Risk Reduction Centre at the University of the West Indies.

A regional disaster management expert and former head of Jamaica’s national response agency, Dr. Carby forwards the idea that investments in adaptation measures are sidelined because “the results of these investments are not usually seen for many years until a disaster occurs”.

The inability of technical experts to quantify the amounts spent on disaster risk reduction programmes, Dr. Carby said, seem to have made developers and the political directorate reluctant to invest in infrastructure that will “stand up” to future hazards.

In other parts of the region, partnerships between government agencies, charities and professional groups are leading to many successes.

In St. Vincent, the Rainbow Radio League, a group of independent radio operators worked with government and other groups to create an emergency communications network linking nine vulnerable communities to critical agencies and institutions including the neighbouring islands of Martinique, Dominica, Grenada and St. Lucia.

Back in Wageningen, with the two sluice gates restored to full working order, the community is not only safer but has now partnered with government to create a special technical department to maintain and repair sluice gates around the district.

Walling credits the regional societies of the Red Cross for many of Fund’s successes. The Red Cross’s partnerships with communities such as Wageningen have helped to identify and prioritise the natural hazard risks in countries across the region. The charity is enhancing awareness and risk management capacities in communities across the region through a United Nations funded Community Vulnerability and Capacity Assessment (VCA) survey.

On the southeastern coast of Dominica, residents of the twin communities of Morne Jaune and Riviere Cyrique worked in collaboration with the national disaster office and the Ministry of Works to refurbish and establish an emergency shelter. One of the few certified disaster shelters in the region, the Tere Yam Community Shelter now serves the 592 villagers and provides space for dozens of other community activities.

Walling’s aim is to build technical capacities within beneficiary communities, alongside the 80 projects slated for funding between the 2008 start and when it ends in 2015. With 24 projects in various stages of implementation and another 39 eligible for funding, the CCDRM Fund manager is seeking further collaboration to fulfill the project’s mandate.

“If you can’t cope with the current hurricane and extreme rainfall now, then you won’t be able to cope with what is to come,” Walling said.