JOHANNESBURG, Nov 28 2010 (IPS) - South Africa is Africa’s largest economy and the continent’s biggest emitter of greenhouse gases. The country’s emissions per capita are on par with those of the United Kingdom, and more than twice as high as China’s emissions by the same measure. 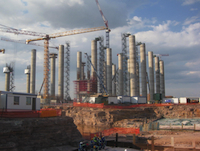 Construction has begun on Medupi, a new power plant that will produce 4,800 MW - and 26 million tonnes of CO2 - per year. Credit: Eskom

South Africa is presently responsible for about half of Africa’’s emissions, with 80 percent of its estimated 400 million metric tonnes of CO2 coming from the energy sector alone.

Africa is expected to be disproportionately affected by climate change, with a global rise of two degrees Celsius – the acknowledged worldwide target – resulting in a possible four to five degree rise in many parts of the continent. Changes in temperature, quantity and distribution of rainfall have enormous implications for farming, compounded by weak infrastructure and the vulnerability of impoverished populations.

But going into negotiations at the U.N. Climate Conference in Cancún, it is likely that South Africa will align itself with other big developing economies, advocating an approach that prioritises poverty alleviation over any binding commitment to reducing emissions.

Ahead of the last 15th Conference of Parties to the U.N. Framework Convention on Climate Change in Denmark in December 2010, South Africa announced a voluntary commitment to reduce emissions by 34 percent below “business as usual” levels by 2020. This reduction is, however, conditional upon international support that is not certain to materialise.

South Africa’s Minister for Water and Environmental Affairs, Edna Molewa, will be representing South Africa’s interests at the 16th Conference of the Parties to the U.N. Framework Convention on Climate Change in Cancún, Mexico.

“We believe that it is quite important that as developing countries we also get an opportunity to allow development to happen because of poverty,” Molewa says. “We need to allow space for us to actually introduce those emissions [reductions] over time, because developed countries have gone through the processes.”

The country experienced rolling blackouts in 2008, severely impacting the mining and manufacturing sectors, and causing the cancellation of big energy-intensive projects. Securing an energy supply to support economic growth and reduce high levels of poverty remains uppermost for planners.

The short-term answers are dirty: the coal-fired Medupi power station is expected to contribute 4,800 megawatts to the national electricity grid from 2012, and to emit around 26 million tonnes of carbon dioxide a year, despite employing supercritical coal technology, which is less polluting than older coal plants’. The subsequent Kusile station is projected to have similar outputs on both scores.

In its draft energy plan, government expects that by 2030, 48 percent of the total energy demand will be met by coal, 16 percent from renewable sources and 14 from nuclear generation, including the construction of six new nuclear power stations, the first of which would come online in 2023.

The draft plan also considers a “low-carbon scenario” which would involve an energy mix of 36 percent coal-sourced electricity, 32 percent renewables and 12 percent nuclear. But planners found that although this scenario would cut carbon emissions by 20 percent more, it would drive up costs by 50 percent than the “balanced scenario” the draft plan endorses.

Richard Worthington from the Worldwide Fund for Nature says that in South Africa there is a perception that a sustainable pathway forward puts jobs at risk. “But the evidence is clearly out there that a low-carbon economy is a more labour intensive economy,” he says. “The less you rely on the concentrated energy of fossil fuels, the more likely you are to need more people working.”

Greenpeace International and the European Renewable Energy Council have set out a vision for a low-carbon energy future involving increased efficiency, renewable energy sources and expanded reliance on combined heat and power generation. Greenpeace says its Energy [R]evolution scenario would secure power for economic growth while creating an additional 78,000 jobs in the energy sector by 2030. It would also reduce the country’s emissions – 2050 emissions would fall by 60 percent as compared to 2005 levels.

An important challenge to green scenarios like this one is how quickly the cost to consumers per unit of renewable energy can be reduced to match the price of polluting energy: higher energy costs for either industry or the country’s poor are viewed as unacceptable.

Although it is well-endowed with solar and wind energy resources, South Africa has not developed a robust renewable energy industry.

The Copenhagen Summit failed to reach a binding agreement on reducing emissions, primarily because developed countries were unwilling to sign up to new commitments without matching commitments from the rising developing powers. Little progress has been made on this front during 2010 and few expect the Cancún summit to achieve a breakthrough.

But with South Africa hosting the 2011 round of climate change negotiations in Durban, Africa – and the world – will be looking for it to demonstrate leadership in reconciling development priorities and the drastic reductions in greenhouse emissions that the world needs.