LILONGWE, Nov 25 2010 (IPS) - The announcement that 5,000 new classrooms will be built thanks to a $140 million World Bank loan would come as welcome news at the Chitowo Primary School – if only the children sitting on the floors, perched on doors and in windows, even taking lessons in the dust beneath trees in the yard could hear it. 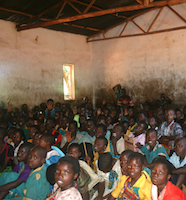 There are just five classrooms for 1,400 pupils at Chitowo Primary. Credit: Claire Ngozo/IPS

The school, which offers eight primary classes from Standard One to Eigh in Dedza district, a rural area in central Malawi, is bursting at the seams. It has 1,400 pupils and only five classrooms.

“Enrolment at the school keeps on increasing and we cannot manage to have all the children learning in the few school blocks that we have,” Mary Chirwa, a teacher at the school, told IPS.

Some classes are cancelled during the rainy season mainly for those who learn under the trees, Chirwa said.

She explained that lack of classrooms contributes to an increasing number of dropouts, especially girls because, she explained, the lack of facilities extends to available toilets.

“Up to 65 girls dropped out of Standard Six last year. The drop-out rates are even higher when it starts raining,” said Chirwa.

The crowded conditions are perfect for catching air-borne diseases such as flu and colds, according to Baidon Kamwendo, a father of three children who go to the school.

“My children usually enjoy good health during school holidays, but they are frequently racked with coughing when school is in session. Two of them learn under trees and they sit in the dust, while one studies in a crowded classroom of up to 65 pupils,” Kamwendo said.

Students taking lessons under trees and crowded classrooms is common in primary schools throughout Malawi, where enrolment has increased steadily since the country introduced free primary education in 1994.

When he delivered the budget statement in May 2010, Finance Minister Ken Kandodo told Parliament that the education system in Malawi faces severe challenges arising from the drive towards universal primary education.

“The existing infrastructure at all levels of the education system is inadequate,” Kandodo admitted.

According to reports by the country’s Ministry of Education the enrolment rate leapt from 1.9 million just prior to the waiving of school fees for primary school to 3.2 million during the 1994/1995 school year.

The Malawi Millennium Development Goals (MDGs) report for 2010, released on Nov. 22, says 83 percent of school age children are in school – up from 73 percent in 2006.

The report indicates that there are lower levels of enrolment in rural areas than in the cities. The reasons for this are not given, but the better facilities in urban schools is likely to be one factor.

Tsokankanansi Primary School, in Lilongwe, the country’s capital, certainly has no classes under a tree. The school is located in one of the city’s affluent areas, Area 43.

Not every city school is as well-appointed as Tsokankanansi; it was at Mkomachi Primary, elsewhere in Lilongwe, where a tree fell in 2004, killing two pupils in the class gathered beneath it. But a $140 million loan from the World Bank intends to improve standards in poor urban areas as well as the countryside.

The Ministry of Finance issued a statement on Nov. 24 confirming that the loan will be used to construct 5,000 new classrooms for primary and secondary schools over the next five years, bolstering Malawi’s efforts to achieve its development goals on education.