KAMPALA, Nov 30 2010 (IPS) - Uganda has lost more than two million hectares of forest since 1990, mostly converted to farmland by a growing population of smallholders. Carbon finance through the REDD programme is often presented as one way to arrest this destruction, but only if the benefits clearly translate to the grassroots. 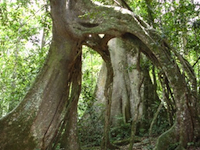 Almost a fifth of greenhouse gas emissions worldwide comes from the destruction of forests – second only to the energy sector. The idea behind REDD – reduced emissions from deforestation and forest degradation – is to give carbon stored in forests a financial value; financing the protection of forests in developing countries like Uganda with money raised from selling carbon stored in those trees to polluters in the developed world.

Finalising details is expected to be one of the major tasks of the U.N. Climate Conference taking place in Cancun, Mexico beginning on Nov. 29. One of the many challenges in actually implementing REDD – now REDD+, which extends the concept to conservation and sustainable management of forests – is the meaningful involvement of forest-dependent people.

More than two-thirds of Uganda’s forests are on private land, controlled by individual small-scale farmers or held under communal title. Xavier Mugumya, a team leader with the National Forestry Authority’s (NFA) Carbon Portfolio Development Programme told IPS the preservation of these privately-held forests must be a top priority.

“We have to face the reality that most forests are owned by individuals and communities and for REDD to succeed there must be well spelt-out mechanisms to bring in more incentives to these people to conserve the forests,” said Mugumya.

These wooded lands are supposed to be overseen by District Forest Services but the DFS’s powers are largely limited to issuing permits for commercial activities.

“The current land use policy leaves most decisions to individuals,” Mugumya explained. “The government can only manage [things] through the issue of permits in cases of conversion of trees into products like timber, but the conversion of forest into agricultural land is up to the individual and this has been responsible for the most loss of the forest cover.”

David Kureeba, a member of the National Association of Professional Environmentalists (NAPE) agrees.

“The land use policy makes any intervention for private forests difficult,” he said, adding that existing parks and forest reserves have failed to make conservation attractive.

Mugumya is also Uganda’s REDD negotiator, and he is involved with developing what’s called a Readiness Preparation Proposal. The R-PP is part of a process – supported by $200,000 from the World Bank – that sets out how the main drivers of deforestation will be countered in a REDD scheme; setting out budgets, regulations, monitoring systems, and guidelines for community involvement.

The first draft fell short of the mark.

“[Uganda] came up with a proposal that was found unsatisfactory by the World Bank and we have gone back to bring out the concerns and needs of forest-dependent people whom this mechanism will either benefit or not depending on the implementation,” said Kureeba.

Communities who will be directly affected by REDD were not adequately involved in drafting the proposal. Uganda has received a further $185,000 from the Norwegian government to complete the consultations.

“The first consultations were done by NFA, but now with the Norwegian funds, they have made it a must to include civil society organisations in the consultation process. In fact NAPE is one of the consultants brought on board to capture concerns of people living around forests in the central region,” said Kureeba.

As it reworks the country’s policy, Uganda has possible models for monitoring, governance and local benefit-sharing in the form of the International Small Group Tree Planting Program (TIST) and the Nile Basin Reforestation Project. In both of these cases, small groups of subsistence farmers engage in activities like tree planting and sustainable agriculture for sale of greenhouse gas credits.

David Mwayafu and Leo Peskett from the Uganda Coalition for Sustainable Development carried out an evaluation.

Under the first programme, farmers get paid 35 Uganda shillings – about 20 cents – per tree per year.

“Assuming a farmer plants 400 trees on one hectare under TIST and that the TIST farmer re-negotiates [extends] their contract,” said Mwayafu, “the farmer under TIST will earn 400 trees x 30 payments x 35 shillings = 420,000 shillings per hectare.”

Expectations – and needs – of participants are often high, but that works out to $6 per hectare per year – less than $200 over 30 years.

In the Nile Basin Reforestation Project, community organisations are paid for trees grown on National Forest Reserve land; in this scheme, the World Bank purchases the carbon credits, and the NFA will pass on 15 percent of the total income raised. Mwayafu and Peskett note that “there is little understanding about the scale of benefits among [members of] the community association, which could result in risks for them and the NFA as the project progresses.”

But Mugumya says interventions like REDD will revitalise the country’s forestry sector.

“We have policies that could save forests but the implementation costs money and when you draw up a budget no one wants to look at it,” he said. “The major hurdle is strengthening the policies and putting in place an incentives strategy that will make trees worth more when they are still standing than when they are down.”

Yet this may be a dangerously optimistic view. While considerable time and resources are invested in working out a deal on REDD, it may prove important to simultaneously promote the intrinsic benefits of protecting and restoring forests and tree cover, as TIST does with its projects in Tanzania, Kenya, India and Uganda.

Trees on and around farms can provide fruit and nuts that can be sold; they provide shade for crops, protect against erosion and in some cases maintain nutrients in soil. Rural communities also make extensive use of densely wooded areas where there is no farming, and reforming the management of such forests in the name of carbon sequestration must be carefully considered.

NAPE’s Kureeba: “We have to go on the ground and find out whether people are buying the idea of REDD. Much as we bring money, people need to know and propose what will happen to forest management, to look at issues of access to the forest for food, herbs, poles for building and other issues like culture.”

Kureeba is worried that these details – vital to the ultimate beneficiaries of REDD – are of little interest to policy makers. “The problem is that government is after getting money. There’s less interest in the processes that will make a REDD initiative work for the people that depend on forests.”

“The issue of equity is important. Is the money going to go down to the intended beneficiaries given the corruption levels here or will it be like the money embezzled from Global Fund?” Kureeba questioned.

In 2005, the Global Fund to Fight AIDS, Tuberculosis and Malaria suspended a $367 million dollar grant to Uganda after auditors found government officials were embezzling large amounts of the money, intended to strengthen health services.

While the health minister and two deputies were sacked, concerns remain that funds raised for forest communities on global carbon markets will also be vulnerable to corruption, misdirected to administrative costs or out rightly stolen.