KAMPALA, Nov 17 2010 (IPS) - Thousands of women were raped during Uganda’s war but there have been few government efforts to assist them, especially with psychosocial and counseling services. 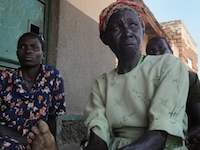 Women at workshop assessing the government's recovery plan for the north: sexual violence is an aspect of the conflict that has not been addressed. Credit: Rosebell Kagumire/IPS

Anna Grace Nakasi, recently chosen to contest next February’s local council elections for Tubur subcounty, in Soroti district in North Eastern Uganda, contracted HIV when she was raped during the war.

Nakasi was gang raped on three different occasions — first in 1987, then 1988 and 1990 — by soldiers who formed a heavy military presence in her village.

“The first time was in 1987 when I met nine soldiers on patrol who gang raped me until I lost consciousness. I later woke up in a hospital bed,” she told IPS. “I could tell they were government soldiers.”

Nakasi contracted HIV and developed a fistula. She was rejected by her husband and family and lived alone in a forest for many years.

She overcame her trauma with the support of different aid groups that have also supported her in campaigning for women’s economic empowerment and fighting stigma.

She runs paralegal activities, often following up cases of sexual violence in the area and encouraging women to face their offenders. She has a large support base for her candidature for council due to her work with people living with HIV and AIDS.

“I have so far managed to follow-up a case and have a man jailed for rape,” she says.

But Nakasi’s story of her rise from victim of sexual gender based violence to survivor and leader is a unique one.

The two-decades long war in northern Uganda between government and the rebel Lord’s Resistance Army (LRA) resulted in the internal displacement of about 1.5 million people and the death of thousands. Women in internally displaced persons (IDP) camps suffered sexual violence from government soldiers and civilians. Although there are no official figures on the numbers of women affected, reports show this was wide spread. The rebels are well known for child kidnapping for use as child soldiers and the abduction of girls as sex slaves.

The war affected the north and north-eastern parts of Uganda until 2007 when the LRA rebels were pushed out to DRC after failed peace talks with the government mediated by the government of South Sudan.

A recent government post conflict recovery programme launched last year lacks a component on addressing the effects on victims of sexual violence in the war.

Further, recommendations calling for reparations for victims of sexual violence made by a commission of inquiry into violations of human rights in Uganda, covering the period from independence in 1962 through the second Obote Regime (1980 – 1985), have never been implemented.

And according to a Uganda United Nations Security Council (UNSCR) Resolution 1325 monitoring report released on Nov. 9 by the Kampala-based Center for Women in Governance (CEWIGO), many cases of sexual violence in Uganda go unprosecuted. UNSCR 1325, which last month marked its 10th anniversary, acknowledged, for the first time, sexual gender based violence in conflict as a war crime and a crime against humanity.

The report, aimed at tracking Uganda’s progress on the implementation of the resolution, found that many cases are not reported. Rape is the least reported sexual offense in Uganda and the Ugandan law still does not recognise marital rape.

Of those cases that are reported, about half are prosecuted and very few carry penalties at the end of the day.

In 2009, Uganda registered and investigated 619 rape cases. Of those, 37 percent (228) were prosecuted and only five percent were penalised. More than seven thousand cases of the rape of children were reported and only 467 of these cases resulted in a penalty. Five hundred and fifty women reported indecent assault and only 79 were penalised.

An injustice to victims of sexual violence

Maude Mugisha from CEWIGO says most families cannot afford to take victims for medical examination or to transport the police to the crime scene. As a result, they opt to negotiate with the perpetrator. Criminal justice in Uganda requires any person who has been a victim of sexual violence to have a medical test, which is pertinent to the success or failure of a case.

However, only authorized police surgeons can carry out the examination. Not only are the police surgeons insufficient but victims must also pay between US$15 and US$25 to be examined.

“This is the greatest injustice that the survivors of sexual violence are subjected to in Uganda,” says Judy Kamanyi, a consultant in gender and development issues.

Rebecca Kadaga, the Deputy Speaker of the Parliament concurs. “It cannot only be a police surgeon that can examine a victim if we are to deliver justice. The examination services should be even carried out by midwives so that women stop paying so much money to access justice.”

Kamanyi says government should put in place shelters for women whose lives are in danger and also come up with an emergency plan for abused women and children that caters for their safety.

Access to justice for survivors of gender-based violence is also limited by the fact that sexual offenses are only tried at high court level and these are found in only in five regions of the country. Victims travel long distances to access the courts only to find there is no police surgeon present for the hearing. As a result, sexual offenses cases can take years to be heard.

According to CEWIGO, these gaps in delivery of justice to women victims of sexual violence show that Uganda is far from implementing regional and international instruments meant to safeguard women’s lives, especially in the case of war time rapes.

Miria Matembe, a founder member of CEWIGO says women must continue to pressure governments, especially in the Great Lakes Region of Africa, to implement resolution 1325.

“This resolution remains extremely important for us … We are a continent still infested with conflict with high levels of gender based violence,” she says.

The LRA rebels remain active in DRC, Central African Republic and South Sudan where they continue with abductions.