NAIROBI, Kenya, Dec 20 2010 (IPS) - According to Vision 2030, which is a government strategic plan on how to boost growth and development in Kenya, there are an estimated five million out of an estimated eight million households who depend directly on agriculture, despite the fact that agriculture continues to be one of the most under-budgeted ministries. 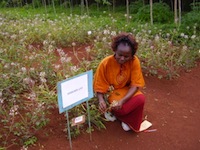 Under the current financial year, agriculture has only been awarded a meagre 3.6 percent of the national budget, which a long way off the 10 percent mark that the government had committed to set aside for the agricultural sector. With an overdependence on agriculture for both subsistence and commercial purposes, a large number of the population is in dire need of food aid.

Aid organisations such as the World Food Program (WFP), say an estimated 1.6 million Kenyans face starvation. The situation has deteriorated due to drastic climatic changes, whereby the rains are no longer reliable and most Kenyans are yet to adapt to innovative and sustainable means of trapping rainwater.

According to the Kenya Food Security Meeting (KFSM) – the main coordinating body that brings together food security actors in a forum to map out various strategies to improve food security – while there has been a notable improvement of short rains in severely drought-affected pastoral areas, there have been a general rain failure in the country since 2007, which has resulted in the deterioration in food security.

It is against this background that researchers have intensified research on crops that can grow in most parts of the country and which can be used to alleviate food insecurity.

This has led many Kenyans to accommodate traditional vegetables that were earlier dismissed as the “poor man’s crop”. “These vegetables grow easily and for many people they are seen as weed and only the very poor would turn to them for food. They are, however, very nutritious and I grow them on my farm together with the more modern crops like kales,” explains Tabitha Njoki, a small-scale farmer from Juja County, Central Kenya.

“The research was inspired by my experience of having had to live on vegetables since I was a child because I was allergic to animal proteins. I therefore know that traditional vegetables are rich with nutrients and are easy to grow,” explains Abukutsa. “I wanted my research to improve the uptake of traditional vegetables and to help farmers earn a living from selling the crops.”

“Exotic vegetables have a market, but largely among the rich. They are expensive and therefore marginalise Kenyans who live below the poverty line, and who account for an estimated 60 percent of the rural population, according to government reports such the Kenya Health Demographic Survey of 2009,” explains Nduati Kigo, an agricultural officer in Central Kenya.

He adds that since the available exotic vegetables are out of the reach for the ordinary Kenyan, and with limited available options due to the lack of mainstreaming of the traditional vegetables, food insecurity remains a reality for many households.

The negative impact is to such an extent where “in the area of crop research, traditional vegetables have only gained recognition at the national, regional and international level only recently,” adds Abukutsa.

Her research has been multifaceted and has involved solutions to the negative attitude towards traditional vegetables. This has necessitated her to provide instructions on how to grow various vegetables, as well as provide recipes on how to prepare them.

“Over the years, I have trained 77 contact farmers in Western Kenya and 23 farmers in Central Kenya on seed production of traditional vegetables, with an objective of following their progress closely and also having them as role models to promote and reposition what had been previously dismissed as food for the very poor but has been proved to be very rich in nutrients,” expounds Abukutsa.

She further explains that due to concerted efforts from various stakeholders to popularise traditional vegetables, they are now available in restaurants, markets and even supermarkets and people do not have to travel to the rural areas to access them.

However, the professor explains that there is still a lot of ground to cover for Kenyans to accommodate traditional vegetables as a food option to an extent where farmers can turn to them for cash crop on a large scale.