BOLIVIA: Madidi National Park and the Curse of Petroleum 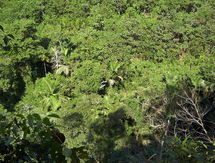 With an area of nearly 1.9 million hectares, Madidi extends through the provinces of Iturralde and Franz Tamayo, in the upper Amazon river basin of northwestern Bolivia. Its topography includes mountains standing 5,760 metres and plains just 180 metres above sea level.

The government’s plan to obtain tax revenues from oil and gas drilling and from economic development in the area has been challenged by activists who favour the conservation of the approximately 5,000 plant species and 1,370 animal species found in the Madidi.

Carmen Capriles, an expert in climate change, told IPS that the three greatest threats to the nature preserve are the construction of a highway within the park, drilling for oil, and a planned hydroelectric dam.

The immediate concerns include trafficking in wild animals, the high rate of deforestation and the launch of a government programme to colonise areas near water sources. Capriles says these would have negative impacts on the indigenous communities that rely on the rivers for food and would lead to the inappropriate use of the zone’s resources.

In 2009, Capriles visited the settlement known as El Tigre, where she found that 80 percent of the population had suffered leishmaniasis, a parasitic diseases transmitted by sand flies. She also collected testimonies about the disappearance of wild animals resulting from unregulated subsistence hunting.

But that is nothing compared to the impact the planned settlements would have on the region, said the researcher.

“Up to 60 percent of the park’s biodiversity could be affected by the megaprojects,” which would alter the ecosystems, watersheds and wildlife in general, Mirna Fernández, coordinator of the Save the Madidi Campaign, told IPS.

The announced El Bala hydroelectric dam would flood much of Madidi National Park and the adjacent biosphere reserve and indigenous territory Pilón Lajas, destroying the landscape and its biodiversity and forcing 17 indigenous communities to leave the area, according to Fernández.

Based on statements from residents of the park, the activist denounced the initial steps being taken to carry out the project, which the leftist government of President Evo Morales declared a national priority in Decree 29191 in July 2007.

Fernández is mostly worried about the oil exploration and drilling authorised by the Morales government in 2007 for the North Sub-Andean block, one of the two into which the country has been divided for petroleum operations — and which includes the Madidi Park.

Oil exploration would entail the construction of roads and infrastructure, deforestation and biodiversity loss, human settlements, contamination of water and soil, and increased emissions of climate-changing gases, enumerated Fernández.

“We know that the government is firmly determined to drill for petroleum in Madidi, because as President Morales said: ‘I went to the Madidi and I saw that the petroleum is pouring out’,” Teresa Flores, vice-president of the environmental defence group PRODENA, told IPS.

“The fact that there are emanations of petroleum does not mean there is sufficient quantity to justify drilling,” she said.

Flores pointed out that the giant oil companies Total (France) and Petrobrás (Brazil) had conducted seismic explorations and then withdrew, “because surely there was not enough oil to make it worth the investment.”

Ricardo Coello, director of environmental monitoring for Bolivia’s National Protected Areas Service (SERNAP), told IPS that so far seismic exploration has only taken place in the Liquimuni field, adjacent to Madidi but outside the park’s border.

He pointed out that Bolivia’s Hydrocarbons Law requires environmental impact studies before undertaking any petroleum projects, and no such request has been made that involves the park. He also noted that according to the 2009 Constitution the nation’s protected areas are a common good of the Bolivian people.

“We believe that seismic exploration is not justified, even more so now that President Morales has given his support to Ecuador’s Yasuní Initiative” to leave oil in that biodiverse Amazonian region untouched, Flores said.

PRODENA is promoting no-petroleum initiative for the Madidi, following the lines of Ecuador’s historic decision in August to leave untouched the approximately 20 percent of the country’s petroleum reserves located in the Yasuní Park — in exchange for compensation from the international community through a special trusteeship.

But Flores pointed out that the big difference between Yasuní and Madidi is that the Bolivian park’s oil reserves have not been quantified — and vast deposits are unlikely to be found there.

“As a result, the monetary value of the Madidi fields cannot be calculated,” states the campaign’s argument against petroleum development.

But PRODENA also underscores that while preventing oil drilling is important not only for preventing greenhouse gas emissions, but also for the wide range of environmental services that an intact park can provide.

Climate expert Capriles, meanwhile, pointed out that megaprojects in Madidi lack widespread support because they are geared towards for-export petroleum development, without a component that would improve the living conditions of the area’s indigenous communities.

Once again, the indigenous peoples “will be forgotten,” she said. Madidi is home to 46 indigenous communities from six different tribes. Those residents have not yet been consulted about the projects planned for the park.

Fernández, of the Save the Madidi Campaign, believes efforts to exploit non-renewable resources in protected areas indicate “reprehensible incoherence” with President Morales’s discourse about protecting the environment and his repeated invocations to “Pachamama” (Mother Earth), a deity of the Andean indigenous peoples.

In fact, political analysts and environmentalists alike say they see internal tensions between those in the government who promote economic development and those who promote environmental protection in areas of high biodiversity — but such tensions have not been overt.

For instance, SERNAP official Coello said that the hydroelectric dam plan dates back years, but his office has not received a request for the environmental impact study needed to move forward.

Fernández suggested that effective alternatives are needed to fight poverty in the area, without adding environmental problems, and instead making appropriate use of international cooperation “so that the official discourse in favour of Mother Earth is translated into government policies for sustainable development.”