KINSHASA, Dec 8 2010 (IPS) - Health officials’ fears that insecurity and a lack of resources could lead to fresh outbreaks of preventable diseases are being proved painfully accurate in the Democratic Republic of Congo. Polio – thought to have been eradicated in DRC five years ago – has made a frightening reappearance in Central Africa. 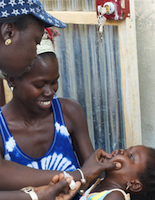 The aim is to vaccinate 72 million children at risk across Africa in 2010. Credit: Ricci Shryock/UNICEF

The World Health Organisation has officially recorded 139 cases in the country this year, but poor data collection means many more may have been missed. Cases have also been recorded in the Republic of Congo to the north, and Angola to the south – Angola is thought to have been the source of recent resurgence of polio in the subregion.

Thousands of vaccinators have fanned out across 16 districts of the DRC in a mass immunisation campaign, part of a broader effort covering 72 million children across Africa. Pierrette Vu Thi, DRC representative of the United Nations Children’s Fund, UNICEF, has called on warring parties especially in the east of the country to cease fire to allow the vaccinations to reach every child under five.

But the outbreak does not exactly come as a surprise.

At the start of the year, the United Nations Development Programme warned that in DRC, “illnesses otherwise eradicated such as trypanosomiasis, leprosy and plague had returned and that the numbers could rise by between 20 and 22 percent in the eastern provinces where there are still problems and armed conflicts if urgent measures are not taken.”

In July, the financial director of the DRC’s Expanded Programme on Immunization (EPI) told IPS that a shortfall in funding meant immunisation of children was failing.

“Of the more or less $130 million needed to cover the vaccination needs of babies from zero to 11 months in 2010, the Congolese government has said it will not be able to contribute more than one percent,” he said. “[In this period,] nine million infants were left exposed to serious illnesses like poiio which can leave them disabled for life.”

The entire 2010 budget for the DRC, already cut to the bare minimum, is around $5 billion and is 50 percent financed by the international community. The country devotes only 5.5 percent of its resources to the health sector as a whole.

“In Orientale Province, the largest in the country, more than 700,000 infants have not had access to vaccines from the beginning of 2009 until the end of the first trimester of 2010; this exposes them to yellow fever, tuberculosis, measles, polio and other illnesses, ” said Jean Paul Makala, an official in the Ministry of Public Health and in charge of statistics for the EPI.

Génie Bulenda, a nurse at Sainte Rita, a private health centre in the eastern city of Bunia, is mother of a six year old daughter.

“The EPI said for months that it didn’t have sufficient stocks of vaccines and would not be able to store such a large quantity for want of electricity [for refrigeration]. My daughter who was born in March 2010 was only vaccinated for the first time when she was two months old, at the beginning of May.”

Epidemiologist Claude Muhiga said, “it has been years since the country has been able to cover the full need for infant vaccination. The consequences are clear in many villages of the country: one finds dozens of young people with physical and mental disabilities due to not having been vaccinated at a young age.”

“The main reasons that prevent children from being vaccinated are the unavailability of vaccines, the lack of fuel to [power generators and fridges to] keep vaccines cold,” he said. In addition, it’s difficult to gain access to many parts of the country due to bad roads or armed conflict, and a lack of skilled personnel and health centres is a further obstacle.

The challenge is aggravated by parents who refuse to bring their children for vaccination for religious or traditional reasons.

Sophie Mokill, a housewife and mother of five children, told IPS. “I don’t know the origins or composition of these products that they come to give our children and I don’t need to vaccinate them all the time. You can see they are in good health…

“It’s God who protects children, not vaccines that they bring us from Europe.”

Her opinion is not shared by Adeline Mpasi, a resident of the peri-urban Kinshasa neighbourhood of Kitokimosi, whose four-year-old daughter can’t walk, paralysed by polio.

“When this child was born, my family lived in Kasongolunda, in Bandundu Province, where there was no vaccination campaign for children. It was too late when her father and i noticed that she had developed a paralysis in her lower limbs. And the doctors could not do anything.”