REYKJAVIK, Dec 2 2010 (IPS) - In Iceland, strict quotas on the fishing industry result in unnecessary waste and distort data, say critics of the system. 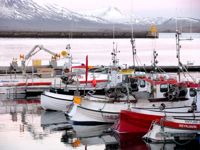 The Icelandic commercial fishing industry adheres to quotas set by the Fisheries Ministry that allow individual boats to fish a fixed amount of a species of fish per day.

Quotas are based on a variety of considerations, from regulations set by international agreements to the opinions of individual fishers and boat owners. The intent of the quotas is to support sustainable fishing. But critics say that the quotas are detrimental to the industry as a whole, resulting in miscalculated data and excessive waste.

Sigmar Thor Ingason, a fisherman familiar with the Icelandic system, told IPS that although boats are allocated quotas for a particular type of fish, the waters they fish in often contain a variety of fish species that inevitably get caught in the nets and hauled aboard.

If the intention is to catch cod, he said, “Other fish such as saithe, redfish, and haddock will inevitably be caught as well.

Usually the proportion is 70 percent cod and 30 percent other species,” he estimated.

The bycatch—the fish not included in the allotted quota—can’t be brought back to shore. Most often, the bycatch is thrown back into the sea. Because these fish generally do not survive the fishing process, the majority are dead when discarded.

Gretar Mar Jonsson, who has been fishing Icelandic waters for more than 30 years, blames the quota system for encouraging this waste by bypassing the landing process, whereby fish caught at sea are processed and then sold without being weighed and recorded. Jonsson said that because the quotas are allocated by weight, fishers and boat owners keep only the most valuable fish and throw the rest back into the sea.

“They don’t want to fish the cheap fish which bring in little money, as the quota is expensive,” he said.

Jonsson estimated that about 20 to 30 percent of every catch is discarded, which results not only in excessive waste but misrepresents data used to calculate fish populations that influence the quotas.

“This means that ichthyologists do not have the correct figures for fishing in Icelandic waters, which distorts the whole picture of how much is caught,” he said.

Jonsson holds strong views about how to address the problem. “The fishing management system needs to be modified by taking up a day system whereby days are allocated to each boat,” he said. “This would prevent discard, as the motivation for it would disappear.”

At present, Icelandic authorities are unwilling to concede that a problem exists.

“Boats have quotas and catches are monitored by the Directorate of Fisheries,” said Olafur Astthorsson, Deputy Director of the Marine Research Institute (MRI) in Iceland.

“Illegal fishing does not exist in Iceland because of the fishing management system that exists here,” he added.