PORT-AU-PRINCE, Dec 13 2010 (IPS) - After almost a week of violent protests over preliminary elections results that left at least five dead, Haiti awoke to an eerie and tense calm Monday after a well-coordinated trial balloon was launched late Sunday night. 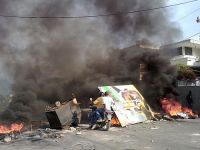 Men on a motorbike pass a burning campaign poster on Dec. 8, 2010. Credit: Digital.Democracy/flickr

After a rumour-filled weekend, the Provisional Electoral Council (CEP) announced that a special commission was recounting the vote tallies, and that in the meantime, over the next three days all candidates could file complaints of suspected miscount or fraud.

At the same time, nine foreign ambassadors – including ambassadors from the United States, Canada, France the United Nations, Brazil and the Organisation of American States – issued a statement supporting the move and calling for candidates to “ask their supporters to abstain from all use of violence, that hurts only the Haitian people”.

The unity expressed by the “friends of Haiti” stood in stark contrast to last week’s barrage of statements from U.S. officials which could only be interpreted as attacks on the Haitian government and the elections officials.

Washington’s criticism culminated with a Dec. 10 news release from Senator Patrick Leahy, who called for the U.S. to “support of the Haitian people’s right to choose their leaders freely and fairly” and urged the suspension of “direct aid to the central government and visas for top officials and their immediate family members”.

Leahy is head of the Senate Appropriations Committee’s Subcommittee on the State Department and Foreign Operations.

The statement – circulated in three languages for the benefit of the Haitian media – came three days after the publication of preliminary election results on Dec. 7, which some political parties and candidates said were fraud- ridden.

The claim, especially from third-place presidential candidate Michel “Sweet Mickey” Martelly, a popular singer, sent thousands into the streets of the capital and other cities. For several days the country was wracked by tension and – in some cases – protests.

The demonstrations and violence left dozens wounded and at least five dead, including three people killed in Les Cayes by police from the U.N. peacekeeping mission, the Mission des Nations Unies pour a Stabilisation d’Haiti (MINUSTAH), according to Radio Voix Claudy Museau.

Protesters in the southern city set fire to the Electoral Departmental Office, but the details of the shooting deaths remained unclear five days later.

In the capital, streets remained barricaded until Saturday, Dec. 11, meaning that most of the capital’s nearly 1,000 refugee camps received no water, nor had their latrines “desludged”, for four days in a row.

The virtual lock-down of the country has also meant that cholera treatment centres have not been able to get the supplies they need or bury the dead. In Les Cayes – where a half-dozen buildings were torched on Dec. 7 and 8 – Radio Caraibes reported that the bodies of deceased cholera victims – which represent a significant health risk – were lying in the hospital yard and relayed the hospital’s call for assistance.

As of Dec. 5, cholera had killed over 2,000 Haitians and infected some 100,000 more, although the infection and death tolls are likely much higher since the fast-moving disease kills many before they reach health centres.

Back in the capital, Denièse Thelor, a refugee living in the Toussaint Louverture camp who spends most days looking at the cracked and broken National Palace, said she was almost out of both patience and hope.

“They should proclaim the true results so that poor people can go out into the streets to earn a little money and take care of their children,” she said. “We are the ones who voted, not the CEP. They should give us who we chose.”

Late on Dec. 7, the CEP announced that 70-year-old Myrlande Manigat, candidate of the Rassemblement des Démocrates Progressistes Nationaux (RDNP), had 31.37 percent of the votes.

Manigat was followed by the candidate from the ruling party, Ignite (“Unity”), Jude Celestin with 22.48 percent, with compas singer Martelly from Repons Paysan (“Peasant Response”) right behind in third place, with 21.84 percent of the vote.

But angry voters in the capital, and many other parts of the country, claim Martelly should be in first place. He and his supporters say they don’t trust the CEP to recount votes, which Martelly called “a trap”.

With all the figures circulating in the media, one that doesn’t get much attention is the fact that, according to the preliminary elections reports, only about one-quarter of eligible voters actually voted.

Many would-be voters stayed away from the polls, disillusioned. Others were unable to vote because the elections administration was disorganised. According to the Conseil National d’Observation (CNO) observer group, violence and incompetence meant that dozens of polling places were closed early or the voting was outright annulled.

The CNO has also said it does not trust the CEP to do a recount.

As the week began tentatively, radio correspondents from all over the capital and the country were calling into their newsrooms to report “people are in the streets”, “things seem to be normal” and “a timid police presence”.

The CEP’s announcement, the ambassador’s statement, and the powerful rains on Sunday in the capital and the south likely kept would-be demonstrators home. But for how long?

Génèse Meselus, a 20-year-old who lives with her baby in a camp in was once the capital’s main park, the Champs-de- Mars, is watching and waiting – for the elections results and also for the long-promised housing for the 1.3 million camp dwellers.

Adjusting her baby on her shoulder, she affirmed: “If they give Mickey the votes, everything will be fine.”

But whether or not Meselus realises it, no matter who is proclaimed president, he or she, and the newly elected parliament, along with the “friends of Haiti”, are still faced with almost 1,300 camps housing some 1.3 million people, with thousands of tonnes of rubble, and with cholera now spread to all 10 departments, or provinces.

The CEP’s three-day complaint period ends on Thursday at 4 pm. Can the trial balloon stay afloat until then?

*Ralph Henry is a journalist working for AlterPresse (http://www.alterpresse.org) in Port-au-Prince, Haiti. Additional reporting was provided by Jane Regan.