SOUTH AMERICA: Rain May Disappear from the World’s Breadbasket

RIO DE JANEIRO, Dec 26 2010 (IPS) - South America still has vast extensions of land available for growing crops to help meet the global demand for food and biofuels. But the areas of greatest potential agricultural production — central-southern Brazil, northern Argentina, and Paraguay — could be left without the necessary rains. 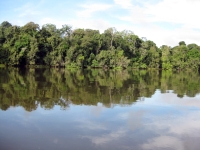 An island in the Amazon's Xingú River. Credit: Mario Osava/IPS

Every deforested hectare in the Amazon — a jungle biome extending across the northern half of South America — weakens the system that has been protecting the region from the desert fate of the Sahara, a third of Australia, and other lands located approximately 30 degrees latitude north and south, warns scientist Antonio Nobre, of the Brazil’s national space research institute, INPE.

Halting deforestation in the Amazon needed to be done “by yesterday” and Brazil’s official goal to reduce it 80 percent by 2020 is like “quitting smoking when you have advanced lung cancer; when you’re already dying,” Nobre told IPS. We should already be rebuilding the destroyed forests in order to restore equilibrium, he said, adding that monoculture of eucalyptus and African palm trees is not the answer.

“We don’t know where the point of no return is,” when forest degradation will become irreversible, and lands that benefited from the rains generated in the Amazon turn to desert, said the agronomist who lived 22 years in that region as a researcher, before joining INPE, in São José dos Campos, 100 kilometres from São Paulo.

The Amazon forest and the barrier created by the Andes Mountains, which run north-to-south through South America, channel the humid winds, now known as “flying rivers.” Those winds ensure rainfall for a region that is the continental leader in meat, grain and fruit exports, and a world leader in sugar, soybeans and orange juice.

The flying-river phenomenon, as established by climate researchers, led Nobre and other scientists around the globe to a new theory, the “biotic pump,” which explains climate phenomena, equilibrium and disequilibrium in the Earth’s natural systems — and in which forest biomes play an essential role.

Another climate phenomenon known as the Hadley circulation is also a component in the process. The air rises in the equatorial zone, warmed by the sun, forming the clouds that ensure the heavy rains that feed the tropical forests. At a certain altitude they move to the north and south, to about 30 degrees latitude in the two hemispheres.

On the Earth’s surface, the winds flow towards the Equator to fill the space left by the rising air, in a circular motion that removes moisture — creating a band where many deserts can be found: the Atacama in Chile, Namib in Namibia and Angola, and central Australia (Southern Hemisphere), and Africa’s Sahara, part of the Middle East and the southwestern United States (Northern Hemisphere).

For the most part, a large portion of the South American Southern Cone has escaped that desert fate, thanks to the rainfall generated by the Amazon. But deforestation is hurting this “long-distance irrigation.” The desertification of part of Rio Grande do Sul state, in Brazil’s extreme south, is a symptom of that, warned Nobre.

Another exception is southern China, with its subtropical forests. The Himalayan Mountains, in the northwest, serve a similar function to that of the Andes, redirecting humid winds and monsoons.

“Flying winds” is an expression made popular by a project of Gérard Moss, a Swiss naturalised Brazilian who, along with his wife, Margi Moss of Kenya, uses an airplane to track and study the humid winds as they leave the Amazon.

Every drop of water in the clouds has its “signature or DNA,” indicating if it is from the Amazon or the ocean. The idea is to identify the routes and amounts of rainfall that the Amazon provides for different points in Brazil, said Moss.

Brazil is “the nation of water, before Carnival or football,” because each year it registers rainfall of 13,400 cubic kilometres of water, he said. In central cities, like Brasilia, about 30 percent of the rain comes from “Amazon recycling,” although the precise figure has yet to be proved, said Moss.

The forests are “water pumps” that moisten the winds, proportionally more than the oceans do, according to Nobre. One tree has many leaves, which multiplies the surface area for evaporation, while the sea is a single surface, he said.

Nobre estimates that half of that water falls in the Amazon jungle itself, as part of a dynamic that suctions the humid winds of the ocean in a recycling that increases local rainfall and its extension towards the south, partially neutralising the effects of the Hadley circulation.

Furthermore, the forests along the wind routes resupply them with water, expanding the reach of the flying rivers. Without those “tributaries,” the winds would lose their moisture more quickly. Without the forest factor, the land far from the sea would tend to turn to desert, as is occurring in Eastern Europe.

“Where there is forest, there is rain” is an old saying of indigenous peoples — a truism that science took too long to recognise, because “it was more concerned with engineering than with nature,” said Nobre.

For rain to form, it needs micro-particulates upon which water can condense. Recent studies have shown that the Amazon forest emits organic vapours that act as the “seed” of condensation and rain.

But excess particulates — like smoke from fires, dust from arid or denuded land, and air pollution in general — has the opposite effect. As a result, in areas where fire is commonly used to clear land for cultivation or ranching in the Amazon, there is more drought.

Deforestation and burning reduce local rains and make the surrounding areas more vulnerable and inflammable, because the roots of the rainforest vegetation do not go very deep. In contrast, the typical plant species of the Cerrado, the Brazilian savannah, have deeper roots, having adapted to long periods of dry weather.

Although the pace of forest destruction is on the decline, it can still have a snowball effect, because each deforested area contributes to new losses. The increased frequency of Amazonian droughts between 2005 and 2010 has only caused more worry.

“The biosphere regulates the terrestrial system,” which has a sort of “thermostat” to balance itself, but humans are “capable of interfering with its metabolism” and destroying a level of stability that has lasted millions of years, said the INPE researcher.

Nobre believes that the planet is now in an “intensive care unit, with multiple organ failure.”

But he does maintain some optimism. It lies in the growing public awareness of the problem and in the latest scientific knowledge, which could even reverse the desertification process, he said, citing the example of Egypt, where reforestation of some areas of the Sahara region has begun.