KIKWIT, DR Congo, Jan 10 2011 (IPS) - When the ground is broken for the Kakobola dam, engineers just might be able to hear the jubilation in the city of Kikwit, 200 kilometres away. The city’s million residents are desperate to improve their water supply. 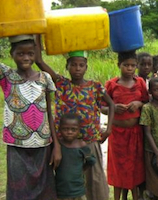 Construction of the hydro-electric dam is expected to begin on Jan. 15, and when it is complete it will enable the water utility to extend supplies of potable water to the 800,000 Kikwit residents who presently do without.

REGIDESO, the state-owned utility, manages 25 public standpipes that provide water to roughly a fifth of the city’s inhabitants. But even this limited network – installed in 2008 with support from the Belgian Technical Cooperation – is unreliable.

“The company recognises that there are technical problems with the works,” says Dieudonné Fundaboy, an official with REGIDESO in Kikwit. “We often run into financial dififculties, or problems obtaining diesel for the pumps. If we had regular electricity, the company could provide water 24 hours a day.”

Kikwit, the the principal city in the southeastern DRC province of Bandundu, briefly had a network supplying piped water to households between 1985 and 1992. But this was shut down in 1992 – REGIDESO says because customers were not paying their bills – and has fallen into disrepair.

So each day, beginning at 5 a.m., women, youth and children of various sizes, multi-coloured containers in hand, file through the streets of Kikwit in search of water. They range as much as two kilometres from their homes to draw water from streams or hand-dug wells, risking water-borne diseases – the city lacks proper sanitation – or being bitten by snakes in the dense bush along streams and the Kwilu River that flows near the city.

“When does the punishment end?” says Chantal Nsanga, swinging an empty 25-litre jerrycan. “I’ve spent more than two and a half hours doing nothing but looking for water, because my husband has to go to service.”

She is accompanied by her eight-year-old niece, solemnly carrying a calabash that might hold five litres.

“We lost three youths in 2008. They died. Suffocated when the earth collapsed over them as they were drawing water from a spring in the bottom of a ravine in Lukemi,” said another Kikwit resident, Rigobert Angwete. “To that, add many cases of drowning of children in the Kwilu River, especially in the dry season.”

Dr Paulin Kiyankay, the director of the Kikwit 2 General Hospital, told IPS that the city has experienced two serious epidemics of typhoid fever and one of cholera. “On a daily basis, nearly 30 percent of the cases handled by our clinics and hospitals are due to water-borne diseases.”

The president promised then that he would resolve the problem, but a decade has passed with little to show for this pledge before now.

Now the government is counting on the Kakobola dam to provide a solution. “If all goes well, work starts on Jan. 15,” says the mayor, Cyrille Kiyungu.

The dam and a 9.3 MW generating plant is funded by the Export-Import Bank of India, the latest in a series of loans showing growing involvement of the South Asian economic giant in Africa. India made a commitment to provide more than a quarter of a billion dollars of financial support to DRC in 2009, and the $42 million line of credit for Kakobola follows earlier loans of $33.5 million for buses and a cement plant, and $25 million for water pumps.

Wire reports indicate that the loan will be interest free for five years, before accruing 1.75 percent interest over the next 20 years. The loans terms also specify that an Indian firm will build the dam, and 75 percent of materials and services will have to come from India.

Construction is expected to be completed in 2013.