PORT-AU-PRINCE, Jan 7 2011 (IPS) - When diplomat Ricardo Seitenfus spoke out in interviews last month condemning the international community, he was dismissed from his post within days by the Organisation of American States. 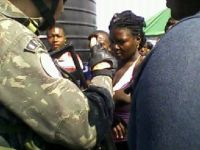 Dieula Rosemond moments before her husband says she was pepper-sprayed by the U.N. soldier seen in the left foreground. Credit: Joseph Rosemond

The OAS is overseeing a recount of ballots from November’s disputed election. The Brazilian said that at an election day meeting of donor countries and the U.N., he denounced contemplation of what amounted to a “coup” against President René Préval.

But Seitenfus reserved his harshest words for United Nations peacekeeping mission in Haiti, known by its acronym MINUSTAH, which his own country leads with 3,000 troops.

“I had hoped that with the anguish of Jan. 12 the world would understand that it had taken the wrong path with Haiti. Unfortunately, the same policy was reinforced,” he told Folha, a Brazilian newspaper.

“Instead of making an assessment, they sent in more soldiers. One should build roads, put up dams, take part in the organisation of the state, of the judiciary system. The U.N. says that is not its mandate. Its mandate in Haiti is to keep the peace of the graveyard,” he said.

Brazil’s Ambassador to Haiti Igor Kipman was resolute in his defence of Brazil’s leadership of the peacekeeping mission in an interview with IPS last month. He called its military branch “extremely successful” in creating stability and security.

Discussions are already underway about an exit strategy from Haiti, Kipman told IPS, but 2014 is a “good estimate” of when the withdrawal will happen.

“The success of a peacekeeping mission is inversely proportional to its duration. If you stay 20 years, it’s because you are not doing a good job,” he said.

The Brazilian Embassy declined to comment on U.S. diplomatic cables released by Wikileaks which described Brazil in 2009 as a reluctant partner in the peacekeeping mission, frustrated with a “lack of exit strategy”.

Another cable describes a Brazilian general offering to “occupy and maintain control” of Rio de Janeiro’s crime- ridden shantytowns, arguing that his troops were “specifically trained and prepared” for the job because of their experience in Haiti with MINUSTAH.

In Cite Soleil, tensions have simmered since the mission began in 2004. MINUSTAH was accused of indiscriminately shelling slum-dwellers and harming civilians during its first two years in the country.

“We Must Kill the Bandits”, a new documentary by filmmaker Kevin Pina, documents several graphic deaths that occurred during the assaults. “We are under extreme pressure from the international community to use violence,” a Brazilian commanding general said in 2005 testimony.

The mission says its operations resulted in a dramatic decrease in gang activity.

The peacekeeping troops are omnipresent in slum alleyways. Catcalls of “goat-stealer!” and “tourists!” directed at the troops are common.

On Dec. 6, U.N. troops escorted aid workers from the International Organisation for Migration (IOM), a leading U.N.-affiliated relief agency, on a distribution of humanitarian aid to Camp Imakile on the outskirts of Cite Soleil.

Imakile’s residents say IOM’s Luc Ondele, the agency’s Cite Soleil camps manager, had already threatened to cut off humanitarian aid if the camp continued denouncing IOM and other NGOs on the radio and in protests. He also offered to begin a cash-for-work programme for a limited number of people if they agreed to leave the camp, they say.

“We have a big problem in Cite Soleil. It’s a problem with the NGOs. They are discriminating against the people of Cite Soleil,” Imakile committee member Gerard Delme told IPS at a protest in October.

“We don’t accept Luc, the manager of IOM, at all, who has destructive politics. They’re offering cash-for-work to camps in an effort to destroy those camps and demoralise the people,” he said.

Ondele told IPS he was misunderstood. He says he told the camp committee that when they chant “Down with IOM” or “Down with MINUSTAH” it makes his job more difficult and dangerous.

Camp resident Dieula Rosemond was soon rushed to the Doctors Without Borders hospital.

It wasn’t cholera. Her eyes burned with intense pain. A U.N. peacekeeper pepper-sprayed her directly in the face during a distribution.

Her husband Joseph took photos of the distribution with his cell phone (see full series of photos at http://mediahacker.org). One shows a soldier standing next to a long line.

“They told us we had to stay in line and be quiet since the morning. If someone called to us, we couldn’t call back. If we sat down, they yelled at us to stand up,” said resident Allen Charles. She said a soldier suddenly called out to Dieula Rosemond and approached her.

Joseph Rosemond’s next photo is a close-up of blue-helmeted Brazilian soldier in fatigues. He’s holding up a white spray can across from Dieula’s face. She is standing in front of the camp’s water container with her arms crossed, looking down.

Joseph says that’s just before the moment his wife was sprayed in the face. In the next photo she is on the ground face-down with the camp residents crowded around her. She fainted, regaining consciousness in the hospital.

When IPS visited her in a hospital bed that day, she whispered weakly, “They sprayed me right in my eyes. I don’t know why. They really hurt.” A nurse said she was going flush her eyes out.

Rosemond maintains she did nothing but raise her voice against IOM. Camp residents said they didn’t throw rocks or act violently.

A U.N. spokesperson said she saw no incident report and had no further comment. IOM’s Ondele told IPS he would invite Joseph to a meeting with the U.N. peacekeepers to discuss what happened.

“There’s no war here. I didn’t threaten MINUSTAH,” Rosemond told IPS the following week. “Is it because I’m a woman or is it because I’m in Cite Soleil? I’m sending a message to the chief of MINUSTAH: am I going to take to the streets after I’ve become a victim or are you going to come talk with me?”

“IOM has said nothing to me. Because it’s their agent, Luc, who sent MINUSTAH here,” she continued. “I’m asking the international community, also Préval and the prime minister, the people responsible for MINUSTAH, I’m asking what are they going to come say to me.”

*Ansel Herz blogs at http://mediahacker.org. This is the second of a two-part series on the political and human rights struggles of Haitians one year after the country’s devastating earthquake.