Q&A: “In Mexico, We Have Let the Violent Ones Do the Talking”

MEXICO CITY, Jan 20 2011 (IPS) - “In Mexico, we have let the violent ones do the talking,” says journalist Marcela Turati, author of “Fuego Cruzado” (Crossfire), a new book that tells the stories of victims of President Felipe Calderón’s war on drugs, which has left an official death toll of 30,000 in four years. 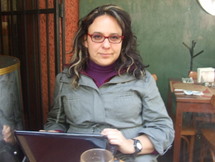 In her book, Turati gives a voice to people who have been widowed, orphaned, maimed or forced to leave their homes by the drug-related violence — the invisible victims of a conflict that is bleeding the country white.

Turati is now a freelance journalist, after working for different media outlets from Mexico and other countries. She has won international prizes for her work and is the co-founder and head of Periodistas de a Pie, an organisation of mainly women journalists focused on reviving social responsibility in Mexican journalism.

“Fuego Cruzado”, which is based on a year of coverage and interviews in the 10 Mexican states hit hardest by the conflict, provides a detailed look at the effects of the war on drugs. It was launched Jan. 14 in Mexico by the Grijalbo publishing house.

Turati, who sat down for this interview with IPS correspondent Daniela Pastrana, is also co-author of the book “La guerra por Juárez / El sangriento corazón de la tragedia nacional” (The War for Juárez), published in 2009 by the Planeta publishing house.

Q: How did you decide to write this book? A: On my journalistic assignments, I noticed that what I was seeing were not isolated cases; that there are hundreds of voices of people with shocking stories, and so many families and communities trapped in fear. I decided to cover the processes and stories behind the violence, because many media outlets offer news reports on the massacres, but few have returned to see what happened afterwards.

Q: The book tells 12 stories. Were any of them especially difficult? A: Yes…Actually there were three, one of which I thought about for months, writing scraps that I would later ‘unwrite’. It’s the one I call “collateral killings”, referring to the widespread description of civilian deaths as “collateral damages.”

I wanted to understand both sides, without just joining the chorus of voices calling for the army to be lynched, but without letting it off the hook either. I wanted to find the flaws in the system, the fear [the soldiers] have and the limited training they receive, and to show how they are trained to kill.

And I wanted to explain why, if you put soldiers on the streets [at the start of his term, Calderón called the army out for anti-narcotics police work], the results will always be the same: they kill, and they generally move the evidence and try to change what supposedly happened.

Another really complicated story was the one about children, because in Mexico the codes have broken down, and now children are targets of war. I met kids who have nightmares and kids who have survived shootouts. I remember one seven-year-old boy who I found curled up in a ball next to a car tire. He had been there for two hours.

There are children who play at being hired killers, and I wanted to depict all of that, what the most innocent victims are like, and what is going to happen with that entire generation, who are growing up this way.

And the first chapter, which is an essay on the ‘normalisation’ of death. That was hard for me because I myself didn’t understand how this machinery of killing was unleashed, and how we went from feeling shocked and horrified to being used to it all, and to tossing our 30,000 dead people into an unmarked common grave, so to speak.

Q: What led you to write this book? A: Being a witness to so much pain, going to Hell and then returning to the Federal District (Mexico City), which is really still a bubble, fills me with a sense of responsibility. I feel like I have to tell what I have seen, and add another layer to the discussion, because so far in Mexico we have let the violent ones do the talking.

We have only heard the government’s war rhetoric, and the messages of the ‘narcos’, issued by means of decapitated corpses. But behind each body are a family and a community that we have not heard from, and I think we’re afraid of seeing that.

But they are all our dead. We should rebel against the idea that all of them were killed because they were criminals, because we can’t know that until the cases are investigated, and in Mexico investigations don’t happen.

Furthermore, I don’t believe that this generation of trigger-happy people emerged because they drank some contaminating substance that made them want to kill. There were factors, past violence, and we are seeing the results — of that, and of impunity, of knowing that killing is easy and no one pays for it.

Last year 3,111 people were killed in Ciudad Juárez, and in El Paso [the adjoining city on the other side of the U.S. border] there were only five murders. How do you explain that? We have to rethink the causes and understand the consequences.

Q: You say that being a woman and covering sources with a focus on social issues had an influence on the book’s vision. A: Yes, of course. I still don’t know much about the drug cartels, and my stories fight for attention with noisier, more shocking coverage. But they give visibility to people who are invisible.

A focus on social aspects is something you train for and perfect, and it allows you to go beyond the ‘nota roja’ [sensationalist coverage of crime or other attention-grabbing news] and learn to distinguish between the strictly news aspects and the social phenomenon.

I have learned that a lot from Colombia, where some colleagues feel ashamed that they were late in discovering the victims.

Q: Is that what you have pushed for in the organisation you head? A: Editorial desks see the coverage of social issues as sort of second-class reporting. But there are groups of mainly women reporters who believe social questions are more important, because they are the issues that make sense to and reach the ordinary citizen.

That is what we have promoted in the Periodistas de a Pie network, to which some men belong, although still not many, who are starting to realise that this kind of focus is necessary.

Q: One chapter is dedicated to violence against journalists? A: Yes, it is essential for us to defend people’s right to be informed. I wanted to explain what happens once a reporter is silenced, how the criminals generate a kind of paranoia and panic with their messages, and how we all lose out in the end because of this dictatorship of silence that is being imposed.

Q: Do you think there is anything missing in the book? A: I wanted to write a chapter on women, who are the true heroines. Men wage war and women take care of their wounds or become spoils of war.

The other thing I would have liked to do is write a hopeful chapter on organisations that have started to do things in the face of the violence. But I was afraid of drawing attention to them, because activists are getting killed, and because these processes are just getting started.

Q: And why didn’t you write the chapter on women? A: I have seen so many things. When the bread-winner is killed [94 percent of the casualties are men] and the women are left alone to support their families. Then there are some who lash out immediately, demanding justice, going from homemakers to experts on security issues.

Or there are those who search for their missing loved ones, something that is always done by women, or are stigmatised by the rhetoric that blames the dead for their own deaths. Then there are the women who experience sexual violence, who are spoils of war for all of the different groups involved.

But the question of women is a book in itself.