KIGALI, Jan 21 2011 (IPS) - For years, the various campaigns for sustainable use of forests just passed Pascal Segatashya by. But Rwanda’s ambitious Forest Conservation Project eventually found him – and it has transformed his life and livelihood. 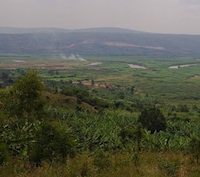 Most of his neighbours in a rural community in the Gisagara district in southern Rwanda are farmers, but the father of five made a living largely from illegally chopping down eucalyptus trees on his five-hectare holding to sell as firewood.

Ninety percent of Gisagara’s inhabitants are engaged in farming of one kind or another on fertile mountain slopes. As in many other parts of the country, the population here has been swollen by some of the more than three million people who have returned to the country from exile since the end of the 1994 genocide.

The growing rural population is hungry for land to farm, and wood for fuel and construction, threatening the loss of forest cover. Data compiled by environment web portal Mongabay shows that Rwanda’s use of wood for fuel rose by 60 percent between 1990 and 2005. Industrial logging also increased in this period.

Drawing on sources including the Food and Agriculture Organisation and the United Nations Environment Programme, Mongabay’s profile of the country’s forests might be expected to reveal a familiar story of accelerating deforestation, but instead Rwanda’s forest cover has rebounded from a low of ten percent to nearly 20 percent now.

Rwanda has made the protection of its remaining forests a priority, and set a target of increasing forest cover to 30 percent by 2020 – a goal it seems set to achieve well ahead of schedule.

The country is still losing precious primary forest – the almost complete destruction of the Gishwati Forest in the northwest between by people displaced by the genocide is an example – but this is offset by the aggressive campaign against unsustainable use of forests while promoting tree-planting across the country.

One day almost two years ago, while returning home in a pick-up truck loaded with wood, Segatashya was arrested for cutting down trees without a permit. He was jailed for several days on environmental degradation charges, in line with tough new measures by the government.

The arrest did the trick. Today – with support from local authorities – Segatashya is a convert to agroforestry. His plot holds a remaining stand of eucalpytus in one section, but other areas have been planted with avocado and mango trees.

Segatashya says his monthly income of $200 is roughly the same as it was before – but his present use of his land is sustainable and growing, where he was previously gradually destroying his source of income.

“The task [of tree maintenance] is very easy and I can earn money from selling fruit much more easily and without complications,” he told IPS.

Since 2009, the Rwandan government has dispatched agriculture experts to the local level all around the country, to train farmers on how to improve their land-use practices with a government seedling and afforestation programme.

The programme is intended to restore tree cover to deforested areas in several badly-affected regions of the mountainous country. The government is emphasising agro-forestry because it will provide a source of fruit and food and boost village incomes.

“The move which is dedicated to creating wealth for Rwandans, though planting trees will be the key emphasis by the government and its partners,” Rwanda’s minister of lands, environment , forestry, water, and mines, Christophe Bazivamo said.

But an environmental researcher from the National University of Rwanda – raising the criticism only on condition of anonymity – is critical of how the government has set about its mission.

“What is most important is to foster ownership and promote social participation instead of enforcing the law,” he told IPS, with reference to the kind of policing that saw Sengatashya spend several nights in jail. He also said funding for reforestation programmes is inadequate, and called for direct public finance to rebuild deforested areas.

Fabien Kayitare also has reservations. An expert with the International Fertiliser Development Centre’s CATALIST programme, he says local communities need to gain new knowledge if they are to successfully and permanently adopt new practices in forests.

“There is nobody to blame for deforestation, but it is important to introduce new alternatives dedicated to consume less fuel and save cooking time for poor.”

The CATALIST Project (Catalyze Accelerated Agricultural Intensification for Social and Environmental Stability) works with farmer organisations, NGOS and donors in Rwanda, Burundi and the Democratic Republic of Congo to boost production of staple foods, with an accent on sound environmental management and protection of biodiversity.

He points to the need for appropriate technologies to reduce pressure on woodlands, offering stoves as an example. “It is easy to see that in rural communities using improved cooking stoves [which burn wood more efficiently], the new technology needs far less biomass to cook the same amount of food.”

But enforcement of forestry regulations is a critical problem across most of Africa. Coupled with active support for alternative practices, the statistics suggest that sustainable use is taking hold, even against a background of growing use of wood products in the country.

Farmers like Segatashya are making the transition to becoming guardians of wooded areas and Minister Bazivamo is confident that the country’s campaign to plant one billion seedlings by 2013 will reinforce Rwanda’s progress still further.