KAMPALA, Jan 13 2011 (IPS) - John Garang, the revered late leader of the Sudan Peoples’ Liberation Movement, once said that women are the “the poorest of the poor and the marginalised of the marginalised”. As the reality of an independent South Sudan approaches, the region’s women have vowed they will not remain second class citizens. 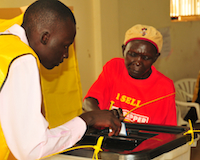 Margaret Michael Modi, the head of women’s affairs in Central Equatoria State, cast her vote on the first day.

“The first day (of the vote) we did not sleep. I went to the polling station and women were crying as they cast their vote,” she told IPS over the phone from the southern capital, Juba.

“For us the separation will be liberation. For so long, we were subjected to Islamic laws which limited our freedom in most ways, and coupled with the traditional values of the south, [women] remained at the bottom of society.”

Like many others, Modi expects that in an independent South Sudan, women will be in a better position to challenge limits on their freedom rights.

Mary Nawai Martin, a member of south Sudan’s Legislative Assembly from Ibba County in Western Equatoria State, is optimistic that separation will bring in a new era of respect for women’s rights.

“Women are eager for separation. There’s no woman I have met who didn’t say they voted for the separation. During the rule by the north, women had the least rights, they were the worst victims of the war,” she said.

Twenty years of bitter warfare have left south Sudan with an unusual demography: women make up about 65 percent of the population. Yet their representation in decision-making positions remains low.

The 2005 Comprehensive Peace Agreement states that a quarter of all positions in government organs in the South should be occupied by women.

Some of the region's state assemblies have failed to achieve this quota, claiming there is a lack of women qualified for these posts, but the majority have at least filled the required number of seats.

"Women are very keen. We are 52 percent of the voters taking part in the referendum and we feel that in the next government, [elected] women's numbers must reflect the voters," she said.

"We experienced the war and most responsibilities were shouldered by women as our children and husbands were taken to the many front lines. Now that peace is coming, we need to see the current representation of women - less than 10 percent of women in the executive organs - be increased to at least 30 percent."


There are no comprehensive statistics on rape in the south during the conflict, but researchers are agreed that such violence was widespread. One survey of 250+ women in Juba County by ISIS-Women’s International Cross Cultural Exchange found 36 percent had been gang-raped, 28 percent had been raped during abduction; other women reported being forced to have sex in exchange for food.

“Sexual violence took place and women are still living with trauma. So for us we see this separation as our first step to freedom and bringing dignity and respect to women of south Sudan.”

Gender-based violence has continued since the 2005 peace agreement. Women in Western Equatoria State have been vulnerable to a new threat from the Ugandan rebel group the Lord’s Resistance Army.

And closer to home, South Sudanese women face high levels of domestic violence, as well as early and forced marriages. Women are disadvantaged by cultural norms such as the paying of dowry and the practice of handing a girl child over to a bereaved family as compensation for murder.

Analysis by the United Nations Population Fund (UNFPA), highlights the fact that women in South Sudan lack access to justice on matters of sexual violations and reproductive rights, divorce and child custody.

“Over 90 percent of day-to-day criminal and civil cases are executed under customary law, which is largely not only inconsistent with international human rights laws, but also favor men,” the report reads.

These kinds of inequalities will need to be among the urgent priorities of a new state.

South Sudan has already developed a new interim constitution which spells out a Bill of Rights and acknowledges the right to equal treatment for both men and women. However putting such laws into practice in a country whose justice system is almost non-existent is a huge challenge.

“Women’s rights – especially protection of women from sexual violence and rehabilitation of those who suffered in the war – will need a lot of attention,” says Nawai.

“With the war, we didn’t have much time to push for other rights. Being alive was what mattered. We don’t expect the government to deliver all this there and then but we will be expecting improved efforts.”