CAIRO, Feb 10 2011 (IPS) - President Hosni Mubarak’s speech Thursday night in which he refused to quit has provoked anger and could spark further unrest. Massive demonstrations, and pitched battles between pro-democracy protesters and the regime’s security forces, have already been intensifying in every corner of the country. 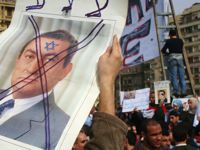 Protesters across the country are determined Mubarak should go. Credit: Cam McGrath

“The revolution appears to be happening just in Tahrir, but that’s because it’s very difficult for the press to get to other cities,” says activist Mohamed Hussein. “The government is preventing journalists from travelling to many areas.”

Large anti-government rallies have been reported in the northern Egyptian cities of Alexandria, Damanhour, Mansoura, Suez and Port Said; and in the southern cities of Assiut, Luxor and Aswan. On some days, more than eight million protesters have reportedly taken to the streets – about 10 percent of the Egyptian population.

Even El-Kharga, a remote oasis town 500 kilometres southwest of Cairo, has been caught in the storm. Witnesses say some 3,000 protesters demanding the removal of a local police chief accused of abuse, and calling for President Hosni Mubarak to step down, stormed government buildings and set them ablaze.

“The protesters set fire to the ruling party’s provincial headquarters, the traffic regulation authority, the courthouse and a police station,” Mansour Osman, a local antiquities inspector, told IPS over the phone.

Police responded with teargas and live ammunition, killing five people and injuring dozens. They also allegedly released inmates from the nearby maximum security prison – a tactic previously used in other cities to terrorise citizens.

“Police can be more brutal in the cities outside of Cairo as there are virtually no foreign journalists there,” says Hussein.

U.S.-based rights group Human Rights Watch said earlier this week that it could confirm at least 297 people killed since the uprising began on Jan. 25. The figure, however, was only tallied from visits to seven hospitals in Cairo, Alexandria and Suez.

As anti-regime demonstrations continue to spread across Egypt, workers dissatisfied with their low wages and poor labour conditions have staged a series of wildcat strikes that threaten to cripple the country’s reeling economy.

More than 20 small strikes, drawing from a few hundred to a few thousand workers each, erupted simultaneously across the country on Wednesday. Among these, 1,500 hospital workers held a sit-in to demand overdue bonuses, 3,000 railway employees demanding better incentives disrupted train services, and 750 workers at a soda bottling plant stopped production to protest poor wages and working conditions.

Meanwhile, several hundred protesters at a company affiliated to the Suez Canal Authority (SCA) staged a sit-in in front of the company’s headquarters in Ismailia, 120 kilometres east of Cairo. They called for the 7,000 workers affiliated with the authority to join them, demanding salary adjustments and unpaid incentives.

The Suez Canal is one of Egypt’s four main foreign revenue earners, generating nearly 4.8 billion dollars in 2010. It was the last key earner unaffected by the national crisis, which has reduced remittances, slowed oil and gas exports, and devastated tourism.

Labour rights groups say the outbreak of wildcat strikes across the country was a spontaneous reaction to new investigations into the hidden fortunes of Mubarak and his cronies.

“There was no plan to coordinate these labour strikes,” says Tamer Fathy, a spokesman for the Centre for Trade Union and Worker Services (CTUWS). “Workers were angered by press reports about the billions of Egyptian pounds stolen by the regime’s corrupt businessmen, and so they began to campaign for their economic rights.”

Fathy says many Egyptian workers have attended anti-Mubarak demonstrations as individuals, but until now labour organisations have not openly expressed solidarity with the popular uprising. But if the 22-million workforce links up with the pro-democracy demonstrations, it could create the perfect storm to bring down the regime.

There are indications the labour movement has already become politicised. Transit workers in Cairo walked out on Thursday morning, demanding salary increases and better representation. In a statement, strike organisers also called for the dissolution of parliament and the overthrow of the Mubarak regime.

Meanwhile, some 24,000 low-paid textile factory workers in Mahalla El-Kubra are striking to protest low wages and deteriorating conditions. It was a strike in this northern industrial town in 2008 that led to the creation of the April 6 Youth Movement, a leading force in the current national uprising.

Kareem El-Beheiry, a local labour activist and blogger, says textile workers have been participating in anti-Mubarak demonstrations as individuals since the beginning, and are now ready to put the full weight of their numbers into the uprising.

Vice-President Omar Suleiman has warned that civil disobedience “is very dangerous for society, and cannot be tolerated.” The former intelligence chief’s ominous tone and apparent threats to use brute force against protesters appear to have only hardened their resolve.

“We don’t have any choice at this point – we have to remove the entire regime,” says El-Beheiry. “Either we win (this revolution) or Omar Suleiman will kill every last one of us.”