MEXICO: Fasting for Life in Land of Death

CIUDAD JUÁREZ, Mexico, Feb 3 2011 (IPS) - “The moral reserve of this country is low. People have let too many things happen without taking to the streets…and they continue to let them go by,” peace activist Pietro Ameglio told IPS in this Mexican border city. 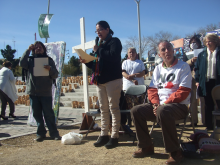 The conversation with the Italian-Mexican teacher, a member of the Peace and Justice Service (SERPAJ), a Latin American human rights organisation, took place on a cold night in a tent set up by a group of people fasting for peace at the monument to Benito Juárez in a downtown park in Ciudad Juárez, a city that looks eerily deserted after dark.

In this city of 1.3 million people that borders El Paso, Texas, “Night life is finished. On Friday there wasn’t a single customer in the bar,” said José Alberto Dávila, a local musician who remembers better times in a local sing-along “canta bar”.

Employees of El Centenario, the city’s oldest “burrera”, a restaurant that serves typical Juárez food, said the same thing: no one goes out after 10 PM if they can help it.

But last weekend, dozens of demonstrators from different social organisations occupied the area around the monument to progressive reformer Benito Juárez (1858-1972), the country’s first president of Indian descent, who gave his name to this border city.

In their overnight protest demanding a change in public security strategies, the activists marked both the Jan. 30 assassination of India’s Mahatma Gandhi (1869-1948) and the first anniversary of the Jan. 31, 2010 shooting of 15 youths, mainly high school students, at a birthday party in Villas de Salvárcar, a working-class neighbourhood on the southeast side of the city.

“Justice” was the word spelled out with candles on the steps of the Benito Juárez monument by the dozens of activists, who came from different parts of the country.

Ciudad Juárez, often described as the murder capital of the world, is a symbol of the failure of the so-called war on drugs launched in 2007 by the government of conservative President Felipe Calderón.

But while murders had already been spiralling over the last few years in Ciudad Juárez, where an average of eight people a day are killed in mainly drug-related murders, the massacre in Villa de Salvárcar marked the start of a new wave of mass killings.

The latest group killing, in which five young men were killed and three were wounded by gunmen as they played a game of indoor football, occurred on Jan. 24.

In another time and place, an incident like this one would have caused outrage. But here that is no longer the case. On Sunday, when the hunger strikers put up ribbons as a symbol of solidarity, a group of youngsters merely carried on with their football match next to them.

“We are young organisations and we don’t yet have a broad grassroots base,” Elizabeth Flores with the Pastoral Laboral de Juárez, a group linked to the Catholic Church, told IPS.

She listed factors that in her view are responsible for the low level of public participation in demonstrations and other activities in Ciudad Juárez: “The lack of rootedness of many people who weren’t born here and came in search of work, and the exploitative labour conditions in the maquilas (export assembly factories in tax-free zones), which leave people with little time to participate.

“But also, simply because we had never before experienced what we have seen in the last few years. We had never felt this kind of fear,” she said.

In 2010, 3111 people were killed in Ciudad Juárez, compared to just five murders in El Paso across the border.

Carmelite missionary Peter Hinde of Tabor House — a shelter for homeless people with HIV — has his own version: “The violence began with NAFTA (the North American Free Trade Agreement signed in 1994 by Mexico, Canada and the United States) which is impoverishing the country and is based on an economic system that favours drug trafficking,” he said.

“There is no better system for the narcos than this one,” said Hinde, a founder of Christians for Peace in El Salvador (CRISPAZ) who has been active for 16 years in the working-class settlement of Lomas del Poleo on the outskirts of Ciudad Juárez, where the bodies of murdered women began to show up in 1994.

This border city is notorious worldwide for the hundreds of unsolved murders of young women, mainly maquila workers, over the last 15 years.

On Saturday Jan. 29, peace activists also held a binational protest along the border fence that divides Ciudad Juárez from the prosperous, safe city of El Paso. At this spot, families gather for a mass every Nov. 2 — All Souls Day — for migrants who have died trying to cross the border into the U.S.

Jacinto Rodríguez, an 88-year-old bricklayer, was there with his four-year-old grandson, carrying a sign that he was given by an organisation in his neighbourhood, which read “Stop the Violence!”

“I came because it’s impossible to live in this country anymore,” he told IPS.

But many people in Ciudad Juárez are numbed by the violence.

After the murders in Villa de Salvárcar, the Calderón administration launched its “We’re All Juárez” programme to boost education, jobs and safety in the city. But the plan, now in its fourth edition, has brought few results although it has managed to demobilise the people, activists say.

In Villa de Salvárcar, there is a clear divide between parents demanding justice and others who only want to mourn their loved ones and who, holding tight to their faith, released white doves and balloons during Sunday’s mass, which was held in the neighbourhood’s new sports complex, complete with basketball courts and football and baseball fields.

The sprawling shiny new installations, built with two million dollars in federal money, look out of place in this dusty poor neighbourhood. But even more grotesque are the enormous signs with the Calderón government’s official slogan: “Vivir Mejor” (to live better).

The centre includes a “monument” to the 15 dead youngsters: a fountain with a dry tree in the middle.

“It’s pretty, but the price we paid for it was very high,” Luis Rodríguez, whose daughter was injured in last year’s shooting, told IPS.

His eyes are haunted by sadness. Since the massacre, the 17-year-old girl has become a recluse. “She wasn’t like that before,” he said.

On every street in the neighbourhood there are lonely, abandoned houses. One of them is across the street from 1310 de Villas del Portal, where the killings took place.

Seventeen-year-old Edwin used to live there. He was at the party when the gunmen burst in, and was hit by 11 bullets to the legs. Although he survived, his stepfather, who rushed into the building to try to save him, was shot and killed. The family moved away.

“We don’t trust anyone,” Edwin told IPS, before the mass was held.

The peace activists holding the overnight fast included members of organisations that defend the rights of migrants, groups that are seeking justice for the hundreds of women murdered, the children of victims of forced disappearance, Catholic and Protestant base communities, and parents demanding justice for the murders of their children.

The bishop did not show up. Nor did most of the city’s residents. But the activists were upbeat nonetheless. “It’ll be a long process; the important thing is that it has started,” said Baptist pastor Rebeca Montemayor.