Q&A: Meeting a World of Seven Billion with Optimism

UNITED NATIONS, Feb 3 2011 (IPS) - Before the end of 2011 there will be more humans on earth than in all of the planet’s 4.5-billion-year history. As the world steels itself to support its seven billion-strong population, Dr. Babatunde Osotimehin, the new executive director of the United Nations Population Fund (UNFPA), greets the impending challenges with gusto. 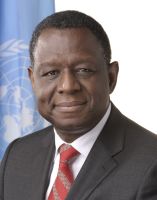 Armed with a total budget of close to 900 million dollars, and support from over 150 donors, including the Netherlands, Britain, Sweden, Norway, the United States, Spain, Denmark, Finland, Switzerland and Japan, the UNFPA begins its journey under new leadership on sound financial footing.

Taking its cue from the “rights-based approach” to development that was born out of the 1994 International Conference on Population and Development (ICPD), the UNFPA believes in “people, not numbers”. This framework is more important now than ever before, as the world’s population races ever-upwards.

With a strong focus on the empowerment of youth and the promotion of comprehensive reproductive health across the world, Dr. Osotimehin is determined to steer the UNFPA towards a future that addresses the needs of women and children, the world’s most vulnerable populations.

Q: What are UNFPA’s most urgent priorities for 2011, and the coming years? A: Firstly, greater visibility for the organisation and also accountability and transparency for all that we do. Secondly, this year will focus on youth and adolescence, particularly adolescent girls. In doing so, we will be addressing major areas of women’s development, which deal with maternal health, child marriages and family planning.

The areas most affected by a projected population of seven billion will be the developing world, 60 to 70 percent of which is under the age of 30. The next set of parents, the next generation who are going to make decisions about the world, all fall into that category. If we want to shape not only the population of the world but also the development of the world, then we have to begin with the youth and take an extremely comprehensive view of the challenges they face.

We must provide education that incorporates extensive information on sexuality and reproductive health, access to services, provision of employment, participation in social and political spheres, and total inclusiveness in the world’s processes. That’s where the difference is going to come from.

Q: How does the UNFPA plan to deal with the world’s one billion-strong slum population? A: There is no doubt that cities and megacities will continue to increase along with population. Our main strategy is to monitor governments’ responses to development plans that are affecting their people. But the UNFPA is not a large organisation and we obviously cannot deal with the issue of slums all by ourselves.

We will work with our sister agencies at the U.N., plus civil society and all of our development partners to ensure that national governments and member states do proper planning for housing and health, provide proper education, ensure inclusion in political processes, and ensure that young people have employment opportunities.

We will also push our own mandate of adequate information and services for reproductive health and reiterate the ability of every human being to make voluntary choices about their own lives.

Q: Can you give some “best practice” examples of UNFPA’s work with local, grassroots partners? A: There have been many. For example, we have implemented the Fistula Project in almost 50 countries, which reaches out to very remote areas via local partners and offers treatment and services to women suffering from fistula. This has been very successful.

We have also dealt successfully with the issue of female genital mutilation and cutting through our partners on the ground, not only by fundamentally changing the mindsets of the people, but also by provoking preventative legislation across the globe.

Q: What are some of the biggest challenges you face? A: MDG 5 [maternal health] is the primary business of UNFPA. We have been working on the ABCs of this problem for a long time, partnering with member states and putting in place programmes that address the issue. Maternal mortality is a fairly complex issue – it’s not just about the provision of hospitals, or the provision of doctors or nurses or midwives. It also involves various other interrelated issues such as transportation, culture, etc.

Forty-three percent, perhaps even more in some places, of maternal mortality is due to illegal abortions. We need to have systems in place that provide information to young people to enable them to make choices on their own and avoid life-threatening situations. In countries where abortions are legal, such services should be safe.

Q: Do you see environmental issues as inherently related to the work of the UNFPA? A: To the extent that issues of migration and climate change affect women and children, yes. One of the issues that is terribly overlooked is the problem of desertification – this forces women to travel much longer distances in order secure bare necessities like wood for fire and water. Children are forced to travel back and forth, making them increasingly vulnerable.

Desertification also induces migration, which creates an even greater climate of vulnerability for the displaced or migrant populations and sometimes leads to conflict. And conflict, as we know, disproportionately affects women and children.

Q: What have been UNFPA’s greatest strengths in the last decade? A: Our ability to promote sound reproductive health and rights across the world. We have now increased knowledge about sexual education, we have promoted access to family planning commodities, we’ve been able to work with governments to talk about the prevention of HIV/AIDS, [and] we’ve done far more in terms of maternal health.

We’ve enabled governments to utilise the “one-stop-shop” model, where they can integrate various reproductive services. In the last year we’ve also worked more closely with our partners, particularly the H4+ [UNAIDS, World Bank, UNICEF, World Health Organisation and UNFPA], to work with the secretary-general on his global strategy on women and children’s health. Through this initiative we have worked with as many as 25 countries to commit themselves to working actively on women and children’s health, including reproductive health.